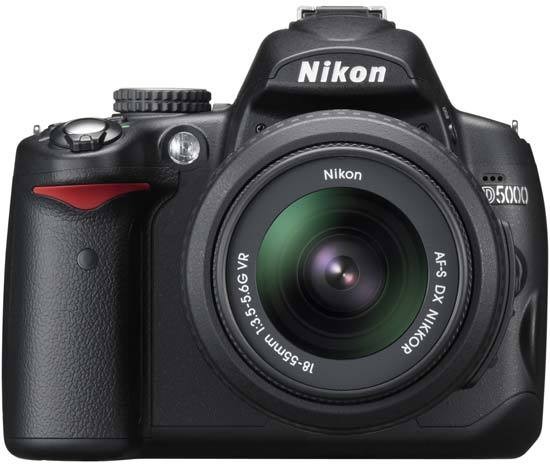 All of the sample images in this Review were taken using the 12.3 megapixel JPEG setting, which gives an average image size of around 5Mb.

During the review, the Nikon D5000 captured photos of very good quality. Colours were usually spot on, and the automatic white balance system worked quite well.  Active D-lighting managed to squeeze most of the dynamic range captured by the sensor into the JPEGs the camera produced. Resolution at base ISO proved enough for some seriously big prints. Noise, while detectable if you deliberately looked for it, did not pose a real problem until you went above ISO 1600, and even then it remained low enough to to allow small to mid-sized prints to be made. Red-eye was not a common occurrence with the built-in flash, and when we did encounter it, it was very moderate and easily cured by setting the flash to red-eye reduction mode. The camera also proved very well suited to night photography, with no hot pixels appearing in night shots with long-exposure noise reduction turned on. Curiously, matrix metering proved somewhat less accurate than with the D90, prompting us to use exposure compensation much more often - despite the fact that the two cameras use essentially the same metering system.

Although in some cases, you can detect some shadow noise even in photographs taken at relatively low ISOs, it does not have much of an impact on the final output up to, and including, ISO 1600. From then on, noise starts to limit the maximum print size at which the pictures still look good, but even an ISO 6400 shot should be OK for prints of at least 13x18cm. Colour saturation is also well maintained up to ISO 3200, though it does drop noticeably beyond that.

The Nikon D5000 also has ISO Sensitivity Auto Control, activated from the shooting menu. If set to On, the camera will automatically adjust the sensitivity if proper exposure cannot be achieved at the value chosen by the photographer. The user can put a limit on the maximum sensitivity selectable by the camera.

The file quality settings available on the D5000 include Basic, Normal and Fine for JPEGs, plus you can also store your photos in Nikon's proprietary raw format (NEF).  Here are some 100% crops which show the quality of the various options, with the file size shown in brackets.

The pop-up flash on the D5000 has several settings including Auto, Fill-in flash, Red-eye Reduction, SlowSync, Red-eye Reduction with Slow Sync, Rear-curtain Sync and Off. The mode of operation can be TTL, Auto or Manual, and there is Flash Exposure Compensation (FEC) available as well. Note however that unlike the D90, the D5000 cannot control wirelessly slaved system flashes. These snaps of a white ceiling were taken at a distance of 1.5m using the kit zoom.

And here are a couple of portrait shots. The built-in speedlight caused only a minor red-eye effect in this test, which could be fully eliminated by setting the flash to red-eye reduction mode.

The Nikon D5000 lets you dial in shutter speeds of up to 30 seconds and has a Bulb mode as well for exposure times of practically any length, which is very good news if you are seriously interested in night photography. There is an optional long-exposure noise reduction function that can be activated to filter out any hot pixels that may appear when extremely slow shutter speeds are used. Do note that this works by way of dark frame subtraction, which effectively doubles the exposure time. The shot below was taken using a shutter speed of 10 seconds, aperture of f/11 at the L1.0 (ISO 100) sensitivity setting. We've included a 100% crop for you to see what the quality is like.

The Nikon D5000 does not offer body-integral image stabilisation, but the kit lens bundled with the camera features Vibration Reduction, Nikon's proprietary lens-based optical stabilisation system. This allows you to take sharp hand-held photos at slower shutter speeds than with lenses that lack this function. To illustrate this, I took two photos at the long end of the zoom, with VR turned on and off. At a shutter speed of 1/15 second - which is rather slow for this focal length - the photo taken with VR was still commendably sharp, but the one without VR was decidedly blurred, as the 100% crops below clearly show.

D-lighting is Nikon's dynamic range optimisation tool that attempts to squeeze  the full dynamic range of the sensor into JPEGs. The available settings are Off, Auto, Low, Medium, High and Extra High. The following examples demonstrate the difference between the two extremes, Off and Extra High.