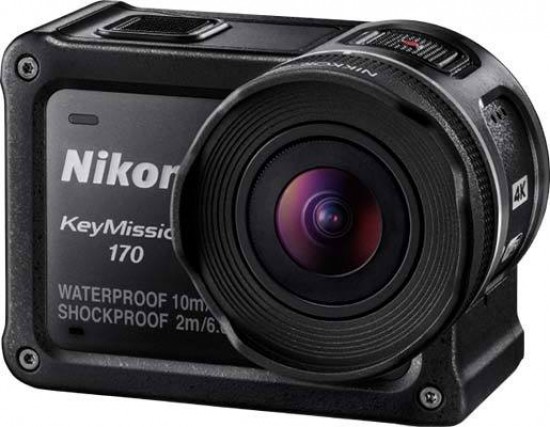 The Nikon KeyMission 170 is a new action camera, which features 4K UHD video recording, along with a 170 degree field of view lens. The camera is waterproof down to 10 metres (or 40 metres with the optional additional waterproof housing) and shockproof from a height of 2 metres. It is freeze proof down to temperatures of -10 degrees. As well as capturing video footage, you can also capture stills with the camera. As is becoming standard with most Nikon cameras of late, the KeyMission 170 is equipped with Snapbridge bluetooth technology. The camera’s biggest rival is probably the GoPro Hero 5, which is available for around the same price and features a similar design. The Nikon KeyMission 170 costs £329 / $399.

The Nikon KeyMission 170 uses a classic action camera design, which has been made popular by the likes of GoPro. Indeed, it is very similar in shape and size to the latest GoPro Hero 5.

It’s a very small camera, which easily fits into the palm of your hand. It’s also pretty chunky however, so you may struggle to fit it into a slim jeans pocket, but a coat pocket should be no problem. The design features a rectangular boxy shape for the camera, with a rounded, protruded lens on the front.

The design is pretty simple, with just a few buttons on the Nikon KeyMission 170 which you use to adjust settings. On the top of the camera there’s two shutter release buttons, you can press down either to switch on the camera. On the left hand side there’s the video shutter release, while on the right hand side is the stills shutter release. This is a great way to use the camera for both functions without having to go into a menu to change the setup.

On the back of the Nikon KeyMission 170 there are three buttons. An OK button, and above it an up button, and below it, a down button. Press the OK button to bring up the camera’s menu options. The menu is divided into four sections - the first option takes you back to the shooting screen, the second option takes you to playback, the third option allows you to change certain settings, while the fourth option switches the camera off altogether.

If you enter the settings area, you navigate around using the up and down keys, and pressing OK when you want to change a setting. You can alter things such as movie setting, date and time and more. Unlike with the GoPro Hero 5, there’s not too much in the way of manual settings and alterations you can make, although there is the option to change exposure compensation and white balance.

Using the menu is easy, but it’s quite cumbersome having to use the up and down keys, and then having to scroll to the top of the menu to go back one step. It would be much easier if the screen was touch sensitive - but with the option to use the buttons for situations when using a touchscreen can be tricky (i.e. underwater).

There is a door on the side of the Nikon KeyMission 170, behind which is the charging port, the memory card slot and the battery. The door itself is sealed as the camera is designed to be used underwater - in order to open it you’ll need to push open a latch in a two-step process which should prevent any accidental openings when you don’t want it to.

The battery, unlike the cheaper Nikon KeyMission 80, is removable. That’s good news if you think you’re likely to want to film for longer than the 60 minute battery life that a single charge provides - you can buy a spare battery ready for such problems.

If you switch on the Nikon KeyMission 170 when there’s no Micro SD card inserted, it will beep and a red LED light will flash in the corner to warn you that you won’t be able to record any stills or video - this is good for saving you from accidentally trying to use the camera without any memory inserted.

The Nikon KeyMission 170 is compatible with the SnapBridge app, which has a special version for the KeyMission 170 and KeyMission 80 cameras. You can download the app for free from the App Store or from the Google Play store.

To get setup with the Nikon KeyMission 170 is easy - you just need to find the appropriate connection settings page in the menu. You’ll find it under the settings square, and then camera settings, and then Network menu. The good news is that once the connection has been made, you won’t need to faff around setting it up again. You can set it up so that images are automatically transferred across to your phone while the connection is maintained - you may want to resize images to 2MP for quicker transfer. If you have a Nikon Image Space Account, you can choose to automatically upload to that as well.

You can also use your phone as a remote control for the camera, but you’ll need to connect via WiFi for that. Again, that’s a relatively straight forward set up, you just need to find the password from the main menu on the KeyMission 170. Once connected, you can take still images or record video, saving straight to the phone (as well as the camera). You can choose to download a resized version of your image (2MP), again for quicker download speeds.

Supplied in the box is a remote control too. You can use this to switch on the Nikon KeyMission 170, record movies and take pictures. There is also a function button which can be customised to a different function depending on what you think you’re likely to want to do often. There is a status lamp on the remote control, so you can see when the camera is recording or taking a picture.

Also supplied in the box is a mount adapter and base, which you can use to attach the camera to a surface - such as a bike handlebar.