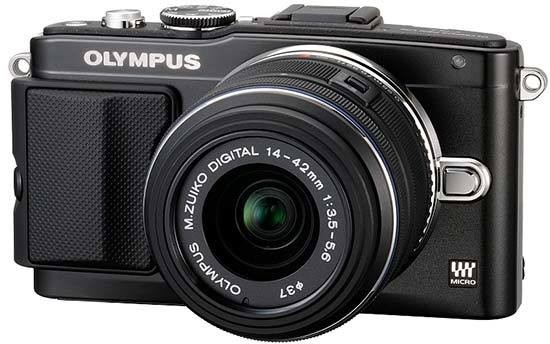 The E-PL5 comes bundled with the distinctly plastic-y feeling, retractable M.Zuiko Digital 14-42mm f/3.5-5.6 II R lens (one of over 20 available dedicated Micro Four Thirds lenses), with an interchangeable 'decoration ring', and the same sleek, chic retro styling we'd expect from the Pen range. It feels reassuringly solid when held in the palm. Dimensions are 110.5 x 63.7 x 38.2mm without protrusions and the camera weighs 279g body only. This latest Olympus is available in silver and white along with our more traditional black and chrome detailing review sample.

The E-PL5 has a new angle adjustable, wide-screen ratio tilting LCD screen at the rear. It's 3-inches in size, offers a widescreen aspect ratio and comes with a respectable 460k dot resolution, so visibility is certainly clear enough if not quite a match for the OLED screen on the E-P3 model. In respect of its adjustable LCD it recalls Sony's NEX series, and also mirrors its rival in the fact that said screen can be pulled out from the body and tilted up or down, and now upward by 170 degrees to face forward for self-portraits. It can't, however, be swung out through 180° so that it is parallel to the chassis, like on a camcorder. Nor can it be turned so that the screen is facing the body for added protection against scratches when being transported (without lens) in a jacket pocket.

While its angles of adjustment are slightly restricted then, it's now a touch screen like the one on the E-P3. You can for the most part get away without using it much at all, as there are a plethora of physical buttons ranged alongside it, which are either dedicated to specific functions or can be customized to suit. Indeed, the screen's implementation here hasn't led to a cleaner or more pared-down minimalist look for the Pen, as say the touch screen on Panasonic's latest GF5 has.

Once again there's no viewfinder supplied here as an alternative to the LCD screen, though there is an accessory port Version 2 to be found above the screen at the E-PL5's rear. Sadly our review sample didn't come with a Flash Air memory card, so we can't comment on the E-PL5's wi-fi capabilities. Another welcome attribute this model shares with the flagship OM-D E-M5 is a claim for the world's fastest auto focus system, thanks to 35 AF points spread over the entire LMOS sensor, plus a TruePic VI processor to keep performance zipping along. Full time AF and AF tracking also feature.

Low light sensitivity has been boosted on this latest Pen, incrementally extendable from ISO12800 to a semi pro-like ISO25600, as on the E-M5. This is partly down, says Olympus, to the implementation of the noise reducing TruePic VI processor.

The handholding Live Guide mode helps novices achieve more professional results is included on the E-PL5 too, with, as on the E-P3, its features selectable by tabbing up and down a visually-led menu that appears running down the right hand side of the screen. In this way the likes of depth of field/background blur can be adjusted in real time by dragging a simple slider bar.

There are now 12 creative Art Filters on the E-PL5, one more than on the E-M5, all applied at the point of capture. Included here are our preferred choices of pinhole and dramatic tone, joined by the tilt and shift lens ape-ing 'diorama' for rendering cityscapes as if on a toy town scale. Though the latter is a fun tool, we feel this miniature option works less well on the Olympus Pen than its competitors; for us the Pen seems to blur too wide a portion of the frame, so that occasionally the result can resemble a mistake rather than an effect. Once again, these filters can be applied to Full HD video as well as stills, recordable in AVCHD or reduced resolution Motion JPEG format. Just press the dedicated video record button when in Art Filter mode.

Alongside body integral image stabilisation, something that gives the Pen the edge over the Panasonic Lumix G range, Full HD video with stereo sound is included as standard, with left and right microphones positioned either side of a vacant hotshoe - the latter a feature that might also position it one step ahead of arguably Panasonic's closest rival in the Lumix DMC-GF5. If it weren't, that is, for the fact that what is more unforgivably omitted here is the luxury of a built-in flash of the pop-up variety - a feature that the E-PL5's intended consumer audience is surely going to miss. Just… why Olympus? After all, the original E-PL1 and E-PL2 had integral flash, and the flagship E-P3 now has it, an implementation long overdue.

Instead, with the E-PL5 a separate plastic-y clip-on flash is included in the box that we can see getting lost down the back of the sofa, or simply forgotten when you head out for the day with your shiny new camera. Admittedly the flash does look quite cool when slotted into place and works effectively, but it does inevitably add to the camera's bulk.

The E-PL5 now has the newly added ability to fit the optional supplied handgrip, as with the E-P3. Without the handgrip, unscrewed in the field with the aid of a coin, the solidity is sufficient to be able to still hold the camera nice and steady when shooting handheld, and without the workmanlike black plastic grip the camera actually looks a lot more stylish, its brushed metal faceplate fully on show.

From the front then, and with or without attachable flash, the E-PL5 very much looks the part and worth the outlay, exuding a cool sophistication, at least in respect of our traditional black review sample. It has that 'classic' Pen clean look, with an AF illuminator/self timer lamp top right of the lens, springy lens release button just below, Micro Four Thirds logo bottom right and Olympus logo top left.

Moving up to the top plate, the E-PL5 locates a speaker, with stereo microphones flanking the adjacent vacant hotshoe. This comes with a protective plastic cover that also loops over at the back to at the same time protect the accessory port against dust and other nasties. Set into a strip to the right of the hotshoe - if viewing the camera from the back - are a dime-sized shooting mode dial, small but obvious shutter release button and, lastly, inset into the top plate, the power button.

Give the latter a press and if you haven't first manually extended the bundled retractable zoom lens, an on-screen text message prompts you to do so. So getting ready for the first shot is a two-tier process: either extend the lens first then press the power button or vice versa. Once the lens has been unfurled the camera is ready for its first shot (or video) in just under two seconds. A half press of the shutter release and there's a very brief wait while the focus visibly resets. Go on and take the shot and with no discernable shutter delay, a Fine quality JPEG and Raw file are committed to memory in two to three seconds, which is nothing to complain about.

On the back of the E-PL5 in the top-right corner we get small self-explanatory playback and image deletion buttons alongside each other. With the accessory port dead centre above the LCD screen, to its right is a further trio of buttons. We get a function/thumbnail display button and an image enlargement button next to it, plus, at the top hand corner of the backplate, a dedicated video record button, positioned where it ergonomically falls under the thumb as the camera is gripped in the right hand. Hit this and recording begins no matter what alternative stills shooting mode might be in play at the same time, the black bands cropping the left and right of the screen when shooting in default stills mode disappearing so that the entire screen is taken up with the image being recorded.

The function button is also the means by which as a default the E-PL5's Live Guide feature is brought into play, and the order in which the offerings are presented and what they actually are is identical to that found on the E-P3 . The Live Guide options are presented as a colourful toolbar on the right hand side of the screen. From the top we have the ability to change colour saturation, from 'clear & vivid' to 'flat & muted', next down is the ability to alter 'colour image', which translates as shifting the tone between warm and cool via slider bar, with the third option shifting brightness/exposure between a simple bright and dark. The fourth option down is probably the most interesting/effective in that it provides the ability to incrementally blur the background of your shot by again dragging an indicator on a slider - thus providing a similar shallow depth of field effect to that achievable with a DSLR and suitable aperture.

For its fifth Live Guide option Olympus has retained the curiously named 'Express Motions', which to us has always sounded more like a bowel movement than the actual emphasizing of subject motion by introducing blur. Well, in fact, there's the option to both blur any movement or stop it in its tracks, again achievable by dragging a slider indicator. The last option on this tool bar is a on-board shooting hints and tips manual, with the usual 'suspects' of photographing children and pets given the most prominence ('take a picture at their height level' being a summation of the level of advice imparted). We even get tips, as a bit of closet advertising, for attaching Olympus accessories, such as lens converters.

With a plastic/rubberized thumb pad just beneath the video record button, the final controls on the E-PL5's backplate are identical to its predecessor. An info button and separate menu button sit above and below a standard multidirectional control pad, encircled by Olympus' love-it-or-hate-it scroll wheel set up.

At 12 o'clock on the control dial is an exposure compensation control (+/- 3EV), at three o'clock a compendium of flash settings (auto, red eye reduction, fill in flash, flash off, red eye slow sync, slow sync, 'full' flash and incremental adjustments running from ½ to 1/64th strength), at six o'clock we get self timer/drive modes, and at nine o'clock the ability to manually specify the AF point, by selecting a point on a 35-zone grid that is overlaid on the real-time image. Dragging a finger, and so the AF point, around the touchscreen will achieve the same end, though inadvertently subsequently taping it will cause the shutter to fire. Yes, this facility can be deactivated by prodding the relevant shutter button icon on the touch screen, but it's just as easy to accidentally turn it on again; even via an action as incongruous as the button of your shirt connecting with the screen as you're wearing the E-PL5 on a neck strap, or the thumb of your left hand straying as you handle the camera.

While chunky lugs for attaching said strap hang at either side of the camera, thankfully out of the way of fingers and controls, on the right hand flank, if viewing the camera from the back, as with the E-PL3 we find a pair of covered ports for joint USB/AV output and mini HDMI output respectively. This cover, being a weaker plastic element amidst the surrounding brushed metal, is one of the very few flimsy points on the outwardly covetable camera.

Also plastic-y, but more reassuringly chunky, is the flip open cover protecting the joint battery and card compartment at the E-PL5's base. The PS-BLS5 rechargeable lithium ion battery supplied with the E-PL5 is good for around 360 shots, 10% more than the E-PL3. There is the option here to use all varieties of SD media card too, up to and including SDXC cards. Dead centre, but slightly off-centre of the lens, is a screw thread for attaching a tripod.