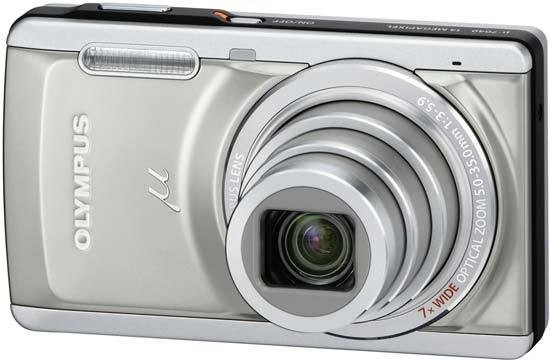 All of the sample images in this Review were taken using the 14 megapixel Fine JPEG setting, which gives an average image size of around 6Mb.

During the test, the Olympus mju 7040 produced images of mixed quality. At most focal lengths and subject distances the lens can really only keep up with the sensor's increased resolution in the central area of the frame - as you move toward the edges, the lens' resolving power becomes increasingly inadequate for the tiny, pixel-packed sensor. The jump to 14 megapixels took its toll on the signal-to-noise ratio as well, with noise now creeping in even at the lowest sensitivity settings. As for the apparent dynamic range, the manufacturer's Shadow Adjustment Technology sometimes works wonders; but at other times, it produces absolutely weird, unrealistic colours and invariably makes shadow noise more apparent in your pictures. The night shot came out okay-ish, but the camera is very reluctant to use truly slow shutter speeds, which is why it is not the ideal tool for night photography.

In P mode you can set the ISO speed yourself, while in the other shooting modes, the camera picks the right sensitivity setting at its own discretion. Like its predecessor, the Olympus mju 7040 shows a degree of self-restraint by stopping at ISO 1600 (some earlier Olympus compacts offered speeds of up to ISO 10,000) - unfortunately, it's still too much for the tiny, pixel-packed sensor to handle. For the most part, ISO 200 is OK and ISO 400 is usable, but sometimes you can easily see noise at the lowest settings too. Check out the darker regions of the sunset shot on the Sample Images page for evidence. Here are some 100% crops which show the noise levels for each ISO setting.

The Olympus mju 7040's lens offers a very versatile focal range, as demonstrated by the examples below.

The Olympus mju 7040 shoots JPEG only, and the available file quality settings are Fine and Normal. We have included a couple of 100% crops for you to see what the quality is like.

The Olympus mju 7040 handled chromatic aberrations excellently during the review, as shown in the example below.

The flash settings on the Olympus Mju 7040 are Auto, Red-eye reduction, Fill-in, Off. These shots of a white ceiling were taken at a subject distance of 1.5m. The lens exhibits some vignetting even when the flash is turned off, and you can see evidence of this in some of our real-world sample photos too. Use of the flash makes this worse, at least at the wide end of the zoom, where its coverage is not enough to evenly illuminate the frame.

The available flash settings include Auto, Fill-In, Redeye Reduction and Off. Redeye is a problem that the Redeye Reduction setting is able to reduce, as you can see here. Of more concern is the autofocus performance, which is quite poor in low light - the examples below are a testament to this too.

The Olympus mju 7040 is not particularly well suited to night photography. The slowest shutter speed I have been able to trick the camera into is just ¼ of a second in P mode, which is why I took the night shot below in the Night Scene mode, in which the 7040 chose a shutter speed of 1.6 seconds at ISO 100.

Shadow Adjustment Technology or SAT is Olympus' solution to lifting the shadows in a contrasty scene, without blowing out the highlights. In some cases, like in the example below, it worked really well, with the only problem being the more prominent appearance of shadow noise. In other cases, it unfortunately produced weird unnatural colours, which means you will really want to use this feature with caution.