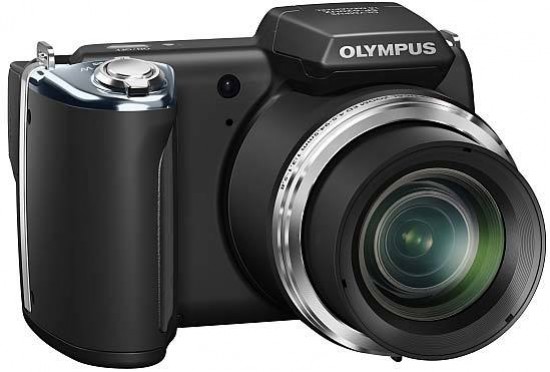 All of the sample images in this review were taken using the 14 megapixel JPEG setting, which gives an average image size of around 6.5Mb.

Noise performance on the Olympus SP-720UZ and - indeed - on many of the new digital compacts that the company have released seem to have a painted feeling about the pictures. This indicates an application of noise reduction, which is pretty worrying when it can be seen at ISO 100. Still, contrasting lines and edges are sharp with no degradation that you'd normally see if noise was being too much of a pest.

At ISO 200, there's definitely evidence of noise in darker areas although this can only really be seen at full magnification. Noise reduction starts to block the colour invasion by desaturating colour from the picture. Unfortunately this also means removing colour from the picture that needs to be there so the pictures start to look a little flat. At ISO 800, the camera gets a hold of the noise and the quality improves slightly. There's still plenty of JPEG artefacts in the image and some loss of colour.

However, at ISO 1600, the noise rages back into the pictures and edge definition starts to deteriorate. Coloured spots start to appear bigger and more colourful while colours that should be in the picture dissipate even further. By the final ISO 3200 shot, image quality is nearly gone. All types of noise aggressively attack the picture with blotches of green and blue all over. Saying that. It's not the worst case we've seen at this setting so it's not all doom and gloom.

The processor of the SP-720UZ sharpens the pictures to within an inch of their lives so we found that the pictures don't really need a boost.

We managed to find traces of chromatic aberration but only in high contrast areas. It's most noticeable in the branches of trees but don't get that mixed up with lens flare.

There are two macro modes but only one that really needs to be addressed. The macro mode has a close focusing of just 30cm (the same distance if you leave it on normal focusing) but can get to 1cm in Supermacro. There's a lot of lens distortion at this setting if you have any straight lines in the shot. There's also a lot of image fall off with only the centre of the frame really being sharp.

Adding flash to pictures these days doesn't tend to show because of the progression in technology has made them more intelligent. On the SP-720UZ it is possible to see that the flash has been used. However, the camera doesn't seem to suffer from vignetting even without the flash.

We didn't get any issues with red-eye either but there's a red-eye reduction flash option if you decide you want to use it. The red-eye system uses a strobing flash to reduce the size of the pupil and reduce the amount of red-eye in the picture. The remaining colour can be removed in post processing if desired.

The Night scene mode has produced a nice shot that's sharp, well exposed and has a decent colour cast to it. In Night mode, the camera extends the shutter speed to allow for longer exposures. Program mode doesn't have that luxury so the picture looks a lot darker.