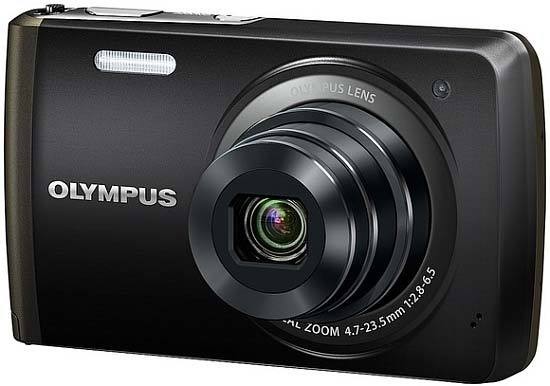 The Olympus VH-410 is a dinky digital compact camera that features a 5x optical zoom ranging from 26-130mm, a 16 megapixel sensor, Eye-fi card compatibility and a metal body. Most notable is it's "Touch to shoot" feature that enables the photographer to take pictures just by touching the part of the screen they'd like in focus. Priced at around £120, the Olympus VH-410 is available in blue, black, pink and silver.

It's really not because of the pink colour coding that we think that the Olympus Stylus VH-410 is perfectly suited to women. The whole design of the camera seems to be appropriated towards them. From the elegant front face to the sleek and glossy back, it's apparent that this isn't a masculine camera.

The lens sports a 5x optical zoom which stretches from a respectable 26mm to 130mm in 35mm terms. It sinks fully into the body so that the Olympus VH-410 is completely flat when not in use. This makes it ideal for slipping into a pocket or bag. On the top of the camera, the power button and shutter release are both black plastic and the only thing to differentiate them is the size. It could be difficult to see them in the dark, say on a night out. To incorporate the flush shutter release button, the zoom has been switched from a wrap around style seen on most digital compact cameras to a less used rocker switch.

To keep up the stylish design, the back of the Olympus VH-410 has a 3-inch LCD screen that seems to extend itself around the few buttons on the right side of the camera. The only three buttons are to start video recording, which is in the top right corner; playback images taken and access the Main menu. The ring also has two other options. Pressing up will scroll through Information options. That is, it'll show you various options of information on screen. The standard view is a clear screen with the Quick menu options down the right side and a Touch-to-Shoot button to the left. Pressing it once brings up a grid overlay which will help framing and composing photographs. Press it a second time and all information disappears. After that, it scrolls back to the beginning.

On the surface, the Olympus VH-410 has the approach of being a camera that is easy to use and nice to look at. At this point in the review, we're inclined to agree. It seems to be ideal for the target audience.

While the design has been well thought out, the Olympus VH-410's build quality isn't the highest calibre. The front is shiny – as is the back - and it gives the camera a sexiness that's ideal for the target audience. However, the top plate leaves a lot to be desired for. Well, just the section with the buttons on really. For some reason, Olympus have decided to use a rough plastic on this part which simply feels lacklustre. The buttons are well built, they're firm and responsive.

The main element of the marketing campaign for the VH-410 is it's Touch-to-Shoot system. It works well; the screen is sensitive enough to obey commands without being too over zealous. The performance of the screen is great. It's bright and clear although there's a hint of motion blur. With a bright spot, such as a window, the screen does suffer from purple banding. The lithium ion battery is located on the bottom of the camera in a compartment that it shares with the memory card. You can use any format SD card up to SDXC and including Eye-Fi. For the uninitiated, Eye-Fi is a wifi enabled memory card. You can program it to upload your pictures when you enter a wifi enabled hot-spot.

There are two menus available on the VH-410. The most accessible is the Quick menu. It's the one you see sitting down the right side of your screen when taking pictures and is by and large the most used. It allows you to change shooting functions such as the mode, flash options, self-timer, ISO, white-balance, drive modes, resolution and exposure compensation. These will change depending on the shoot mode you select. If you choose Magic (Magic Filters – digital effects), you'll see a small number in a circle. This is to select the type of effect you want to use. You can choose from Pop Art, Pin Hole, Fish Eye, Drawing, Soft Focus, Punk, Sparkle, Watercolour, Reflection and Miniature.

The Main menu is more involved and makes more definite changes such as a full reset of functions, formatting the card, backing up images, Eye-Fi settings, Pixel mapping, NTSC/PAL and Power save. There's seven pages of menus so it would be exhausting to go through them all. The menu is certainly easy to use though and despite the vast amount of features and options in there, it's surprisingly clear to understand.

From a cold start (camera switched off), we managed to get a picture focused and taken in just over 2.5sec. This is perfectly acceptable, there's not a lot of cameras that will go faster than that. Although they are around. The VH-410 has three continuous shooting modes. The standard version will take photos continuously while you hold down the button. This is slower than the others but is also at full resolution and file sizing.  In this mode, we managed to get seven pictures in a ten second period. This equates to 0.7fps (frames per second). It took a further four seconds to download the remaining data.

There are two burst modes. Hi1 will switch the Olympus VH-410 to a low 3 megapixel resolution in order to increase speed. If speed is more important than image quality then this is the one to use. It took 18 images in the same ten second period which is around 1.8fps. It also downloaded the information and was ready to shoot three seconds later. Hi2 also took 18 images and at first we thought it was a bit of a faux pas putting the same feature in twice. Then we rechecked the times on the stopwatch we used. The 18 images had all been taken in one second. The reason we got a little confused was because it froze the screen while it downloaded and wouldn't reset until we'd removed our finger from the shutter release.

Press the blue arrow on the back of the Olympus VH-410 and the screen will start to display all the pictures you've already taken. You can scroll through these using the ring on the back of the camera. The images you're looking at can be made smaller to see more on the screen by toggling the zoom rocker on the top of the camera. Alternatively you can also zoom into a picture to see if it's focused correctly. Playback doesn't have its own menu system like other cameras, but it does have a section within the main menu. In here you can create a slide-show, edit pictures, erase them, designate them for printing, lock them and designate them for uploading through Eye-Fi.

In the box, there's the Olympus VH-410, lithium ion battery, wrist strap, charger and USB cable. The booklet is simply a start up guide. The full manual is situated on the CD that comes in the box. There's also an editing suite called Olympus Viewer 2 on the same CD.