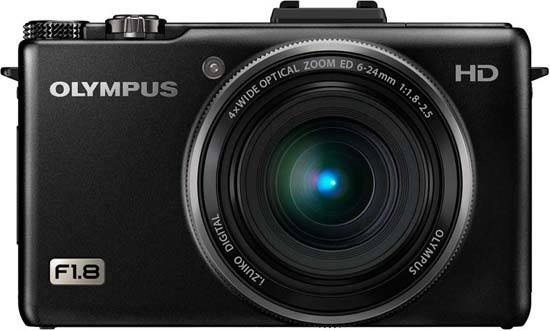 The Olympus XZ-1 produced images of remarkable quality during the review period. JPEGs taken at base sensitivity exhibit great colour and nice tonality, and strike a good balance between noise reduction and detail retention. Dynamic range feels a bit limited in the out-of-camera JPEGs, but the raw files provide some highlight headroom. High-ISO performance is broadly in line with what you could reasonably expect from a sensor of this size. In JPEGs, the effects of noise reduction become very apparent at ISO 400 and above, whilst the raw files contain quite a lot of noise (though they do retain detail better than the out-of-camera JPEGs). ISO 800 and 1600 are borderline usable for small prints, whereas the highest settings of ISO 3200 and 6400 are really only there to beef up the spec sheet. Thankfully with an f/1.8-2.5 lens and sensor-shift image stabilisation on board, you will hardly ever need to shoot at these high sensitivity settings anyway. The fast lens not only allows you to use low ISOs in dim lighting, it also provides for good subject-background separation, something most digital compacts can't really achieve. Overall, a very strong performance for its class.

The base sensitivity setting is ISO 100, with the maximum being ISO 6400. You can dial in any value in between these two extremes in third-stop increments. Here are some 100% crops which show the noise levels for each “full” ISO setting. The raw files were developed with Nama5 v1.13 Demo, one of only a couple of external raw converters that supported the Olympus XZ-1 at the time of writing.

The 4x i.Zuiko lens offers a versatile focal range, as demonstrated by these examples.

At full resolution, the Olympus XZ-1 allows you to choose from two JPG quality settings, Normal and Fine. Additionally, the camera supports raw capture, and simultaneous recording of JPEG and raw files is also possible.

The Olympus XZ-1 handled chromatic aberrations well during the review, with limited purple fringing present around the edges of objects in certain high-contrast situations, as shown in the examples below.

The Olympus XZ-1 has both a Macro and a Supermacro mode, albeit the zoom can only be used in the former. The shot below demonstrates how close you can get to the subject, in this case, a Compact Flash card. We have included a 100% crop from the centre of the frame to show you what the sharpness is like.

The Olympus XZ-1 has a neat little pop-up flash that can be raised manually, by way of the sliding switch sitting in the top left corner of the camera's back plate. Apart from providing a bit of fill light for backlit subjects, this flash can also trigger up to three groups of wirelessly slaved FL-36R flashguns, which offer TTL flash exposure metering with the XZ-1. Note that because of the placement of the pop-up flash, extra care must be taken to prevent a finger from blocking the flash, particularly when holding the camera in portrait orientation. These shots of a white-coloured ceiling were taken at a distance of 1.5m.

The Olympus XZ-1 allows you to dial in exposure times as long as 60 seconds, and has a Bulb mode for exposures lasting as long as 16 minutes, which is very good news if you are seriously interested in night photography. Getting the optional RM-UC1 remote cable is a good idea if you plan on using the Bulb mode on a regular basis. The example below was taken at a shutter speed of 8 seconds, aperture of f/5.6 at ISO 100. We have included a 100% crop to show you what the quality is like.

The Olympus XZ-1 has a sensor-shift image stabilisation mechanism, which allows you to take sharp photos at shutter speeds that are critically slow for the focal length used. To test this, I took 2 hand-held shots of the same subject at the long end of the zoom range, with the same settings (shutter speed of 1/15th of a second at ISO 200). The first shot was taken with image stabilisation turned off, the second with it turned on. Here are some 100% crops of the images to show the results. As you can see, this feature really does seem to make a difference and could mean capturing a successful, sharp shot or missing the opportunity altogether.

The Olympus XZ-1 offers half a dozen Art Filters including Pop Art, Soft Focus, Grainy Film, Pinhole, Diorama and Dramatic Tone. These can be applied to both stills and movie clips.