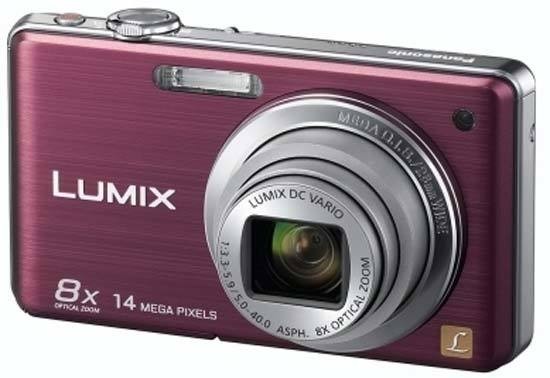 Promising high-grade features from a user-friendly package, from the outset the 14 megapixel Panasonic Lumix DMC-FS33's makes a reasonable fist of delivering on such PR-speak. Also reasonable is the cost, at a very affordable manufacturer's suggested price of £199 in the UK.

There's no HDMI port though, just standard AV/USB connectivity with a joint port hiding under a small flap at the camera's side. With a 40MB internal capacity, compatibility is offered with SD, SDHC and newer high capacity SDXC cards, so memory is as expandable as you'd want.

The usual mix of metal and plastic construction, yet with attractive brushed metal faceplate disguising the latter element, the FS33's solid feel convinces when gripped in the palm. The thumb rests on a small square of raised nodules providing some 'grip' at the back, leaving the forefinger free to hover over the shutter button on the top plate, encircled by a zoom lever. The Lumix weighs a manageable 162g, and with overall dimensions of 11x56.5x27.2mm, slips just as easily and unobtrusively into trouser pocket as it does jacket or, presumably, handbag. For those who are swayed by such things, the Lumix is available with silver, red or more sophisticated black faceplate we had in for review.

The brushed metal faceplate of the camera, as mentioned, resembles so many of its predecessors and indeed competitors, dominated by internally stacked lens mostly hidden within the body when not in use, supported when extended by Mega Optical Image Stabilisation to help combat the effects of camera shake. This degree of conventionalism is continued in the porthole-shaped window housing AF assist and self timer lamp top right of the lens, and narrow lozenge shaped built-in flash top left. When holding the camera this is set just close enough to the lens - and away from the sides - to avoid fingers accidentally obscuring it, a common problem with pocket models.

The top plate features a dedicated intelligent Auto (iA) button for point and shoot simplicity - the FS33 comparing scene and subjects with on-board parameters and selecting the most appropriate - along with the expected on/off power switch, holes for both built in microphone and speaker, plus, the largest control of all, the shutter release button; this is handily encircled by a lever for operating the zoom. The Lumix takes two seconds to power up and a further three to commit a maximum resolution still image to memory, both of which are average timings for this class of camera.

The FS33's zoom power, supported by its manufacturer's 'Mega' optical image stabilisation, can also be boosted, here to an equivalent 16.9x courtesy of Panasonic's Extra Optical Zoom function. Since this utilises only a central portion of the CCD rather than its entirety, capture resolution plummets to three megapixels (the incremental alternatives are 9.5x at 10 megapixels or 13.5x at 5MP). Otherwise the zoom lens glides through its basic optical range in all of three seconds. Annoyingly perhaps, it's disabled when shooting video and merely stays impotently at the point it was when recording commenced.

Although mostly offering 'hands off' point and shoot convenience, the FS33's auto AF point can usefully also be adjusted simply by tapping the screen with a fingernail, should the user wish to bias focus on a subject other than that which is dead centre of frame. Macro close ups are down to 5cm from your subject.

General operation response times are quick - virtual controls responding instantly to a finger tap - with Panasonic claiming the official time it takes for 'sonic speed' auto focus to lock crisply onto target is 0.35 seconds, courtesy in part of its Venus Engine IV processor.

Like its forebears the FS33 doesn't rely on touch screen alone for operation however; the keys to its right on the backplate also have to be pressed and prodded before anything will occur. This bet-hedging mix of physical buttons and virtual ones thus requires a period of familiarization. The mode button located here at the top of a vertical row of four controls in the absence of a dedicated dial, virtual or otherwise, summons up a quartet of icons on screen - for 'normal' picture (full auto) mode, 24-option Scene mode, My Scene mode (more of the same, but the camera saves your previous choice enabling a quick return to it), plus - of course - motion picture/movie mode. As mentioned that's a maximum 1280x720 pixels at 30fps, WVGA 848x480 pixels, or standard VGA 640x480 pixels selectable.

As a further time saver a press of the 'Q.Menu' (Quick Menu) button bottom right of the backplate brings up a toolbar of key shooting options on screen to save otherwise having to dip into more comprehensive menus to adjust the likes of resolution, white balance or ISO. Here manually light sensitivity settings range from ISO80 up to ISO1600, with a boosted ISO6400 option accessible if shooting in High Sensitivity scene mode, though the camera itself decides when it will stretch this high.

Wedged in between mode and Q,menu buttons are self explanatory buttons for display and menu. With subsequent presses of 'display' on-screen information is turned off to display a clean, uncluttered image, and/or a nine zone compositional grid is overlaid for those wishing to practice their photographic 'rule of thirds'. If pressed in playback mode instead, on-screen info is merely turned on or off to display a clean image to the viewer. Again this is pretty much what we'd expect from a camera around the £200 mark.

A press of 'menu' button in capture mode meanwhile and basic shooting options (four screens of just three choices each) are presented to the viewer in larger-than-average type, each one set into a panel that extends almost the width of the screen, the size and dimensions therefore making it easier to select with a finger tap. At the bottom left of the screen are recognizable camera and spanner icons for variously selecting capture or set up modes, with, in the middle bottom of screen, forward and back buttons which the user can utilise to scroll back and forward through the available choices. Over to the right hand side is a large-ish button marked 'exit' so the user can quickly return to using the LCD for shot composition.

Another press of the menu button, this time in playback/review mode, and users are given the ability to crop and re-size images in-camera should they wish to do so, as well as choose favourites and earmark specific shots for printing. The final button on the camera back is a sliding switch for alternating between capture and review modes; though this keeps things simple we're not great fans of the switch as it means the user has an extra task to perform should a photo opportunity suddenly present itself whilst shots are being reviewed. Unlike on other models that offer a dedicated button for playback, users of the FS33 cannot lightly press the shutter release button to 'jump' back into shooting mode - said switch has to be flipped first, losing potentially valuable seconds.

Admittedly this is nit picking as in almost every other regard operation is fluid and the FS33 is a capable performer. With a lug for attaching a wrist strap at the right hand side of the camera - if viewed from the back - the opposite side is devoid of any distinguishing details whatsoever.

The base of the unit meanwhile features a screw thread for attaching a tripod over to the lens side, but not directly beneath, and at the opposite side a protected slot for a media card - here SD, SDHC or even higher capacity SDXC - plus battery. Battery life is good for 300 images from a full charge, which is respectable for its class.

But, as ever, the proof is in the images the FS33 delivers. The manufacturer is known for a reliable and consistent performance, so we potentially have high hopes for the FS33. And yet, in cramming 14 megapixels onto its sensor has Panasonic over egged the pudding? Read out to discover our verdict…