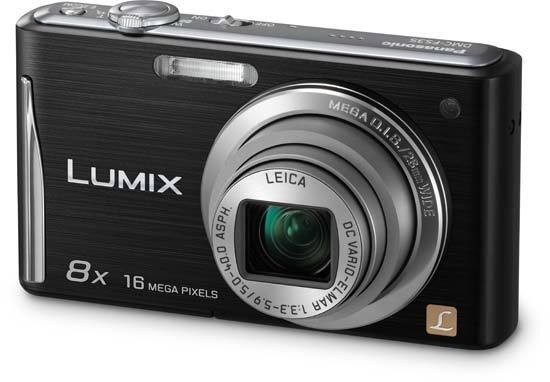 We were lucky enough to be testing the Panasonic Lumix DMC-FS37 under ideal conditions: with deep blue skies top of frame and lush late spring vegetation carpeting the foreground beneath. Faced with such primary colours the Panasonic turns on the charm; the vivid option selectable from the colour mode menu lifting any digital flatness and providing some added punch, to deliver results that we largely feel require no further post processing out of the camera. Which is, on the face of it, all anyone wants from an inexpensive pocket snapshot.

At both maximum 28mm (35mm equivalent) wideangle and extreme 224mm equivalent telephoto settings we achieved some detail rich and colour rich results, with the only 'issues' being familiar ones that blight 99% of compact cameras: namely visible pixel fringing tracing the contours of objects - chiefly tree branches - where light meets dark - plus burnt out highlight detail.

In terms of low/er light shooting, noise starts creeping into shadow areas as low/high as ISO 400, though up to and including ISO 800 we can live with it. At ISO 1600 however we're getting both a grainy wash across the entire image and also softening of edge detail. This top manually selectable setting would however be usable at a push - for example if it made the difference between getting the shot, or not. A better bet may however be purely to choose the night scenery scene mode and deploy the self timer with the aid of a steady surface, which as our sample shots show produces a much cleaner overall result than simply bumping up the ISO.

There are 5 ISO settings available on the Panasonic Lumix DMC-FS37. Here are some 100% crops which show the noise levels for each ISO setting.

The Panasonic Lumix DMC-FS37 handled chromatic aberrations well during the review, with some purple fringing present around the edges of objects in high-contrast situations, as shown in the examples below.

The Panasonic Lumix DMC-FS37 offers a Macro setting that allows you to focus on a subject that is 5cms away from the camera when the lens is set to wide-angle. The first image shows how close you can get to the subject (in this case a compact flash card). The second image is a 100% crop.

The Panasonic Lumix DMC-FS37's maximum shutter speed is 60 seconds in the Starry Sky mode, which is great news if you're seriously interested in night photography. The shot below was taken using a shutter speed of 6 seconds at ISO 100. The camera takes the same amount of time again to apply noise reduction, so for example at the 15 second setting the actual exposure takes 30 seconds.