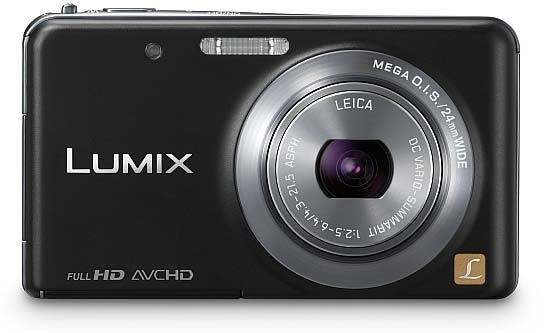 The Panasonic Lumix DMC-FX80 is a touch-screen digital compact camera with a 12 megapixel sensor, Full 1080p HD video and a 3D photo mode. Coupled with a bright f/2.5 Leica lens which starts at a wide angle 24mm, this seems like a camera for the tech savvy, while the clean lines and slick finish indicate a camera for the younger generation. The Panasonic Lumix DMC-FX80 can definitely walk the walk and in this test we see if it can talk the talk. Available in any colour as long as it's black and costs around £230.

If we were to judge a book by its cover then the Panasonic Lumix FX80 should be a thrilling read. The super smart exterior is simple and clean. A slight bulge at the front signifies the 5x optical zoom barrel of the Leica f/2.5 DC lens. A small, slim flash and AF emitter accompanies the lens on the front.

Move to the top of the camera and there's not much else to look at. The body sweeps over in an arc with the small power button and oval shutter release button sitting flush with the metal plate that lines the top of the camera. A small rocking switch for operating the zoom is all that sticks out. The back only has two buttons for direct video recording and playback. The large 3 inch screen does all the heavy work at this point being a touch-screen.

Switching the Panasonic Lumix DMC-FX80 on is nothing too fast. The camera seems to do it at a pace that suits it. When the screen bursts into life it's awash with icons, letters and numbers. In fact at first it looks a little cluttered. Newcomers to photography could be put off by the amount of information facing them for the first time. Still, it only takes a few moments to get used to the information available to you. Being a touch-screen, the body of the camera is bereft of buttons and instead they're located on the main screen which is the main reason for all the information.

In the top left corner of the screen is a small icon which represents the photo mode that you're in such as intelligent auto, auto, creative control, scene modes, 3D photo and cosmetic mode. If you've been living under a rock for the past few years, intelligent auto is a feature pioneered by Panasonic and has since been plagiarised by every other manufacturer. It works by analysing the screen and deciding the best mode to put the camera in from there. For example, if it sees a face it switches on face detection, readies the flash and puts the camera in portrait mode. For close up subjects, it puts the camera into macro mode and so on.

Creative Control is Panasonic's name for the digital effects. The name is dubious because although the picture looks different, you're not doing anything creative. The camera is putting all the effects on it for you. On the other hand, you could argue that you have to use creativity in choosing the effect in the first place. The effects are pretty cool though. There's Expressive, Retro, High key, Low key, Sepia, Mono (black & white), high dynamic range, toy camera, miniature and soft focus. The good news about the Creative Control menu is that it splits the scene modes down a bit. At one point the Scene menu was teeming with options but now there's a more modest 15 to choose from.

If you're 3D enabled, the Panasonic Lumix DMC-FX80 has a 3D mode for shooting and viewing pictures in this fascinating new media. It works by taking a photograph, moving the camera slightly to the right and taking another picture. The camera then merges the two slightly misaligned in order to make a 3D image.

Finally, the photo mode menu holds the Cosmetic Mode. In recent times, portraits and self-portraits have become increasingly popular due to social networking. Profiles are awash with self portraits but they're not always flattering. Panasonic have decided to help out a little and add the Cosmetic Mode to the shooting options. You can choose the skin tone and the camera does the rest. We didn't see much of a difference in our tests self-portraits – which we put down to our flawless skin. However, for more of a boost, flicking into the playback mode will open up the options for you.

When viewing pictures you've already taken, there's a tab on the right with a person and a brush. Tapping this will open up loads of options for retouching the pictures. For portraits, use the Beauty Retouch, for everyday shots such as flowers or days out, the Artistic Retouch will be more beneficial because it holds three more options: Defocus effect, Creative retouch and Colour/brightness. The first option allows to to select an area to remain sharp while the rest of the image is blurred out. Similar to a sweet spot created by a Lensbaby. Creative retouch offers the digital filters found in the mode menu. Finally, Colour/brightness is pretty self-explanatory.

Auto retouch is good for if you're unsure or simply can't be bothered going through the options. The Panasonic Lumix DMC-FX80 will work out the best retouching options to use and apply them. It then shows you the picture with a handy on/off option to see a before and after. If you like it, press ok and it saves an extra copy without destroying the original. This type of saving is called non-destructive because the original is intact. There's also a stamp effect for if you like placing silly cartoon icons on your pictures. This would be good for younger users who like to decorate their profile pictures on social network sites.

The Panasonic Lumix DMC-FX80's main menu offers three tabs for recording, motion picture and set up. The recording menu offers many similar features to what is normally found in the Panasonic Q.Menu with the exception that the FX80 lacks such a menu. So if you want to change the resolution, picture size, minimum shutter speed or continuous shooting mode, it's done in here. Motion picture (video menu) allows you to change the recording mode, quality, AF mode and wind cut. The first two only opening up when there's a card inserted. Because of this rearrangement, current Panasonic users not used to the touch-screen type camera won't be used to it and could find it difficulty at first. As with anything, eventually, you'll get used to it.

The Panasonic Lumix DMC-FX80 focuses on the position of the white target square on the touch-screen. It's default setting is the centre of the screen but if you enable touch focus, you can place it anywhere in the screen. This makes it useful for off-centre subjects.

The Panasonic Lumix DMC-FX80 is built to a good standard. The metal body feels solid and a little weighty. The lens has the world renowned Leica badge emblazoned across the top although it's manufactured by Panasonic to Leica specification. The f/2.5 wide aperture will increase the amount of light hitting the sensor making it better in low light without needing flash. There's little play in the lens (we only worry if it moves substantially). The battery door on the bottom is made of plastic and although it has a metal strip on it for reinforcing, it's still bendy. The HDMI and USB ports have a good quality door fitted. Although that's what we first thought. It's actually some simple plastic on a plastic hinge. The most obvious sign of the camera's status is the tripod bush. It's plastic which makes the camera a lower end camera in terms of the Panasonic range.

Our sample images on the shutter lag timer gave a response of 0.08sec which is pretty normal by all accounts. However, we also got a ghost image of the arm at 0.05sec which is certainly faster than a typical digital compact camera. Although we decided that the camera is simply using a slower shutter speed, it displays that while the majority of the exposure was done at 0.08, the camera starts recording at 0.05.

There are three continuous modes; On, High speed burst and flash burst. The first option is quite simple. The pictures are taken continuously while the shutter is depressed. That is while there's space in the buffer of course. Once that's full, it has to stop to download onto the memory card. High speed burst takes a small succession of high speed pictures which will allow you to then pick out the best. Good for portraits of someone smiling or motorsports. Flash burst is similar to the High speed burst but uses a strobe flash to add extra light in a dark situation. Don't start to think that because the mode is called high speed that you're going to get pictures rattling off at ridiculous velocities. It plods along taking pictures at a regular interval.

From a standing start to taking a picture, the Panasonic Lumix DMC-FX80 is nice and fast. In fact, we managed to get a picture taken in half a second. We even tried that more than once to check it wasn't a fluke. From starting the camera to focusing and taking a picture takes around 2 seconds which is pretty standard.

In the box, the Panasonic Lumix DMC-FX80 comes with the cables to connect the camera to your computer, a wrist strap, rechargeable lithium ion battery and CD software with the full manual on it as well.