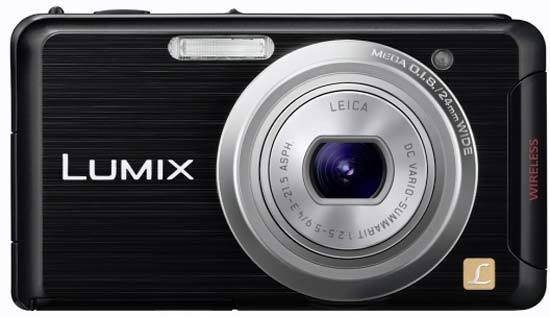 The Panasonic Lumix DMC-FX90 is a small digital compact camera designed to appeal to the tech-savvy. Bursting with features such as wi-fi, touch-screen LCD, a Leica lens, Mega Optical Image STabilisation and SDXC card compatibility, the FX90 also boasts a 12.1 megapixel hi-speed CCD sensor, a 5x optical zoom, Full HD recording in AVCHD format and a 24mm wide-angle lens. With so much happening on the FX90, it's sure to be the talking point of many nights out. The Panasonic Lumix DMC-FX90 retails for £269.99 / $299.99.

The fetching face of the Panasonic Lumix DMC-FX90 hides behind it a barrage of features just bursting to be seen. However, a few notable features can be found on the bevelled edge front. Take, for example the lens. It's a Leica DC Vario-Summarit which, although not made by Leica, is a very good lens. The bright f/2.5 aperture will certainly help in low light to reduce noise by allowing faster shutter speeds. Assisiting it is the Mega OIS (Optical Image Stabiliser) which has a compensation of around 3 stops.

Moving onto the top of the Panasonic Lumix DMC-FX90's body, there's a few more buttons than is generally found on the top plate of compacts these days. On the FX90, you can switch the camera on or off, record video directly, take a picture and zoom in and out.

With all these features, it makes you wonder what buttons are actually on the back. Well, there's just the one to enable the wi-fi. If you've been living under a rock and don't know what wi-fi is, it's a method for wirelessly sending information from one device to another. Using the FX90's wi-fi feature will automatically upload pictures to a website of your choice of Facebook, Flickr or Picasa while video will be uploaded to YouTube.

The rest of the Panasonic Lumix DMC-FX90 is taken up with the huge 3 inch LCD touch-screen. Being brutally honest, this isn't the brightest or sharpest screen we've seen. It's adequate for the job it needs to do but is that enough? It's also not overly sensitive. This can be subjective but we're used to smart phones and how sensitive they are.

Just like the top plate, the LCD screen is awash with features and options. Down the left side there's a self-timer button, menu and display buttons while on the right, you'll find the modes, playback and zoom buttons. The screen is pressure sensitive and comes with a small touch pen in the box. It makes choosing the small buttons on the screen a lot easier to do. However, we still found ourselves having to double tap the screen to confirm commands.

The main menu opens up three tabs for recording options, video and set-up. Recording allows you to change features such as the flash, self-timer, resolution, ISO or white-balance among others. There's also the desktop set-up which allows you to place your two most used options on the screen of the camera saving precious time drilling down into the menus. We chose ISO and self-timer for the purposes of the test. It's done by pressing the button labelled with a spanner and a letter M. You can then drag your favourite icon over to the left side and fill the gaps or overwrite any that are already there.

The video tab allows you to change the recording format from AVCHD to MP4. The button labelled FSH isn't a list of the Full Service History. It adjusts the recording resolution of the video in the camera. When in Full HD, you can choose between FSH or SH and in MP4 there's the choice of FHD, HD or VGA.

While the Panasonic Lumix DMC-FX90 isn't an exceptional build quality, which we kind of expected, but that's only due to the sheer amount of features. It has to be remembered that the camera costs just over £200 so compromises have to made somewhere. However, amidst the thin metal casing that feels like it'll buckle if pressed too hard and the flimsy battery cover there are inklings of light such as the metal tripod bush and previously mentioned Leica lens.

As we mentioned before all the Panasonic Lumix DMC-FX90's menus are found on the screen and need to be navigated by using the pen that's included in the box. We discovered that trying to get by without the pen is difficult and the screen isn't responsive at the best of times.

The FX90 has a touch-focus option which is located in the bottom right of the screen. When it's switched on, the camera will focus and automatically shoot. Next to this is an on-screen zoom which brings up a virtual zoom button so you don't have to exert yourself by extending your finger to the top of the camera.

The wifi system is pretty cool and no matter how many times we see this sort of stuff happening, it's always great to take a picture, link to your computer and watch it pop up on the screen a few moments later. We had to connect and input the security code which only takes a few moments by choosing the wifi option in the playback menu. Actually connecting and downloading a full size image takes a lot longer – in fact we were waiting for several minutes just for one picture before it finally told us to reconnect to the wifi choosing the FX90 channel. On our phone, it asked for a password which the camera didn't supply so the transfer failed. We tried linking it to the computer and once again we were asked for the security key.

In the box, you get the Panasonic Lumix DMC-FX90, a battery and charger as well as a touch-screen pen. The enclosed CD contains the full operating instructions as well as image software PHOTOfunSTUDIO 6.4 HD Lite Edition with wi-fi. There's also a shortcut to an online trial version of Super LoiLoScope. Both programs are for Windows only.