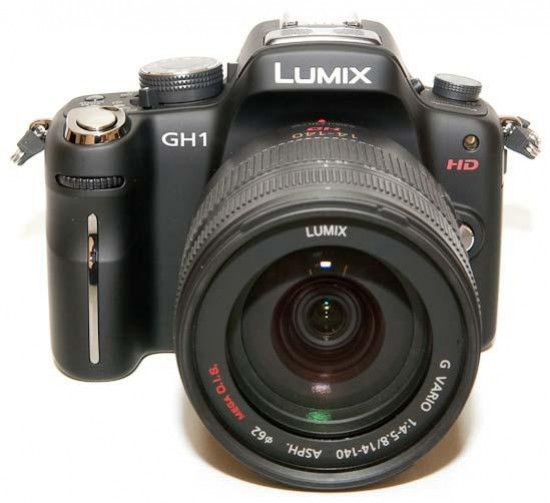 The Panasonic Lumix DMC-GH1 is the best attempt yet at implementing video recording on a DSLR-like camera. The combination of high price, compulsory kit lens and so-so image quality in low-light conditions won't make it suitable for everyone though.

If you're looking for high-definition video in a DSLR format, then the Panasonic GH1 is easily your best choice. The ability to continuously auto-focus during recording simply isn't offered by the likes of the Canon EOS 500D or Nikon D5000, which force the user to manually focus. Although the GH1 is sometimes a little slow to re-focus, having this functionality makes the world of difference, ensuring that the main subject is amlost always sharp. In addition, the GH1 also allows you to change the aperture and shutter speed during recording as well as before, something that only the much more expensive Canon EOS 5D Mark II can do (with its recent firmware upgrade). Again there's a caveat, as you can clearly hear the click of the GH1's mode dial in the movie, but you can always edit this out later if you have the software and know-how. Sound is otherwise a real high-point of the Panasonic Lumix DMC-GH1 's movies, with the built-in stereo mic and wind cut function helping to create a much better soundtrack than virtually any other digital camera.

In terms of still image quality, the Panasonic GH1 also gets most things right. Colours are accurate when using the default Standard setting, with lots of scope to adjust the JPEG output to suit your own tastes, and the auto white balance is spot-on in most lighting conditions. The pop-up flash is fine for use as fill-in, the ability to make bulb exposures up to 4 minutes long will please night photographers, and anti-shake via the supplied lens helps to keep things sharp in low-light. The new 14-140mm kit lens exhibits commendably few signs of distortion at either end of the focal range, although images were noticeably soft at the default settings. The notable downsides are the traditional bug-bear of Four Thirds sensors, namely noise at slow ISO speeds (it's clearly visible at ISO 400), plus the comparatively poor macro performance if you're used to the 1cm focusing capability of many compact cameras. Ultimately the DMC-GH1 can't rival a DSLR camera with an APS-C sized sensor in low-light, but otherwise it delivers very good image quality that most of its target audience will love.

As it's so clearly based on the older G1 model, the GH1 offers almost all of the same handling benefits. Users looking to move-up from a point-and-shoot compact should definitely consider the G1. It delivers a near-seamless Live View experience which doesn't feel as though it has been literally forced into the overall design, as with the Live View function on the majority of DSLRs. The combination of the high-resolution, swivelling LCD screen and the outstanding electronic viewfinder is a joy to use, and in many ways actually surpasses what a comparable SLR camera can offer. Despite its technological advances, the EVF can't quite rival a good optical viewfinder, as it has a noticeable flicker and becomes grainy in low-light, but it is preferable to the small, dim viewfinder of many entry-level DSLR. The DMC-G1 isn't as small as you may have hoped from looking at the glossy marketing shots, but it subsequently handles really well, even for someone with large hands. There's really very little to complain about in terms of the G1's design, feature set and ease-of-use. It delivers all the convenience of a compact camera shooting experience in a DSLR-like package that is smaller and more portable than most DSLRs.

As with the G1, however, the single biggest problem with the GH1 is its price-tag. A recommended price at launch of $1499.95 / £1299.99 with the 14-140mm kit lens is simply too high for a camera targeted at customers used to spending far less on a compact. It also doesn't compare well to a more traditional DSLR, with that kind of money easily buying you a Canon EOS 50D, Nikon D90, Sony A700 or Olympus E-30, all with kit lenses. Unfortunately for the GH1, virtually all of those cameras also offer better image quality, so if that's the most important factor for you, there are plenty of options available for the same or even less cash. On the other hand, the all-in-one nature of the GH1 package will undoubtedly appeal to many people. As long as you don't mind the relatively slow maximum apertures of the 14-140mm kit lens, you could buy the GH1 and never have to purchase another lens. Ultimately we'd like to see the GH1 offered as body-only so that at least the consumer has the choice.

In summary, the Panasonic Lumix DMC-GH1 offers a fantastically well-implemented Live View experience in a small and portable DSLR-like format with the addition of an intuitive video mode that mere mortals, and not just experienced videographers, can produce great results with. If you don't need the video capabilities, though, the much cheaper DMC-G1 camera is by far the more logical choice.