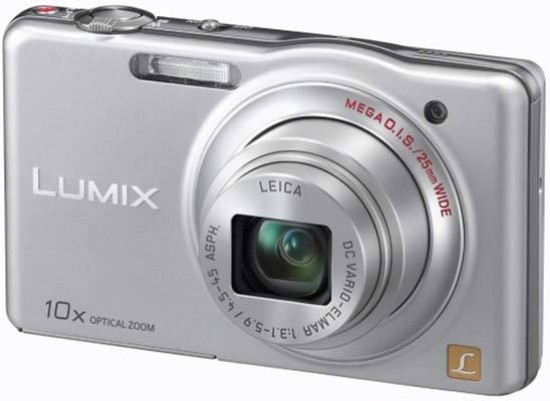 Gone are the days when a 10x optical zoom had to be a large, brick shaped affair with a slow, lumbering operation.  Thanks to cameras such as the Lumix DMC-SZ1 from Panasonic, getting a huge zoom can still mean slipping the camera in your pocket.

In this futuristic world we live in, many of the digital compacts from Panasonic and other manufacturers are touch-screen but the SZ1 has funny bumpy things called buttons. Call us old fashioned but there's nothing wrong with buttons on a camera. In fact there's been many comments on new cameras with touch-screens saying that they simply don't have enough buttons.

The lens on the front of the Panasonic Lumix DMC-SZ1 is Leica designed and starts at a relatively wide 25mm zooming out to a perfectly respectable maximum telephoto of 250mm (in 35mm terms). Image stabilisation is Panasonic's noted Mega OIS. We say noted because it's been present on their digital compacts since they started making them. A few years ago, they introduced Power OIS which gives a better performance but that's generally reserved for the top end cameras. With a high zoom, it would've been handy on the SZ1 though.

On the back, a large 3inch LCD screen uses up the left two thirds of the available space leaving a slim area on the right to fit all the buttons into. Mind you, Panasonic have managed it. A small switch on the far right flits between shooting and playback. A small mode button selects the shooting mode you'd like to choose.

There are four selections: Intelligent Auto, Auto, Miniature and Scenes. A lot of digital compact cameras are coming out with interesting digital effects and filters at the moment. The Miniature effect is one such filter. It blurs the top and bottom of the screen leaving a thin band of focus across the middle. Used at a high vantage point to a lower scene featuring life such as cars and people, it gives them the appearance of being models.

At the bottom, the Q.Menu allows quick access to your most used features. In this menu, you can change the resolution, ISO, white-balance, AF modes, continuous shooting and power LCD. The latter compensates for bright sunshine or high angle shooting. They're very effective as we found in the brilliant sunshine we got throughout our test. For more in-depth features, the button located in the centre of the navigation pad opens up the main menu. Here you can change camera features, video features and the core set up of the camera such as the language or date/time. You can also completely reset the camera or format your card, so be careful!

The Panasonic Lumix DMC-SZ1's interface is clean and straightforward to use. It's changed slightly from earlier cameras from a couple of years ago so if you're in the market to replace your existing camera, this could take some getting used to. However, with all things new practice makes perfect and it'll get easier in a short time. Panasonic have split the main menu into three parts for shooting, video recording and the basic set up. In fact, this will have been present on older cameras just laid out less obviously. It does make it easier to navigate. No-one wants to be scrolling through pages of options just to find out how to change the file format of a video.

The quality of build with the Panasonic Lumix DMC-SZ1 is actually pretty high. The metal body has a silver ring around the centre dividing the front and back. The battery compartment also houses the memory card. The SZ1 can accept SD cards up to and including SDXC. The battery bay door has a lock to keep it in place. A tell tale sign of the positioning of the camera – apart from the price – is the tripod bush. Higher end cameras are metal with lower end cameras using a plastic one. The SZ1 tripod bush is plastic. It's ok for occasional use but can't cope with prolonged heavy duty use.

Start up time from the camera being switched off to taking a picture is around 2.5 seconds. We managed to get around 13 pictures in a ten second period which works out at about 1.3fps.

Flicking the Panasonic Lumix DMC-SZ1 into playback, the pictures shown are defaulted full screen and can be adjusted to thumbnails by zooming out. Pressing the display button will scroll through varying amounts of information on the screen. In the menu, you can mark pictures to upload to the internet, resize, crop, copy and protect.

The box contents are the usual suspects of accessories: A wrist strap, battery, USB cable, charging adapter plug, video cable and CD with the full manual and editing software.

So the Panasonic Lumix DMC-SZ1 is pretty basic. It has everything you need to keep you taking pictures – which is important – but we can't help but be a little disappointed at the lack of digital effects. Especially considering that they're so popular at the moment with the type of person that the camera is aimed at. With apps such as instagram and Streamzoo allowing phones to apply these filters and upload to the net, we expected to see a lot more to coerce customers back to holding a camera.

Saying that there are that select few consumers who don't want to get bogged down with filters and effects. That's who this camera is perfect for. The small size is useful for travellers. The zoom will be great for capturing the world while the Leica quality lens should ensure sharp pictures. Couple that with the in built charger, internet uploader  and SDXC compatibility for huge memory cards and the whole package is all you need.