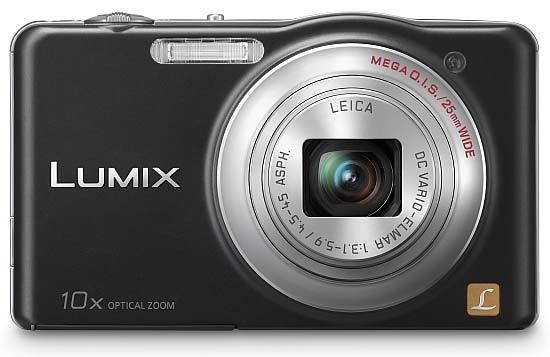 The Panasonic Lumix DMC-SZ7 is a smart, snazzy digital compact camera with a 14.1 megapixel MOS sensor, Leica DC Vario-Elmar lens which sports a 10x optical zoom (25-250mm in 35mm terms) and a bright 3 inch LCD screen. One of the main features of the camera is that it records in FullHD (1920x1080) incorporating the AVCHD format. Another is the 10fps continuous shooting at full resolution. Priced at £219.99, the Panasonic Lumix DMC-SZ7 is available in white, black or brown.

When it comes to camera design, Panasonic have got it pretty much nailed. It's like they can't make an ugly camera - and that kind of makes our life difficult. You see, because the cameras are so nice looking, we tend to fawn over them when they arrive in the office. Then when we're writing the reviews, we have to remain unbiased while not actually finding anything wrong with how it looks. The same can be said for the Panasonic Lumix DMC-SZ7. It's a simple box with an enlarged lens barrel that makes the top of the camera bow out slightly. This is to incorporate the large 10x optical zoom in a small body. Panasonic have exploited this and placed the stereo microphone on the bulge.

The Panasonic Lumix DMC-SZ7's lens is a Leica DC Vario-Elmar consisting of 9 elements in 7 groups. Four of the elements are aspherical and six have aspherical surfaces. We assume that the six include the previous four.  The lens is stabilised by Panasonic's Mega OIS. We'd prefer to see Power OIS for an extra stop compensation but maybe that would push the price up?

One other thing we like about Panasonic cameras is that they have switches. We like switches because they're definite. They're a visual confirmation that the action you've performed has been completed. The camera has a power switch over a power button and it's great to see it. The shutter button would be no good as a switch so we're happy to see the faithful design of a round button remain. Operating the 10x optical zoom is performed by using the rocker wrapped around the shutter release. Located on the right shoulder is the dedicated video record button.

On the back is a switch to flick between playback and shooting. You can put the Panasonic Lumix DMC-SZ7 in playback while switched off, flick the power switch and look at the pictures you've taken without the lens popping out and getting in the way. Not a lot of people know that by holding down the playback button, a lot of cameras will start up in a similar fashion.

The rest of the layout is standard Panasonic with a mode button at the top of a navigation pad that also doubles up and a Q. Menu at the bottom with a Display options button. Modes simply scrolls through the different shooting types that are available such as Intelligent Auto, Auto, Scenes, 3D and Miniature mode.

In Q. Menu, the camera opens up the most used features of the camera such as resolution, ISO, white-balance, AF modes, continuous shooting and screen brightness. This sub-menu is less cluttered than the full menu which is accessed by pressing the centre of the navigation pad. Pressing that button brings up a white screen with three options for recording menu, video menu or set-up. In playback, the set-up remains while the previous other two are replaced with a playback menu. It's still possible to change all the options from the Q.Menu if you decide that using the more comprehensive menu is your thing.

The Panasonic Lumix DMC-SZ7 is a metal construction and is made to a reasonable standard. Essentially, it's made to the price tag; the screen is bright and flush to the camera and it has a lithium ion battery. The battery compartment door could be more sturdy but again, cost would be a deciding factor. For your £220 you get a good quality lens from one of the best lens makers in the world today and SDXC memory card compatibility. The buttons are a bit small so it wouldn't be a suitable camera for anyone with large hands. WE often pressed multiple buttons because they're quite close together. Especially the ones on the navigation pad. However, this is the price you pay for a smaller camera.

Panasonic menus have always been easy to navigate and the SZ7 is no different. As we mentioned before, the options are split into two menu systems; Main and Q.Menu. The menu is a white screen with black writing. It looks pretty but people who are hard of sight could find that the white background bleeds over the black writing. If you have this issue then it's worth looking at the camera first. There's no option to change the colour co-ordination in the menu system.

It seems that to get the full 10fps continuous shooting, you have to have the perfect conditions. We fixed the ISO to ensure a fast enough shutter speed and got loads of light before realising the issue: It doesn't take 10 pictures. It takes four in 0.36 of a second. That translates to roughly ten per second.

As we mentioned earlier, playback is performed by flicking the switch down on the back of the Panasonic Lumix DMC-SZ7. This can be done when the camera is off and subsequently powering it up will prevent the lens from coming out. The default setting is the image taking up the entire frame with some basic info such as the date, image number and resolution used skirted around the edge. Pressing the display button will scroll through alternative views such as shooting info (aperture, ISO, white-balance and shutter speed) and no information.

The playback menu gives the option to mark pictures for upload, add text, resize crop or protect from erasing among other things. More digital compact cameras are coming out with extensive editing tools and it's a shame not to see more here. It's not even anything to do with the price because cheaper cameras have more features on them.

There's usually very little in a digital camera box these days and the Panasonic Lumix DMC-SZ7 is no exception. Aside from the camera and battery, there's a wrist strap, camera charger, basic owners manual and CD with the full manual, PHOTOfunSTUDIO 8.0 AE and LoiLoScope for Windows.