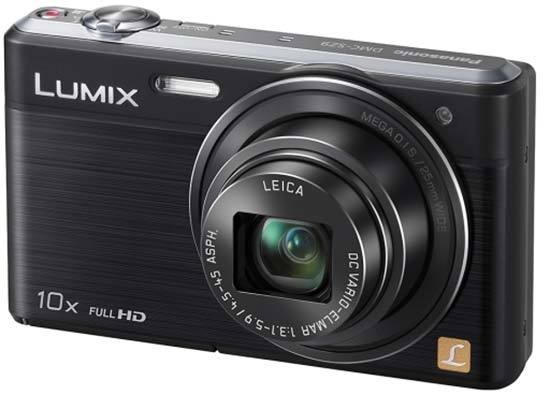 The Panasonic Lumix DMC-SZ9 is an affordable, svelte digital compact camera boasting an array of features such as a 16.1 megapixel MOS sensor, 10x optical Leica designed zoom lens (25-250mm in 35mm terms), a bright 3 inch LCD screen, built-in wifi connectivity, Full HD video and 14 digital effects. With this many features on a camera that costs just £200, will the image quality match up to the impressive feature-set? In this review, we intend to find out. The Panasonic SZ9 is available in silver or black.

Panasonic were one of the earliest manufacturers to design their digital compacts with a retro look to them. Using features such as brushed metal, using a certain shape for the body that resembled an old fashioned camera, then placing the lens in a particular place on the body to accentuate that feel. So it was surprising when they seemingly abandoned that approach – especially with the boom in retro and vintage – and went for more sleek looking cameras.

However, it looks as though they're back because, along with other models in the current range, the SZ9 is a lovely looking camera that harks back to the olde days of photography. Maybe not the days of bellows and metal plates, but maybe a 1950's 35mm camera?

The 10x optical zoom pushes the lens out of the body slightly, so it's not entirely flush. Still, instead of try to mask it away, Panasonic have chosen to wrap a big bezel around it to show it off. It also gives the lens the appearance of being bigger than it really is. As we all know; size does matter.

The Panasonic Lumix DMC-SZ9's lens is made to a specification designed by Leica, a German lens manufacturer – in fact, one of the best in the world – and starts at 25mm. It's not the widest available, but that would only cause barrel distortion. The full test will reveal if the lens suffers from it anyway. Obviously, a 10x optical zoom means that the 25mm wide setting stretches out to 250mm at the top end. That's enough to prevent you from having to walk to things.

Interestingly, Panasonic have done away with the switches on the DMC-SZ9 – possibly due to keeping costs down – so the camera is powered up using the small, square button on the top plate. It sits flush with the body, just next to the shutter release which is raised slightly to accommodate the zoom ring. A direct video record button is situated on the opposite side of the shutter release on the right shoulder. The small holes are the stereo sound microphones.

The SZ9 is shaping up to be a great little compact to simply slide into a pocket and use on a day out when carrying around bulky camera gear simply won't do. However, if you're the type that has larger fingers, you may find the small buttons on the back difficult to operate.

The Panasonic Lumix DMC-SZ9 has wifi connectivity, so you're able to link up to the internet and upload images to a portfolio on one of several approved sites. This is a great resource for young, travelling photographers as it means you don't have to mess about with huge memory cards and you can safely store them online where friends and family back home can view them instantly. Regular uploading means parents will be happy that you're safe, so it's a triple whammy. In fact, the SZ9 seems to be a camera designed for travelling. In the Setup menu (accessed by pressing the Menu button and selecting the section with the spanner icon), there's options to set the World time, set a Travel date and switch the camera into Airplane mode. This latter feature simply stops you from activating the wifi which can interfere with navigation systems and doesn't – as we thought – choose the wrong week to stop drinking coffee.

The other buttons on the back are similar to the layout and organisation of other digital compact cameras. There's a central control pad with four buttons surrounding it. The pad navigates around the menus on the camera as well as doubling up for shooting options such as macro, exposure compensation, flash and macro. The Mode button is for selecting the way the camera takes pictures such as Auto, Intelligent auto, Panoramic, Creative filters or Scene modes. The Creative filters are digital effects that replicate a particular look or type of photography. Effects such as Low key, Soft focus, Impressive art and High dynamic will interest users more interested in photography while Retro, Toy effect and Cross process will please the Instagram crowd.

The cost of the Panasonic Lumix DMC-SZ9 is apparent in the build quality. A camera at a lower price wouldn't have a metal casing, decent lens or even a good quality USB port cover. However, the SZ9 has all these. Interestingly, some of the budget cameras from other manufacturers have recently had metal tripod connectors fitted to them. Weirdly, this has been a kind of unwritten benchmark in quality for many a year until the last 12 months have changed that. Not so with the SZ9, it still has a plastic connector (bush). It's a disappointment to photographers looking to take long exposures at night because the high volume of use that the tripod will see could make it wear sooner.

The menu systems on the SZ9 are very easy to read and navigate your way around. The Main menu has four sections: Rec, Motion Picture, Setup and Wifi. The Rec section goes into the camera modes and features that you need a lot of access to, such as ISO, resolution and white-balance. But they're not as commonly used as the flash options, macro or exposure compensation, which have dedicated buttons on the back of the camera. In the Motion picture section, you make changes to the video features such as the resolution, autofocus and wind cut. We've delved into the Setup menu earlier in the review and discussed the travelling options available. There are other interesting options available in the Setup menu, though, such as Monitor luminance, Economy mode, Histogram and the option to reset everything. If you want to only reset the wifi, that can be done as well as a number reset for the pictures you're taking. The latter could lead to a clash of file numbers when downloading and cause overwriting.

Focusing is quite fast on the Panasonic Lumix DMC-SZ9 and we think this helped it in it's cold start test. The results yielded a faster time than we're used to. The time it took to switch the camera on, focus and take a picture was a little over two seconds. That's around half a second faster than other digital compacts that we've tested recently. Not bad going and will help with candid photography.

The DMC-SZ9 has four burst modes. The first two are similar in what they achieve. They both use continuous AF while shooting, just at different rates; 2fps (frames per second) and 5fps. The latter is arguably the one to choose when shooting continuously. We managed a total of 14 pictures in a ten second period which averages at 1.4fps. Realistically, the camera took four pictures in the first second. Not the 5fps advertised, but we think that could be down to the AF. In this mode, the focusing is in continuous, so as the camera is shooting, it will shift if necessary. This focus shift will stop the camera taking pictures – only briefly in our test as we barely moved – while it focuses. The 5fps will be a clinical test performed by Panasonic. Both of these settings are done at full resolution. The rapid burst mode drops the resolution to 5 megapixel, though. This is to ensure the processor can keep pushing the pictures through at a fast enough rate. Shutter lag sits at 0.08sec which is standard for a digital compact camera and our reflexes.

Press the small Playback button on the back of the camera and you can look at the pictures you've already taken. This can be done regardless of whether the camera is powered on or off. If it's off, you have to hold the button down for a second or two. Press up on the pad and you can retouch the picture either with an Auto retouch feature, a Beauty retouch or Creative retouch. Press the Mode button and you can choose different viewing options such as a slide-show, calendar or filter by specifying certain parameters such as only pictures or only video. The Playback menu has some fascinating features such as Location logging (not using GPS, but manual input), Titles, Retouch, Video divide, Cropping or Resize.

In the box, there's a camera, rechargeable lithium ion battery, charger, wrist strap, Basic owner's manual and a CD that holds the full manual along with PHOTOfunSTUDIO 9.0 editing software. There's also a link to a trial version of LoiLoScope – a video editing software program.