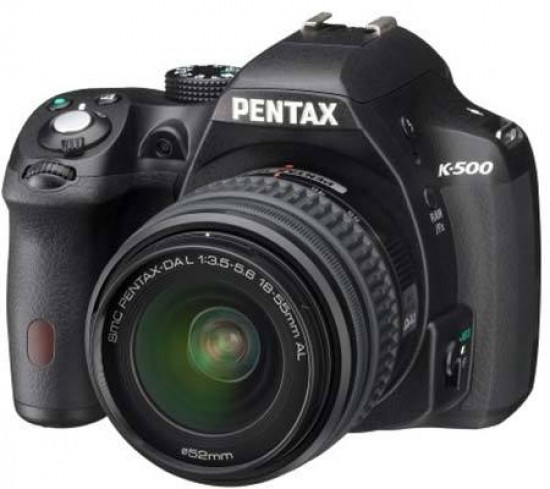 The Pentax K-500 is identical to the K-50 that we reviewed yesterday, just without that camera's (and kit lens') weather-proofing, which actually makes the K-500 a bit of a bargain if you never intend to shoot regularly in the rain or more extreme environments. Oh, and it doesn't have an electronic level and only comes in black, rather than the 120 different colours that the K-50 can be configured in.

The K-500 is a very minor refresh of 2012's K-30 DSLR camera, additionally offering support for Eye-Fi wireless cards, an extra ISO 51200 setting, and more sober styling than the "aggressive" K-30. In all other respects the new K-500 is identical to the old K-30, so perhaps the biggest attraction of the K-500 is its very affordable price-tag on launch.

By not deviating from the K-30 in any great way, Pentax have delivered another excellent DSLR camera that delivers a lot of features and performance without breaking the bank. We've always had a soft spot for Pentax DSLRs and the new K-500 is no different. This is an appealingly well-specified, intuitive and customisable DSLR with few real drawbacks. The combination of near 100% viewfinder coverage and the large, high-res LCD screen make the K-500 a joy to use in terms of image composition, and the fast 6fps continuous shooting rate and responsive AF system make it quick to use.

The only real negative points in terms of handling are the rather slow contrast AF system which detracts from using the Live View mode, while shooting video is still a rather cumbersome affair that suffers from the lack of a one-touch record button, a socket for an external mic, an HDMI port for easy connection to your HDTV, and continuous AF during recording. Compared to a cutting-edge DSLR like the Canon EOS 70D or the new breed of compact system cameras, Pentax's Live View and movie recording systems are beginning to feel a little antiquated, although we can excuse that on what is after all an entry-level camera.

The K-500's still image quality remains excellent though, producing noise-free images all the way from from ISO 100-1600. Noise starts to become apparent at ISO 3200, with a little more noise and smearing of fine detail at the higher settings of 6400 and 12800, while 25600 is only really suitable for smaller prints and the new fastest setting of 51200 is best ignored altogether. Exposures were generally 1/3rd EV stop under-exposed, perfect for retaining detail in the highlight areas without sacrificing the shadow areas too much, and colours were accurate using the default Bright setting.

We can't think of any other similarly priced DSLR that offers so many features, so if you can live with the lack of weatherproofing that the more expensive K-50 offers, the new Pentax K-500 makes the perfect first DSLR for stills shooters.