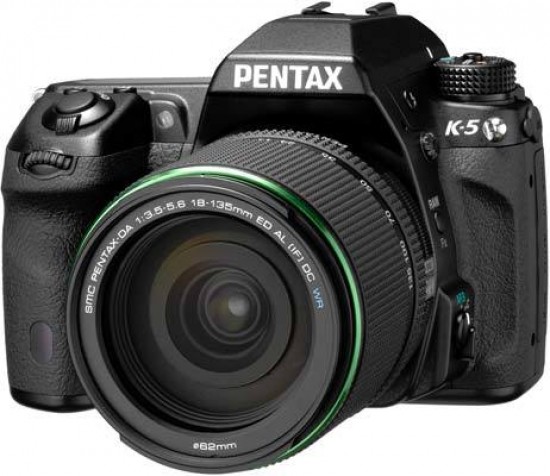 The Pentax K-5 combines the proven design of the K-7 with an exciting new 16.3 megapixel APS-C sensor to create an appealingly well-specified, intuitive and customisable DSLR with few real drawbacks.

Virtually identical to the K-7, Pentax haven't taken any chances with the design of the new K-5, which is a good thing in our book as the K-7 was and is a great DSLR to use. The combination of 100% viewfinder coverage and the large, high-res LCD screen make the K-5 a joy to use in terms of image composition, and the faster 7fps continuous shooting rate and slightly faster AF system make it quicker to use. The only real negative point in terms of handling is the improved but still rather slow contrast AF system which detracts from the Live View mode.

The K-5's image quality is excellent, producing noise-free images all the way from from ISO 80-800. Noise starts to become apparent at ISO 1600, with a little more noise and smearing of fine detail at the higher settings of 3200 and 6400, while the fastest speeds of 12800, 25600 are suitable for smaller prints. The incredible headline-grabbing top-speed of 512000 is frankly unusable - Pentax should have followed Nikon's lead and stopped the range at 25600. Still, as with the D7000, very impressive results for a 1.5x sensor that finally brings Pentax up to speed with the competition in terms of low-light performance.

Exposures were generally 1/3rd EV stop under-exposed, perfect for retaining detail in the highlight areas without sacrificing the shadow are as too much, and colours were accurate using the default Bright setting. The HDR mode makes it easy to create images with greatly expanded dynamic range, although you don't have too much control over the final effect and you really need to use a tripod to keep things sharp. The D-Range options help make the most out of both the shadows and highlights in a high-contrast scene, while the multi-exposure and creative processing modes and the vast range of digital effects are a nice creative addition.

Making its Pentax debut on the K-7, the inclusion of Full 1080p HD video is sure to generate a lot of interest. Unfortunately, as with most of the other DSLR cameras on the market that offer video recording, it's not the most user-friendly experience, with no handy one-touch recording, reliance on manual focusing, inability to change the aperture or shutter speed during recording, enormous file sizes that quickly fill your memory cards, and the inherent handling quirks of the DSLR format. On the plus side, there is a socket for an external mic and an HDMI port for easy connection to your HDTV.

While the K-5 doesn't differ all that much from the older K-7, it does add some significant new features which help ensure that Pentax's prosumer DSLR continues to be a very attractive alternative to the Big Two's offerings. It may lack the Nikon D7000's continuous AF during movies and the Canon EOS 60D's articulating screen, but the K-5 is arguably more intuitive to use and more customisable than either. If you haven't considered Pentax DSLRs before, then the new K-5 is the perfect excuse to take a much closer look.