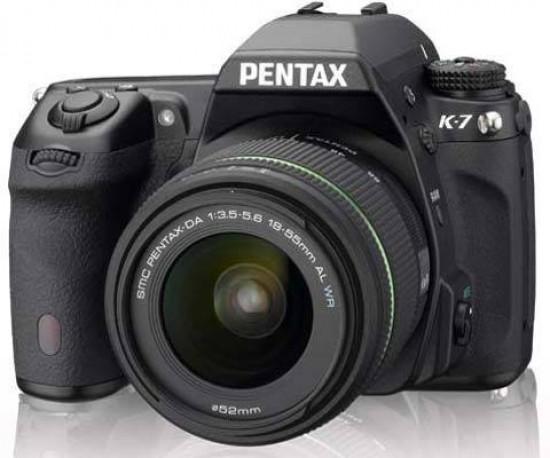 All of the sample images in this Review were taken using the 14.6 megapixel Excellent JPEG setting, which gives an average image size of around 9Mb.

During the review, the Pentax K-7 produced photos of very good quality. The built-in pop-up flash worked well indoors, with no red-eye and good overall exposure. The night photograph was excellent, with the maximum shutter speed of 30 seconds and Bulb mode allowing you to capture enough light in all situations. The 14.6 megapixel JPEG images were a little soft straight out of the camera at the default sharpening setting and ideally require some further sharpening in an application like Adobe Photoshop, or you can change the in-camera setting. Image stabilisation via the camera body is a feature that helps the Pentax K7 keep up with its competitors, and one that works very well when hand-holding the camera in low-light conditions or when using the telephoto end of the zoom range. The Digital Filters quickly produce special effects that would otherwise require you to spend a lot of time in the digital darkroom, although some of them are less useful than others. The D-Range options help make the most out of both the shadows and highlights in a high-contrast scene (and it works for both JPEG and RAW files), while the HDR mode greatly expands the dynamic range of a JPEG by combining three differently exposed images in-camera. The multi exposure mode combines between two and nine different JPEG or RAW images into a single photo. Noise is the main issue for the Pentax K-7, starting to appear at ISO 800 along with a noticeable colour shift, and becoming easily detectable at the faster settings of ISO 1600, 3200 and 6400 when viewing images at 100% magnification on screen (particularly in the RAW files).

There are 7 ISO settings available on the Pentax K-7. Here are some 100% crops which show the noise levels for each ISO setting, with JPEG on the left and the RAW equivalent on the right:

The Pentax K-7 has 4 different JPEG file quality settings available, with Excellent being the highest quality option, and it also supports RAW (Pentax's PEF format and Adobe DNG). Here are some 100% crops which show the quality of the various options, with the file size shown in brackets.

The Pentax K-7 lets you dial in shutter speeds of up to 30 seconds and has a Bulb mode as well, which is very good news if you are seriously interested in night photography. The shot below was taken using a shutter speed of 20 seconds, aperture of f/8 at ISO 100. We've included a 100% crop of the image to show what the quality is like.

The Pentax K-7 has a Shake Reduction mechanism built into the camera body, which allows you to take sharp photos at slower shutter speeds than other digital cameras. To test this, I took 2 handheld shots of the same subject with the same settings. The first shot was taken with Shake Reduction turned off, the second with it turned on. Here is a 100% crop of the image to show the results. As you can see, with Shake Reduction turned on, the images are sharper than when it's turned off. This feature really does seem to make a difference and could mean capturing a successful, sharp shot or missing the opportunity altogether.

The Pentax K-7's HDR Capture option (only available for JPEGs) takes three images with different exposures, and then records a single image that combines the properly exposed parts of each one, expanding its dynamic range. Here is an example which was shot with the three different modes (Off, Standard and Strong). It's important to always use a tripod to prevent camera shake from blurring the HDR image, and it doesn't work very well for moving subjects.

The Pentax K-7 offers seven different Digital Filters, which allow you to quickly apply an artistic effect to a photo before taking it (JPEG images only). They are shown below in the following series, which demonstrates the differences. Note that applying the Digital Filters slows the camera down somewhat, as it has to process the image for a few seconds after it's taken.

The Pentax K-7 has a multi exposure mode that allows you to combine between two and nine different JPEG or RAW images into a single photo. Here are some examples: