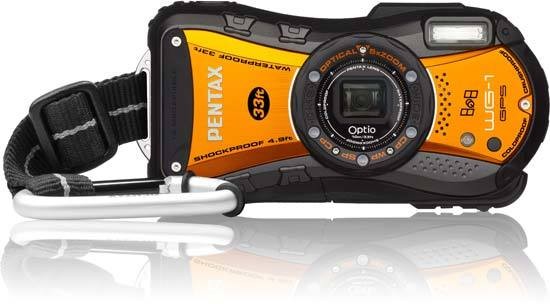 It's a hard world that we live in with problems at every turn, so we need a camera that can withstand the hardships that get thrown at us in day to day life. Pentax have released the Optio WG-1 GPS, a robust compact camera which sports 14 megapixels, a 5x optical zoom offering a focal range of 28-140mm, 720p HD video, 2.7 inch LCD screen and is water-, shock-, cold- and crush proof. If all this is enough to endure the rigours of being outdoors, the WG-1 will also remember where you were when you took the picture thanks to its built-in GPS system. Available in green, orange or black, the Pentax Optio WG-1 GPS costs £299.99 / $329.95.

There are a few design elements to the WG-1 that appear to have no immediate valid reason other than for it to look chunky. We can see the logic: the camera is supposed to be robust and if it looks slim and slinky, people may think it won't cope with the dropping and the crushing. Because of this design approach, we think the camera will only really appeal to a select few. Sure, the adventurous types that like extreme sports or holidaying in the cold will be interested but will they like the design? It's a critical point because with some people looks can be everything.

It's an unusual design and maybe that's why we're giving it a hard time. One side fans out like a bow tie while the other curves around. On the front of the Pentax Optio WG-1 GPS, the lens sits in the centre with a large protective bezel around its circumference. Dashes have been painted on to represent either a watch or a compass but they don't seem to have any particular function other than to remind us of a Casio G-Shock watch.

Interestingly, there are 5 small LED lights built into this bezel which are used for the camera's digital microscope mode. This mode gives the camera a 1cm close focusing mode and once you've fixed the unique macro stand to the Pentax Optio WG-1 GPS, you can enjoy evenly lit close ups of insects. The stand is certainly unique, if nothing else. It appears similar to a lens adapter that simply clips onto the front of the camera and then to get close to your subject, you lean the camera forward and the "stand" supports it at an angle. Keeping this on doesn't detract from normal picture taking and in fact, may help reduce some lens flare.

Let's take a look at the proofing of the Pentax Optio WG-1 GPS. It's waterproof up to 10m which is around 32ft. It should be enough for basic scuba diving but it's still best to use a proper underwater camera if you're unsure. We're happy with the specification of the shock proofing. It can cope with drops from a height of up to 1.5m which is around 4ft, 9inch. This is around the arm height of an adult so will certainly cope with accidental dropping or banging against a cliff face as it hangs from your belt.

One of the newer additions to the proofing system is that it's crush proof. According to the Pentax specification, the WG-1 can cope with having a weight of up to 100kg on it. In imperial measurements, this equates to just over 15 stones so it can cope with all but the portly. The area that we find the most dubious - and this is with any camera of this kind, not just the Pentax - is the cold proofing. It's cold proof down to -10 celcius which should be ok for skiing holidays in the Alps but not so good for trips to either of the Poles.

Small screws are inserted into the front of the body at strategic points and all access points to the internal areas of the Pentax Optio WG-1 GPS such as the battery door and HDMI port have locks on them to place pressure on the rubber seals that keep out water. However, in our test, we found a small amount of play in the battery door. Once the locking switch has been pulled down, the door slides across slightly and this is where the play is. We contacted Pentax to check it and they said: "There is a degree of play in the battery door and this is normal. The movement should be no more than 1mm." So if you're looking at this camera and notice very slight movement on the battery door, you know it's ok.

The buttons on the Pentax Optio WG-1 GPS are quite small which is unusual for an underwater camera. They may be difficult to use in snowy conditions where you may prefer to wear gloves. The power button on the top of the camera is flush to the body which looks nice. On the back, it looks quite busy with several buttons all vying for space. Because there's so many, they're compacted quite small and bunched up. At the top is a small zoom rocker with the playback button beneath. The main menu and face detection buttons are located above the navigation pad while the ever present green button sits at the bottom doubling up as the delete button when in playback. Given the amount of space available on top, the power button could've been moved to make space for the zoom switch and the face detection could be placed in the menu. This would create more space and obviate the current issues.

Of course all this painting your lips white and wearing tennis racquets on your feet will amount to nothing if you can't back up your pictures of your extreme trip with some proper geographical support. Thankfully the Pentax Optio WG-1 GPS has a GPS system built-in to it. If you've been living under a rock and don't know what GPS is, it stands for Global Positioning System and it uses satellites (we'll assume you know what satellites are) to track your movements anywhere on the globe. When you're ready to upload the information, the camera gets the GPS records then marries them up with the pictures using the time & date information in the EXIF data of the photograph.

Normally it means you have to ensure you have the correct time & date but the WG-1 will use the time information from the satellites to adjust its own time setting which is a really cool idea. GPS systems in cameras can be sensitive and the Pentax one is too. It may have trouble locating a satellite  if you're under water or under ground, in tunnels, among high-rise buildings, near power lines, in woods or near a mobile phone using a band of 1.5Ghz. At least it's not stopped by clouds and it's likely that you'll be outdoors because this is an outdoors camera after all.

The Pentax Optio WG-1 GPS's main menu is a superimposed type so you can still see the frame behind it. It's well spaced and clearly signed. There are two tabs for shooting and for adjusting settings. Pressing the ok button will execute commands and while not in the menu will scroll through display options, which isn't clearly marked. In playback, pressing the menu button will bring up the previous version which doesn't have a playback tab. If you want to do anything to the pictures in camera, you have to press down on the navigation pad which is listed on the screen, it's just an unusual way of doing things.

In the box there's what we can only describe as "a big bunch of stuff". Along with the usual suspects of the driver CD, battery charger and USB cable, there's also a thick canvas strap with a carabiner attached for using on rucksacks or when climbing which could come in useful. The most unusual item is the HDMI cable for watching HD video on television. The opposite end of the cable has analogue connections; the yellow video  and white audio plugs. That's right, it only has mono sound which is a bit weird because it completely ruins the entire idea of high definition.