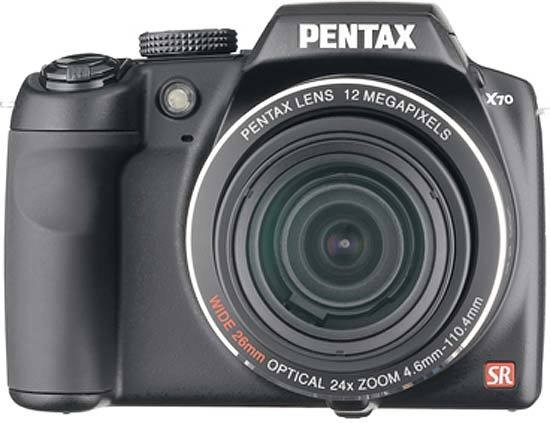 It's possible to achieve pleasing results with the Pentax X70, though at times it feels like you have to work at it. When shooting HD video at the full extent of the zoom it's almost impossible to hand hold the camera steady enough to ensure a smooth, jerk free image. Just as disappointingly, the framing cannot be altered once recording has commenced as the optical zoom is disabled. Your framing merely stays the same as it was before the shutter release button was pressed. While not uncommon on big zoom bridge models, this seems something of an over-sight as the broad focal range is the camera's major feature.

As regards still captures, though pictures feel balanced in terms of exposure, with well saturated and colourful in the main, being flatteringly sympathetic to skin tones, there's occasional softness when shooting at maximum telephoto - not really a great surprise - whilst upon close inspection pixel fringing is visible between areas of high contrast. Our white wall shots reveal quite pronounced barrel distortion at maximum wide angle however.

In terms of low light sensitivity, the Pentax X70's performance is (forgive the pun) no great shakes, with noise creeping in from ISO 400 upwards in interior shots taken without the aid of flash. Taking photographs in low light at settings up to ISO 800, results are usable, though we'd advise steering clear of ISO 1600 and above as detail is noticeably softened. Shooting at ISO 6400 images are particularly disappointing; detail is smudged and pictures take on more of an impressionistic, painterly quality.

There are 7 ISO settings available on the Pentax X70. Here are some 100% crops which show the noise levels for each ISO setting.

The Pentax X70's 24x zoom lens has a massive focal range, as illustrated by these examples:

The Pentax X70 handled chromatic aberrations quite well during the review, with some purple fringing present around the edges of objects in high-contrast situations, as shown in the examples below.

The Pentax X70 allows you to focus on a subject that is just 1cm away from the camera. The first image shows how close you can get to the subject (in this case a compact flash card). The second image is a 100% crop.

The flash settings on the Pentax X70 are Flash-on, Flash-off, Red-eye reduction, Low-speed synchro, and Low-speed synchro + Red-eye. These shots of a white coloured wall were taken at a distance of 1.5m.

The Nikon D3000's maximum shutter speed is 4 seconds, which is not very good news if you're seriously interested in night photography. The shot below was taken using a shutter speed of 1 second at ISO 800. I've included a 100% crop of the image to show what the quality is like.