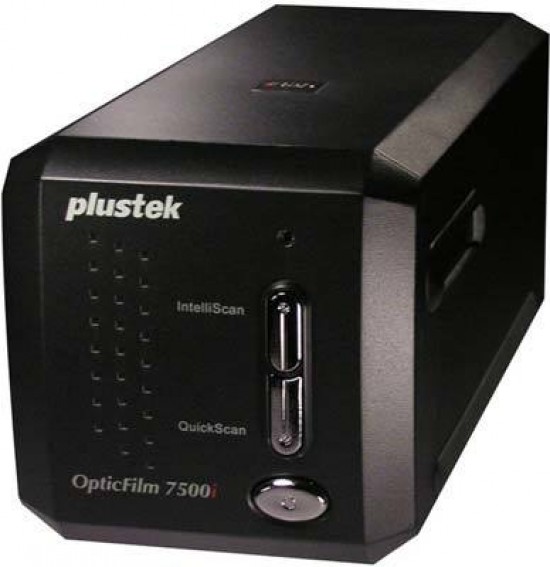 The OpticFilm 7500i is Plustek's first 35mm film scanner to offer compatiblity with both Mac OS and Windows.

Headline specifications and features of the OpticFilm 7500i include an optical resolution of 7200dpi, dMax of 3.5, 24 or 48-bit scanning, infrared Smart Removal of Defect (iSRD), multi-sampling, multi-exposure and support for both film strips and mounted slides.

The OpticFilm 7500i scanner comes bundled with either SilverFast SE Plus or SilverFast AI Studio, and is marketed at a very attractive price of £225 in the UK, with the AI version being more expensive but still affordable at £395.

The Plustek OpticFilm 7500i ships in a large box, but the scanner itself is among the smallest I've seen. Also included in the box are a padded carrying bag, two 35mm film holders - one for strips of up to six frames and another one accommodating up to four mounted slides -, a USB cable, a mains adapter, an installation CD, SilverFast software on another CD and, with the AI version, a 35mm IT8 calibration target as well. 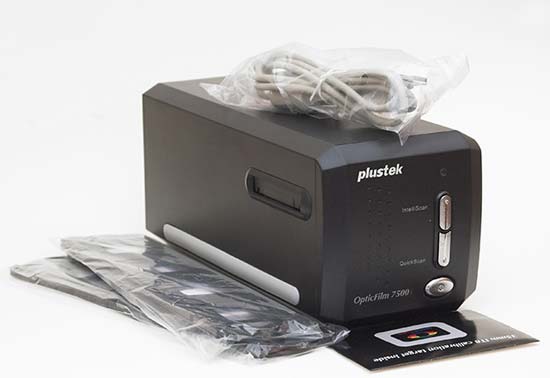 As noted above, you get two different 35mm film holders along with the scanner. Both are inserted through a dust-protected opening on the side of the device. The one for mounted slides is reasonably solid and holds the transparencies - up to four at a time - firmly in position. The same cannot be said of the hinged filmstrip holder, which feels a bit flimsy. The hinges are on the shorter side, making it awkward to open and close the holder. It would have been a better idea to put the hinges on the longer side, at least from a handling point of view. It's really only made for use with perfectly flat strips - any curling in the film will make it very hard to position it properly in the holder, not to mention it will likely result in a more or less blurred scan.

The Plustek OpticFilm 7500i AI comes bundled with Plustek's own QuickScan utility, LaserSoft's highly regarded SilverFast AI Studio - which you can install either as a standalone application or as a Photoshop plug-in -, plus a basic image editor called NewSoft Presto! ImageFolio and a document management solution named NewSoft PageManager.

There are two ways to scan your photos with the OpticFilm 7500i AI. One is called QuickScan, while the other is dubbed IntelliScan. The first uses Plustek's own QuickScan utility, whereas the other involves the use of SilverFast AI Studio. Each has its dedicated button on the front panel of the scanner, but both can also be initiated from the computer as well. 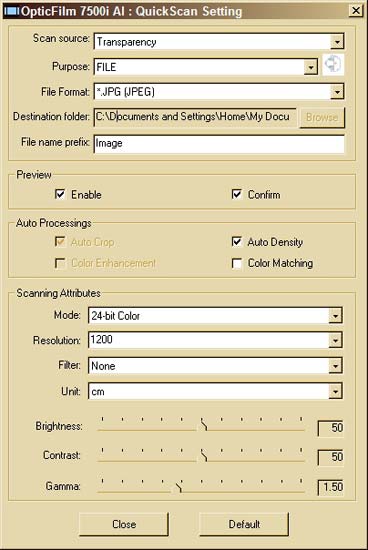 As the name suggests, the QuickScan option is for those who do not want to fiddle too much with settings. A few of them can be adjusted in a dedicated window, but the choices are limited. You can tell the scanner whether you are scanning a negative or a transparency, whether you want to open the scanned photo in Presto! ImageFolio or just save it on your hard disk, you can specify the file format, the destination folder, a file name prefix, the scanning mode (24 or 48-bit colour, 8 or 16-bit black-and-white), the input resolution, apply one of a few image filters, and make basic brightness, contrast and gamma adjustments. In addition, there are a few tick-boxes, allowing you to enable a preview window to be shown with each scan and to let the scanner auto process the images to some degree. Crucially, you do not get access to infrared dust removal, multi-scanning, multi-exposure, negative film profiles or manual colour correction when using the QuickScan utility - in other words, you are giving up most of the features you have paid for. For this reason, those who plan on using the QuickScan utility only should consider buying the cheaper OpticFilm 7300 instead of the 7500i.

The above adjustments affect all scans until you call up the QuickScan Setting window again. If you opt to enable the scan preview, a few of the settings can be tweaked individually with each scan (but others cannot, making QuickScan cumbersome to use, which kind of defeats the very point of this feature). 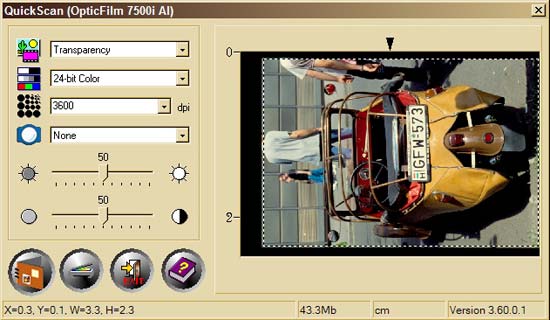 The preview window of the QuickScan utility

If you've installed SilverFast AI Studio, you can call it up by pressing the IntelliScan button on the scanner's front plate. SilverFast is a professional-grade imaging application, and as such, it is the exact opposite of the QuickScan utility. The options it offers are dazzling to say the least, and intuitiveness isn't among the program's virtues. This means that even if you have a fair bit of experience in image editing, you may find that it takes time to master this peculiar piece of software. On the CD, there are a number of MOV files that demonstrate what the different functions do and how they are meant to be used - they are worth checking out.

Given that QuickScan provides no access to some of the Plustek 7500i's most useful features, you will have to learn how to use SilverFast, no matter how intimidating it may seem at first sight. iSRD, multi-sampling, multi-exposure and a number of other functions are only accessible via this program.

To be fair though, some of SilverFast's features are actually quite straightforward to use. One of the handiest is called NegaFix. Negative films are not simply the inverse of positive film - they all have an orange mask, which needs to be filtered out in order to get the colours right. To make matters more complicated, every type of negative film has its own version of this orange mask, giving you no one-size-fits-all solution to this problem. This is where NegaFix comes in: it stores profiles for a legion of print films, so if you intend to scan one that's included in its database, chances are you can get over the colour issue quickly and easily.

Many of SilverFast's functions are accessible via dedicated buttons arranged in a vertical row along the left side of the program's scan preview window. One of these is iSRD. The OpticFilm 7500i - as well as the older 7200i but not the 7200 or the 7300 - is capable of infrared scanning. This is important because dust and scratches respond differently to infrared light, making it possible for the scanner and the scanning application, in this case SilverFast, to isolate them and clone them out. iSRD, or infrared Smart Removal of Defect, is SilverFast's approach to this. It works on practically all colour films (except Kodachrome), as the sample below demonstrates. 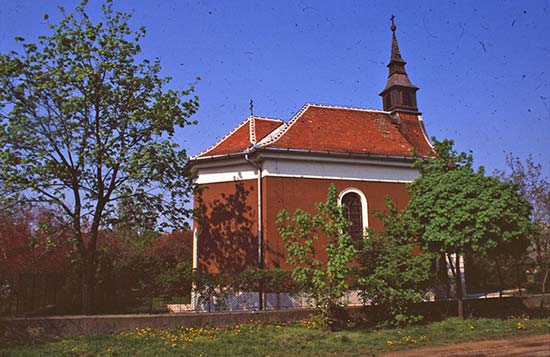 A rather dirty frame of Fujichrome Sensia. 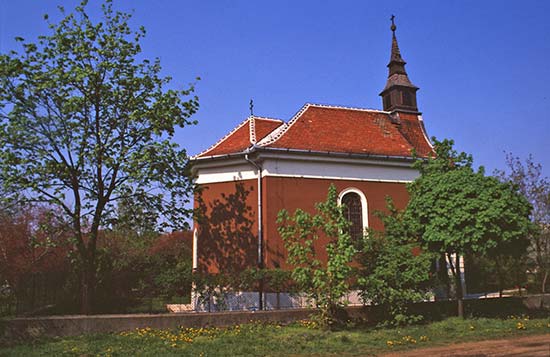 See how well iSRD cleaned it up.

The crops below show the same detail of the photo above, scanned at 1200dpi with and without iSRD:

That is very nice, but what about black-and-white films and Kodachrome? iSRD cannot be used with them. Fortunately, SilverFast also has a software-based SRD solution, which is user configurable to boot.

Another option that is only available when scanning with SilverFast is multi-exposure. This serves to improve the dynamic range of the scan by scanning the photo twice, with different levels of analogue gain applied. Apparently, you need to scan in 48-bit mode to take advantage of this, and save the resultant scan in a 16-bit-per-channel format such as TIFF or JPF. These can be converted to 8-bit-per-channel formats later, in an appropriate program. I expected this function to improve shadow detail, but found it to be most effective on the highlights, as these crops showing a detail of a white T-shirt show:

Note: multi-exposure is not to be confused with multi-sampling, which is a function aimed at eliminating scanner noise.

7200dpi sounds like an awfully lot of resolution, and indeed, photographs scanned at this setting produce digital images of nearly 70 megapixels. But how much detail do they really contain? Let's find out!

Below is a scan of a frame shot on Fujichrome Velvia using a sharp prime lens. 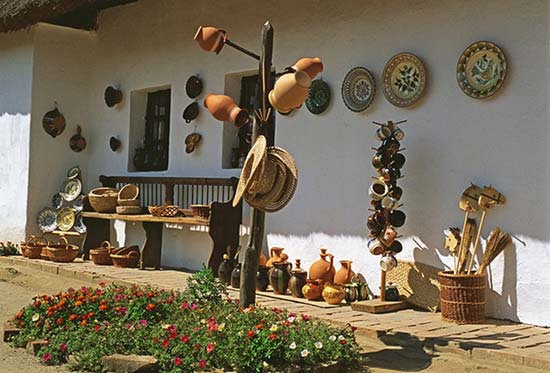 See those plates on the wall? Take a closer look.

These crops have had no sharpening of any kind applied to them. Also, remember that you are peeping at portions that represent less than 0.2% of the total frame area! Now look at the thin concentric lines in both crops. You can see how the 7200dpi scan hangs on to them all, even where the 3600dpi scan loses them. Now to be honest, this was one of just a few cases where I was able to detect any difference between the amount of detail captured at 7200dpi versus 3600dpi. Most of the slides - and negatives - I scanned were taken with hand-held manual-focus cameras with consumer-grade lenses, and these did not typically contain enough detail to warrant being scanned at such high resolution. 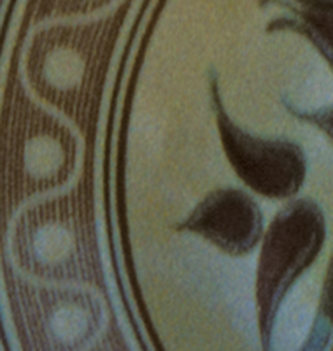 But, since high resolution is one of the main selling points of this scanner, I was curious to find out whether it could outperform a lot more expensive yet theoretically lower-resolution model of a leading manufacturer. For this reason, I had the same transparency scanned professionally using a Nikon Coolscan 8000 ED. Some may cry foul at this point, since the Nikon is a top-of the line device designed for professional use - but it's an old model and at 4000dpi, its resolution is substantially below that of the Plustek's 7200dpi, at least on paper. So I took approximately the same crop from the Nikon scan, and 'uprezzed' it to match the size of the 7200dpi crop. The result is shown at left.

Even though the Nikon scan is interpolated up from a lower resolution, it is clear that it's sharper and more detailed than the Plustek at its native 7200dpi. How can this be? I think the Plustek's presumably cheaper, fixed-focus optic can be one of the culprits here, which probably doesn't compare well with the Nikon's high-grade ED lens and auto-focus.

But just because the Plustek's allegedly higher resolution doen't quite stand competition with the Nikon's 4000dpi, it doesn't mean that it's a low-resolution scanner in absolute terms. Quite the contrary - just remind yourself again how small a portion of the full frame we are peeping at here, and you'll agree that the Plustek is quite an achiever, especially at the price point it is being sold at.

If you were thinking of buying the Plustek OpticFilm 7500i AI for its headline-grabbing 7200dpi resolution, you might feel a little disappointed. The real resolution of the scanner is apparently somewhere just below 4000dpi. But I'll hasten to add that this is still a very good figure for a film scanner - what's more, I'll go as far as to say it's overkill for most shots. For the majority of a typical hobbyist's photographs, scanning at around 2400dpi should be enough. This resolution yields sharp 8+ megapixel files that can be printed at magazine quality up to A4 size. It also cuts down on scanning times and file sizes, which can be humongous with 7200dpi scans, particularly those created in 48-bit mode.

What's more important than sheer resolution is that the Plustek OpticFilm AI is a scanner capable of infrared scanning, and comes bundled with a program that can take advantage of this - and much more. SilverFast AI Studio is a professional-grade imaging application that gives you more than you bargained for, offering everything from powerful colour management tools to complicated tone curve adjustments. But it also features some ingeniuous and easy-to use functions such as NegaFix and MultiExposure, both of which can make your life easier and improve the quality of your scans.

Overall, I can recommend the Plustek OpticFilm 7500i AI to any amateur photographer with a moderate archive of films - as long as you take your time to learn how to use it and the SilverFast AI Studio software, you are unlikely to be disappointed.