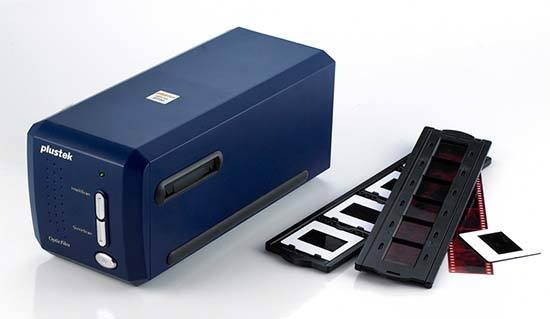 The Plustek OpticFilm 8100 is the latest entry-level model in Plustek's OpticFilm line of dedicated 35mm film scanners. Headline specifications and features include a hardware resolution of 7200dpi, dMax of 3.6, a choice of 24- or 48-bit scanning, multi-exposure, Mac/Windows compatibility and support for both film strips and mounted slides. The OpticFilm 8100 scanner comes bundled with SilverFast SE Plus 8, and is marketed at a very attractive price of £199.95 in the UK. Do note that unlike its more expensive sibling the OpticFilm 8200i, the 8100 model does not have an infrared channel to take advantage of SilverFast's iSRD (infrared Smart Removal of Defect) feature.

Like all other OpticFilm scanners, the Plustek OpticFilm 8100 has a small footprint but ships in a large box, complete with a padded carrying bag, two 35mm film holders - one for loose strips of up to six frames and another one accommodating up to four mounted slides -, a USB cable, a mains adapter, two CDs and a full-colour printed manual. 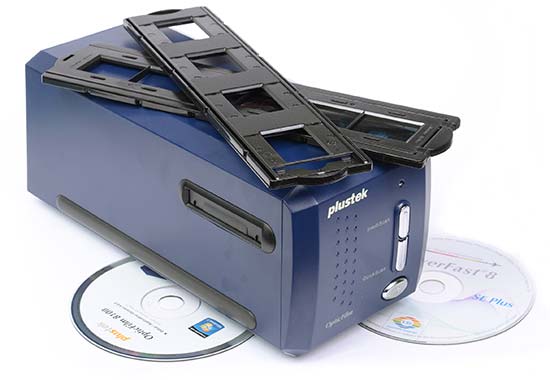 The following table summarises the key differences between the OpticFilm 8100 and its predecessors:

As noted above, you get two different 35mm film holders along with the scanner. Both are inserted through a dust-protected opening on the side of the device. The one for mounted slides is reasonably solid and holds the transparencies - up to four at a time - firmly in position. The same cannot be said of the hinged filmstrip carrier, which feels a bit flimsy. The hinges are on the shorter side, making it awkward to open and close the holder. It would have been a better idea to put the hinges on the longer side, at least from a handling point of view. Also, it's really only made for use with perfectly flat strips - any curling in the film will make it very hard to position it properly in the holder, not to mention it will likely result in a more or less blurred scan. As the OpticFilm 8100 lacks an auto-feeder the film carriers must be advanced by hand, with no provision for batch scanning. 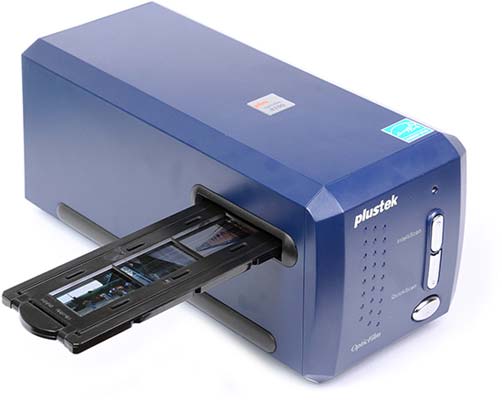 The Plustek OpticFilm 8100 comes bundled with Plustek's own QuickScan utility, a document management solution called Presto! PageManager, and LaserSoft's new SilverFast SE Plus 8 software. The first two programs are found on the same CD as the scanner drivers, whereas SilverFast comes on a CD of its own. The included manual offers detailed and easy-to-follow instructions, making software installation a breeze. The only (temporary) problem we encountered had to do with the online registration of our copy of SilverFast, but it did not prevent us from using the program.

There are two ways to scan your photos with the Plustek OpticFilm 8100. One is called QuickScan, while the other is dubbed IntelliScan. The first uses Plustek's own QuickScan utility, whereas the other involves the use of SilverFast SE Plus 8. Each has its dedicated button on the front panel of the scanner but both can also be initiated from the computer as well. 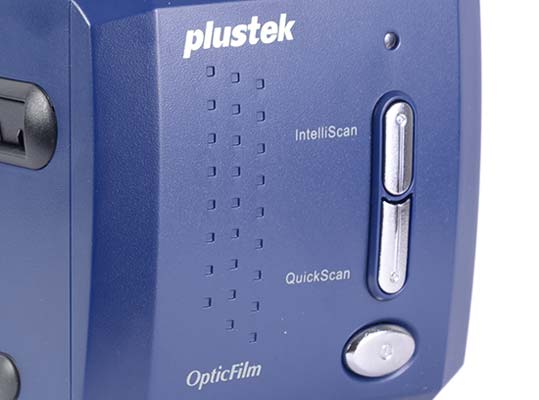 As the name suggests, the QuickScan option is for those who do not want to fiddle too much with settings. A few of them can be adjusted in a dedicated window, but the choices are limited. You can tell the scanner whether you are scanning a negative or a transparency, specify the file format, the destination folder, a file name prefix, the scanning mode (24 or 48-bit colour, 8 or 16-bit black-and-white), the input resolution, apply one of a few image filters, and make basic brightness, contrast and gamma adjustments. In addition, there are a few tick-boxes, allowing you to enable a preview window to be shown with each scan and to let the scanner auto process the images to some degree. Crucially, you do not get access to multi-exposure, negative film profiles or manual colour correction when using the QuickScan utility.

The above adjustments affect all scans until you call up the QuickScan Setting window again. If you opt to enable the scan preview, a few of the settings can be tweaked individually with each scan (but others cannot, making QuickScan cumbersome to use, which kind of defeats the very point of this feature). As far as we are concerned, we were not really happy with the results QuickScan gave us and opted to use SilverFast instead.

IntelliScan with SilverFast SE Plus 8

Once you've installed SilverFast SE Plus 8 you can call it up by pressing the IntelliScan button on the scanner's front plate. The interface has undergone a pretty radical makeover since the program's previous version – mostly for the better, though some quirks remain. Also, do note that “SE Plus” is not the most fully featured edition of SilverFast – that title goes to SilverFast Ai Studio, bundled with certain versions of the OpticFilm 8100's bigger brother the 8200i but not the 8100. For most people, the two most important deficiencies of SilverFast SE Plus versus SilverFast Ai Studio are the lack of automatic IT8 calibration and the inability to scan into a print-ready 16-bit-per-channel file (you can scan into archival-quality “16-bit HDR” and “48-bit HDR” files but these “raw” scans require a great deal of post-capture tweaking in an external editor / imaging application such as Photoshop or SilverFast HDR). SilverFast SE Plus users can upgrade to SilverFast Ai Studio at any time but this comes at a price, literally. 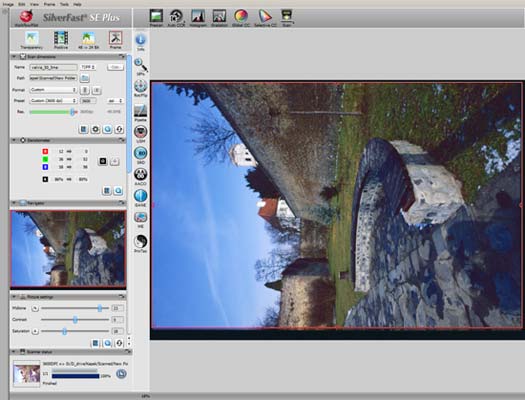 SilverFast allows users to select a number of options and modify a legion of settings. Most importantly, you can set the scan resolution, specify the type of film you are scanning (negative or positive, with Kodachrome being a separate option due to the special characteristics of that emulsion), select the scan area, specify the output file type and destination folder, pick a neutral grey point, make global and selective colour corrections and curves adjustments, and more. 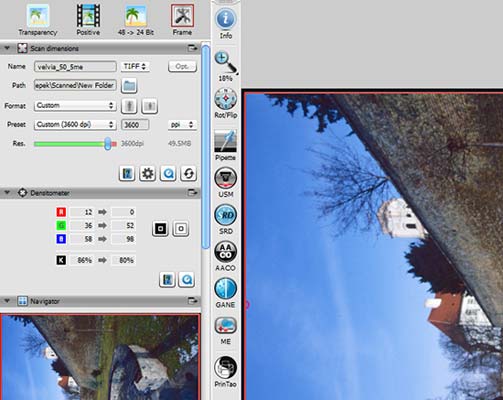 These settings panels and tools are all found in the scrollable left pane within the main SilverFast window. Unused tools are usually collapsed but accessible, though some tend to disappear altogether requiring you to open them again from the menu. The most important tools have their own buttons, arranged in a vertical row to the left of the preview window.

LaserSoft is heavily touting its new “WorkflowPilot” wizard, which has taken the place of the “ScanPilot” found in the program's earlier versions, but I have personally found it too limiting (e.g. with the WorkflowPilot enabled, you can no longer set the input resolution in dots per inch), so I switched it off and went with manual settings instead.

SilverFast has a number of interesting tools that are worth being mentioned. One of the handiest is called NegaFix. Negative films are not simply the inverse of positive film - they all have an orange mask, which needs to be filtered out in order to get the colours right. To make matters more complicated, every type of negative film has its own version of this orange mask, giving you no one-size-fits-all solution to this problem. This is where NegaFix comes in: it stores profiles for a legion of print films, so if you intend to scan one that's included in its database, chances are you can get over the colour issue quickly and easily – though truth be told the results are not always consistent and some profiles are less successful than others (e.g. the Kodak Ektar 100 profile almost always produces results that are way too warm out of the box).

Not having an infrared channel, the Plustek OpticFilm 8100 cannot take advantage of SilverFast's excellent iSRD (infrared Smart Removal of Defect) feature – but luckily, LaserSoft has developed a software-based version, simply called SRD. Instead of using information from an infrared scan,  SRD tries to detect dust marks and scratches based on their colour. Obviously, this is a less effective solution but it works better than I expected. Consider the following crop of a rather dirty frame of Kodak Portra 400: 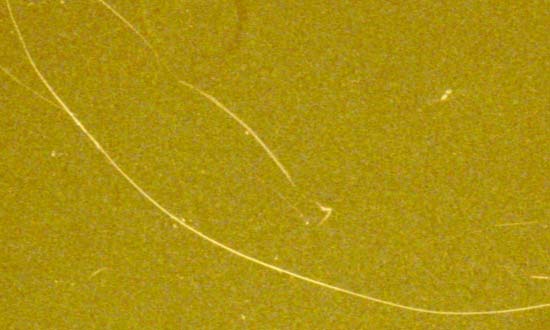 Pretty bad, isn't it? Now let's see how many of those defects were detected and marked for removal by the SRD tool: 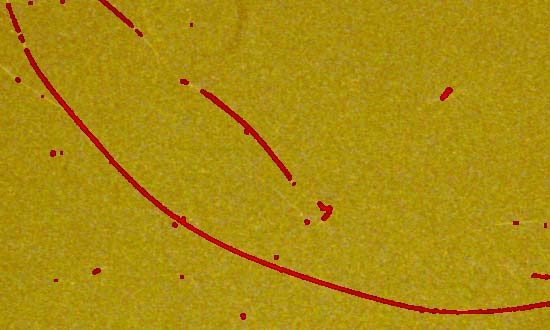 Not too bad. There are some scratches that went unnoticed but overall, the program managed to find most defects. 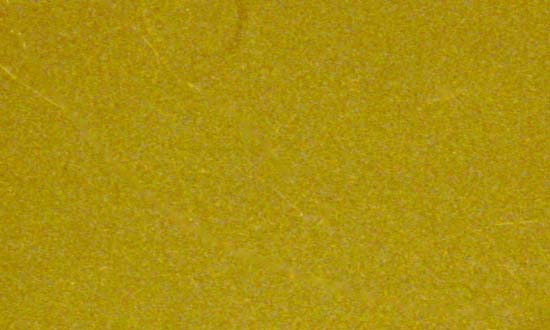 This is the cleaned-up version. Not perfect but a lot better than the original. It has to be said though that SRD can – and sometimes does – wreak havoc with fine detail, which is why I finally decided not to use it too often. As they say, your mileage may vary.

Another interesting SilverFast tool is called GANE (Grain And Noise Elimination). On paper, this feature allows the program to produce cleaner-looking scans. We've tried it out on another frame of Kodak Portra 400.

GANE has three settings, Low, Medium and Strong. Shown above is the effect of the Strong setting. The result is a smoother but also softer-looking image – apparently, this feature sounds better than it really is.