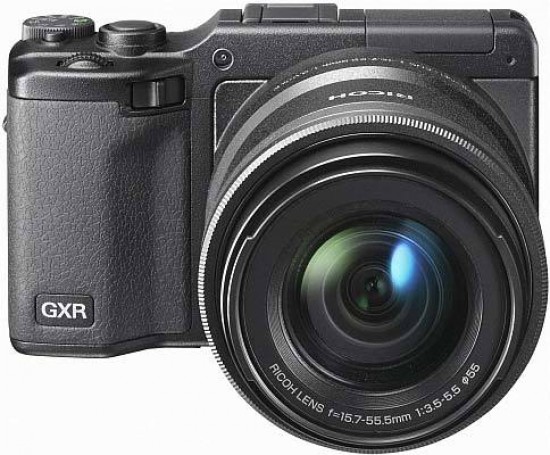 The Ricoh A16 24-85mm is the latest camera unit for the Ricoh GXR camera system, which combines the lens and sensor into a single interchangeable unit. The new A16 24-85mm module combines a 24-85mm lens f3.5-5.5 with a 9-group, 11-element configuration and a 16 megapixel APS-C CMOS image sensor. It simply slides into and out of the front of the GXR body, with virtually all of the features of the camera body available for any of the five units that are now available. The Ricoh GXR A16 24-85mm module additionally offers an ISO range of 100-3200, Smooth Imaging Engine IV processor, dynamic range compensation, ISO bracketing, an improved two-axis electronic level gauge and two different manual focusing aids. The Ricoh GXR A16 24-85mm camera unit costs £449.99 / $599.

With the A16 24-85mm camera unit fitted, the Ricoh GXR weighs 550g and measures 113.9 mm × 74.7 mm × 98.5 mm, including the the battery and memory card. The camera body measures just over 3.5cm in depth, with the lens extending by almost 12cms from the front of the camera unit when set to full telephoto, rather dwarfing the GXR body.

The A16 unit has a 16 APS-C image sensor and a 24-85mm lens f3.5-5.5 zoom lens. This is a unique offering in the Ricoh range and is the third Ricoh camera module to feature the same-sized sensor that the majority of DSLRs use. When the GXR is fitted with this unit, it's automatically in the same league as a DSLR or the other compact or mirrorless cameras that have an APS-C sensor, like the Sony NEX range, Samsung NX cameras and the Pentax K-01. In theory the GXR with the A16 unit should deliver better image quality than the likes of the Micro Four Thirds ranges from Panasonic and Olympus, the Nikon 1 system, and the Pentax Q.

The 24-85mm lens provides a focal range that is comparable to a lot of DSLR kit zooms, with the maximum apertures of f3.5 at 24mm wide-angle and f5.5 at 85mm telephoto also being very similar. Other than a detachable filter ring, the A16 24-85mm has no controls at all, including zoom and rings, instead relying on the thumb-operated zoom buttons and the camera body's external buttons and LCD screen instead. With the 3.5x lens taking around 3 seconds to zoom from 24mm to 85mm, this makes the operation very slow and much more awkward in comparison to a DSLR standard zoom lens.

The GXR A16 24-85mm is the third Ricoh GXR camera unit to offer HD video recording. There are three movie sizes available - 1280x720, 640x480 and 320x240 pixels - all at 24 frames per second and all saved in the AVI file format, which unfortunately does result in some rather large file sizes. Sound recording is mono only, and there are no advanced features like Windcut or Pause / Restart as seen on other cameras, so Ricoh still have some work to do in this area.

If you don't like composing your photos by holding the camera at arms length and looking at the LCD screen, there's also another way of framing your shots. You can additionally buy the completely removable optical viewfinder, the VF-2, which we'd particularly recommend for the A16 24-85mm camera unit. This slots into the hot-shoe on top of the camera, allowing you to hold the camera up to your eye and instantly giving the GXR the feel of a single-lens reflex camera.

The start-up time from turning the Ricoh GXR A16 24-85mm on to being ready to take a photo is fairly responsive at around 2 seconds. Focusing with the 24-85mm camera unit is quite quick in good light, taking around 0.5 second, and the camera happily achieves focus most of the time indoors or in low-light situations. It takes about 0.5 second to store a JPEG image, allowing you to keep shooting as they are being recorded onto the memory card, and there is virtually no LCD blackout between each image.

Shooting in RAW mode is also very quick, with the GXR only taking around 1 second to store a RAW image. In the fastest Continuous mode the camera shoots at 2.5 frames per second but only for 3 RAW images (if noise reduction is turned off), taking a further 5 seconds to record the images before you can take another picture. For JPEGs, in single shot mode image are recorded instantaneously, and in Continuous mode the A16 24-85mm shoots at the same 2.5fps rate as RAW files but for up to 14 images.

The Ricoh GXR A16 24-85mm has a number of unique features that other GXR camera units don't offer. In addition to a useful spot focusing mode, clever peaking function during manual focusing which outlines the in-focus areas in colour, and an electronic level for image composition, the A16 has a new Dynamic Range Compensation option. This increases the detail in the shadows and highlights, with three different strengths available.

There are also five new creative scene modes including high contrast black and white, miniaturize and toy camera, the ability to bracket the ISO speed, shoot only in RAW mode with no accompanying JPEG, and display over-saturated areas of the image during playback. Finally, if you continue to half-press the shutter button between shots, the focus, white balance, and exposure values are all maintained, useful for shooting under a constant light source, for example in a studio.

Now that we've discussed the new features that the A16 24-85mm brings to the Ricoh GXR system, let's take a look at its image quality.