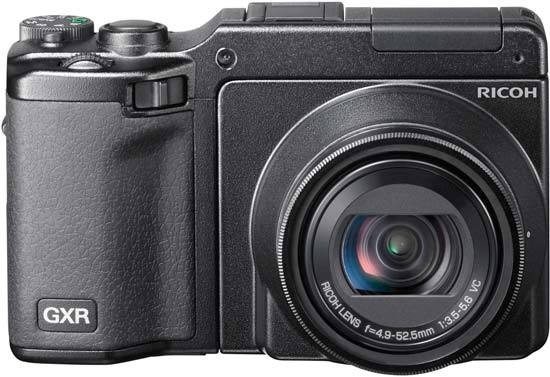 The Ricoh P10 is the third lens-sensor module for the revolutionary Ricoh GXR camera system, which combines the lens and sensor into a single interchangeable unit. The new P10 unit combines a 10.7x, 28-300mm f/3.5-5.6 lens with a 10 megapixel 1/2.3-inch back-illuminated CMOS image sensor. It simply slides into and out of the front of the GXR body, with virtually all of the features of the camera body available for any of the three units that are now available. The Ricoh GXR P10 has a Vibration Correction function that helps to combat image blur resulting from camera shake and it can take 5 RAW images in just one second. There's also macro shooting available at a close-focus point of 1cm, a dynamic range double shot mode and 1280×720 pixel HD movies. The Ricoh GXR P10 camera unit costs £249.99 / $299 or as a kit with the GXR body for £499 / $499.

With the P10 camera unit fitted, the Ricoh GXR weighs 367g and measures 113.9 x 70.2 x 49.8mm (although still not including the the battery or memory card), making it the smallest and lightest GXR combination currently on the market. When the lens is fully extended, the camera measures over 10cm in depth, but thankfully it retracts back to 6cms when it is turned off. The 28-300mm range is very versatile, covering everything from wide-angle landscapes to close-up action photos. The maximum apertures are respectable enough at f/3.5 at wide-angle and f/5.6 at telephoto. Helpfully the zoom mechanism becomes quicker as you progress through the range, a neat feature that really cuts down on waiting for the camera to do your bidding. The effective sensor-shift Vibration Correction function is an almost compulsory addition given the telephoto focal range on offer.

The P10 incorporates a 10 megapixel 1/2.3-inch back-illuminated CMOS image sensor and a 28-300mm 10.7x zoom lens. This combination is strikingly similar to the Ricoh CX3 compact camera, which has exactly the same size sensor and type and the same zoom range. Even the maximum aperture range - f/3.5-5.6 - is identical! Disregarding any differences in image quality, it seems to us that the P10 is once again almost exactly replicating one of Ricoh's existing compacts in the GXR format, albeit in a larger size and perhaps more importantly with a much bigger price-tag when bought with the GXR body, as the CX3 retails for £299.

As with the S10 unit, I would have preferred to see the P10 use an APS-C sensor rather than the much smaller 1/2.3-inch sensor - if I'm going to use a larger camera than Ricoh's existing compacts, then I'd prefer a bigger sensor with all the image quality benefits that it hopefully provides. Replicating the core specifications, if not exactly the same components, of their existing compacts in the GXR system does provide a quick way to expand the number of units, but inevitably creates a lot of obvious overlap. As Ricoh release more units, this kind of dilemma may become less prevalent, but there's no disputing that this is an inherent limitation of their new system that DSLRs don't suffer from in quite the same way.

The Dynamic Range double shot mode is one of the Ricoh GXR P10's star attractions, taking advantage of the CMOS sensor to record images with much greater dynamic range than most compacts. When the Ricoh GXR P10 is in the DR scene mode it takes two images with different exposures, and then records a single image that combines the properly exposed parts of each one. There are four DR strengths - Very Weak, Weak, Medium and Strong - plus an Auto setting if you're unsure which is the best setting. You can also choose to take a DR and Normal image at the same time (both are saved to the memory card), useful for quickly comparing the effect. You can also select a Priority Range for each DR strength, with Off, Highlights and Shadows your choices - this allows the more advanced user to tip the balance in favour of the shadow or highlight areas.

In practice the Dynamic Range mode works really well, resulting in images that have noticeably more dynamic range that those shot in the Normal mode, and far surpassing most other compact cameras. If you want to shoot images that retain detail in both the highlight and shadow areas, then the Ricoh GXR P10 is a great choice. You can see the results of using the the different modes for yourself on the Image Quality page, with a side-by side comparison of the Normal and four different DR modes. There is one main drawback though; the DR images have noticeably less saturated colours than the Normal version, which more accurately matches the scene.

The GXR P10 is the first Ricoh GXR camera unit to offer HD video recording, the must-have feature of 2010. There are three movie sizes available - 1280x720, 640x480 and 320x240 pixels - all at 30 frames per second and all saved in the AVI file format, which unfortunately does result in some rather large file sizes. Sound recording is mono only, and there are no advanced features like Windcut or Pause / Restart as seen on other cameras, so Ricoh still have some work to do in this area.

If you don't like composing your photos by holding the camera at arms length and looking at the LCD screen, there's also another way of framing your shots. You can additionally buy the completely removable optical viewfinder, the new VF-2, which we'd particularly recommend for the P10 camera unit. This slots into the hot-shoe on top of the camera, allowing you to hold the camera up to your eye and instantly giving the GXR the feel of a single-lens reflex camera. Vitally it also helps reduce camera shake at the longer telephoto settings that the P10 offers, as holding the camera up to your eye is much more steady than holding the camera at arm's length.

The start-up time from turning the Ricoh GXR P10 on to being ready to take a photo is responsive at around 1.5 seconds. Focusing with the 28-300mm camera unit is very quick in good light, taking less than 0.5 seconds, and the camera happily achieves focus most of the time indoors or in low-light situations. It takes about 0.5 second to store a JPEG image, allowing you to keep shooting as they are being recorded onto the memory card, and there is virtually no LCD blackout between each image.

Shooting in RAW mode is also very quick, with the GXR only taking around 1 second to store a RAW image. In the fastest Continuous mode the camera shoots at an amazing 5 frames per second for RAW images, or 4fps if noise reduction is turned on, taking a further 5 seconds to record the images before you can take another picture. This compares very well even to entry-level DSLRs. For JPEGs, in single shot mode image are recorded instantaneously, and in Continuous mode the P10 shoots at the same 5fps rate as RAW files but for an unlimited number of images.

Now that we've discussed the new features that the P10 brings to the Ricoh GXR system, let's take a look at its image quality.