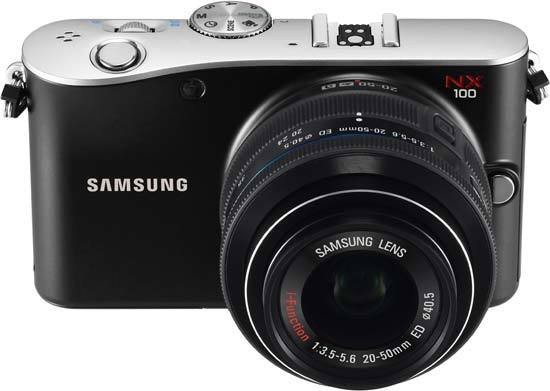 All of the sample images in this Review were taken using the 14.6 megapixel SuperFine JPEG setting, which gives an average image size of around 5.5Mb.

The Samsung NX100 produced images of excellent quality during the review period. The large 14.6 megapixel APS-C CMOS megapixel sensor used in the NX100 produces noise-free JPEG images at ISO 100-400, with ISO 800 also looking good. ISO 1600 only shows a little noise, while the fastest settings of ISO 3200 and 6400 are quite a lot noisier and suffer from softening of fine detail and a loss of saturation, but the images are still perfectly usable for small prints and resizing for web use. The NX100 does apply quite a lot of noise reduction to the JPEGs, as demonstrated by the RAW files which have more noise at the comparable high ISO settings. The night photograph was excellent, with the maximum shutter speed of 30 seconds and bulb mode of 8 minutes allowing you to capture plenty of light.

The images were a little soft straight out of the NX100 at the default sharpening setting and ideally require some further sharpening in an application like Adobe Photoshop, or you can change the in-camera setting for JPEG files. Colours were vibrant without being over-saturated in the default Standard Picture Wizard mode, and you can always choose Vivid if you want even more punch or one of the other seven presets to change the mood of your JPEG images, with three customisable settings alo available. Smart Range is quite a useful feature that increases visible detail in both highlight and shadow areas of the image, albeit at the expense of reducing the colour saturation a little.

There are 6 ISO settings available on the Samsung NX100. Here are some 100% crops which show the noise levels for each ISO setting, with JPEG on the left and RAW on the right.

The Samsung NX100 has 3 different JPEG image quality settings available, with SuperFine being the highest quality option, and you can also shoot in RAW format. Here are some 100% crops which show the quality of the various options, with the file size shown in brackets.

The Samsung NX100's maximum shutter speed is 30 seconds and there's also a Bulb setting of up to 8 minutes, which is great news if you're seriously interested in night photography. The shot below was taken using a shutter speed of 25 seconds at ISO 100. I've included a 100% crop of the image to show what the quality is like. The camera takes the same amount of time again to apply noise reduction, so for example at the 15 second setting the actual exposure takes 30 seconds.

Samsung's various Picture Wizard options are similar to Olympus' Picture Modes, Nikon's Picture Styles and Canon's Picture Controls, offering preset combinations of different sharpness, contrast, saturation and colour tone settings, all of which can be changed. The nine available Picture Controls are shown below in the following series, which demonstrates the differences. There are also three additional Custom styles so that you can create your own looks.

The Smart Range feature noticeably increases the visible detail in both shadow and highlight areas, as shown in the example below, although it does tend to wash-out the stronger colours in the process.