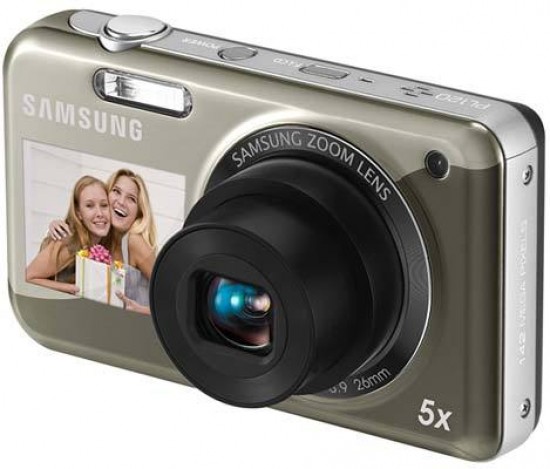 From a distance, the Samsung PL120 is an unassuming digital compact camera that could get lost amongst the swathes of other similar models on a shop shelf. Closer inspection, though, reveals some interesting features for a camera at this budget price point. Take, for example, the 14.2 megapixel CCD sensor, face recognition, 26mm wide-angle lens, 720p HD movies, special filter effects, digital frames and a small LCD monitor on the front of the PL120 for self portraits or pictures of the children. The Samsung PL120 is available in grey, purple and red priced at £149.99 / $149.99.

A few years ago, Samsung introduced a small screen onto the front of the camera to aid with self portraits and taking pictures of children. They've continued to use this exciting little innovation by adding it to the new PL120.

The specification of the Samsung PL120 is fairly typical of any other of this level. It sports a 14.2 megapixel 1/2.3 inch CCD, 5x optical zoom, 2.7 inch LCD screen and face recognition. Unusually, it doesn't have an optical image stabiliser, with Samsung preferring the digital variety instead. The design of the PL120 is a standard box rectangle and aside from the unusual slant when it's sat on a table, the design and layout is reminiscent of other digital compact cameras and certainly other Samsungs.

The usual buttons are all in place with the addition of the F. LCD button. This button is used to activate the 1.5 inch LCD screen on the front of the camera and pressing this button brings up four options. The first is simply to activate the front screen. The second option brings up the self shot mode which will use face detection while the third is used for photographing children.

When you use this mode, it brings up a cartoon sequence on the screen along with some funny sounds to make children smile and laugh. The final option is called jump shot. It counts down from 5 and then takes two photographs in succession. It's not a quick burst mode, it actually takes the pictures slowly. In fact, we struggled to think of an occasion when you would need to use it other than to make small two frame animations or simply to get a safe shot.

On the back of the Samsung PL120 next to the 2.7 inch LCD screen are several buttons which make the camera look busy. A small, thumb operated zoom switch sits at the top with four direct buttons surrounding the navigation pad. The curved edges feel nice when the Samsung PL120 is being held and without it being weighty, it still feels solid. Start up time is fast, smooth and the lens displays only the expected amount of play when it's moved.

On the bottom of the camera is a plastic tripod bush and the battery door. The Samsung PL120 takes a dedicated lithium ion battery and next to this sits the memory card. Not an SD card as you'd expect, but in fact a MicroSD card of those found in (Samsung) mobile phones. Adapters can be bought for these cards that convert it to a normal sized SD card for use in a card reader or even another SD compatible camera.

The Samsung PL120 is relatively smooth with only a few bumps here and there to accommodate the lens, screen and shutter release button. All other areas flow into each other making the camera pleasing to hold.

There are 3 menus on the PL120. The main menu is accessed quite appropriately by pressing the menu button. It brings up the standard Samsung menu screen with the main options tabbed to the left and the sub sections to the right. Pressing right or the ok button will take you into the sub menu of whichever tab you're on. It's easy to understand and make your way around without getting lost or changing modes and settings you don't think you should've changed.

Next to the menu button is the mode button. Pressing this takes you into the mode menu and has 4 options to choose from. Smart auto is Samsung's version of the intelligent auto modes that are popping up on all cameras at the moment. It works by analysing the scene, working out the correct mode then enabling it on the camera. For example, if you have a person in the shot, it will see the person's face, put the camera in portrait mode, switch on auto flash with red-eye and  face detection.

Finally the function menu is a fast access menu for all your most used features such as resolution, ISO, white balance and face detection. It's also in this place that you'll find all the cool little effects filters that we're going to look at next.

Like intelligent auto modes, filter effects are also cropping up on cameras these days and the PL120 is no exception. There are ten options to choose from such as miniature, fish eye, defog, retro, negative and custom RGB, but the more interesting ones are new. They're called half tone dot and sketch. With the sketch filter, imagine an A-Ha video and you get the idea of what the end result looks like. The half tone dot filter gives the same effect as a newspaper photograph looks when viewed under a magnifying glass.

In the Samsung PL120's playback menu, there's still plenty to do. You can edit the pictures easily because the camera allows you to resize, rotate, add a smart filter or adjust the image which is a sub menu within a sub menu. In this menu, you can remove red-eye, smooth skin and add contrast, brightness, saturation and even noise. It's a great idea for anyone using the camera that doesn't have or understand Photoshop but it's nowhere near as precise. The thing we like most about the editing though is that it's non-destructive. What that means is that it doesn't lay the new editing over the existing picture, it creates a copy so if you change your mind and don't like it, you've not lost anything.

Considering it's a simple point and shoot camera, the Samsung PL120 certainly does quite a lot. We've always liked the idea of the front monitor for self portraits and the use of cartoons to make children smile is inspired. Despite the basic look of the camera, it's pretty to look at and the functions are easy enough to use even though there are too many on the back.

Compared to some cameras, the PL120 looks cluttered but it has no more on it than other digital compact cameras in the same price point a year ago or so. It does nothing innovative, there's no new miracle feature and it doesn't have a fashionable new design. It's a camera that panders to the type of person that simply needs something to take pictures with. The 5x optical zoom will cope with most situations that a typical day out or holiday will ask of it.

In the box comes the standard equipment consisting of a driver CD, quick start manual, battery, wrist strap and battery charger. The great thing about the charger is that the cable unplugs from the main unit and doubles up as the USB cable. You can also charge the Samsung PL120 directly from a computer.