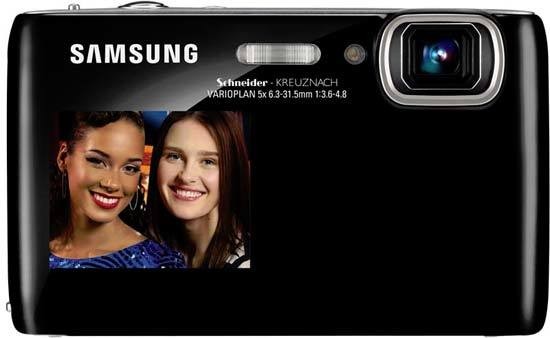 The Samsung ST100 is a 14 megapixel point and shoot camera with a unique twist - it has a 1.8 inch LCD screen on the front which makes it easier to take self-portrait pictures. In addition to this innovative feature, the Dual View ST100 offers a 3.5 inch, 1,152k touch-screen LCD with built-in Haptic vibration effect for extra feedback and a Smart Gesture user interface with built-in Acceleration Sensor that responds to finger commands. The ST100 also has a 5x optical inner zoom lens with a focal range of 35-175mm, Smart Auto mode which automatically chooses from 16 different settings ranging from landscape to portrait, and 720p video recording at 30fps. The Samsung ST100 is available for $349.99 / £299.

Why put up with just the one when everything goes better with two? We're talking LCD screens. The latest glossy addition to Samsung's burgeoning range of so far unique '2View' cameras, coming after the ST500 and ST600, the 14.2 megapixel ST100 features not only a comparatively huge 3.5-inch, high resolution 1152k dot resolution version with a widescreen aspect ratio at the back, but additionally a small 4:3 ratio 1.8-inch screen at the front.

It's the same size and ratio of LCD we were used to finding adorning the rear of digital cameras at the dawn of the millennium. The second smaller screen is not only potentially useful for lining up self-portraits with greater accuracy, by displaying the image before the lens or a cutesy animation it could also distract never-stay-still pets and kids long enough for you to get that quick snap. Other key spec includes High Definition video capture - here the usual 1280x720 pixels at 30 frames per second (with additional 15fps option) - plus a broader than average light sensitivity range stretching from ISO80 to ISO3200, should you want to risk low light shooting without flash.

Face Detection can now detect up to 20 faces in the one frame and once again we have the Samsung regulars of colour adjusting Photo Style Selector modes and digital effects courtesy of its Smart Filters options. The regulars of the tilt and shift lens ape-ing Miniature and perspective warping Fisheye are here, alongside defog and sketch options. Apply these and a new image is created and saved alongside your original. Once again while they probably won't influence your purchase decision one way or the other, they're fun extras.

The ST100 is further newsworthy for being Samsung's first dual view camera to feature an internally folded zoom lens - here a 5x optical variety equivalent to 35-175mm in 35mm film terms - that at no point protrudes from the body. This helps to maintain clean design lines and compact proportions at all times. Indeed the camera rather closely resembles the waterproof WP10 from the same maker's range, whilst lacking its moisture resistance. With a UK asking price around the £300 mark however, the ST100 is priced at a premium. It's towards the top end of what we'd expect to pay for a snapshot camera - albeit one without the extra screen. And that said we just get the standard quick start manual in the camera box, with the full manual less usefully included on CD only.

Paring things down to the essentials, no separate charger is provided with this Samsung as its battery is charged in-camera. One end of a short USB cable plugs into an unprotected port at the camera's base, the other end into a provided mains plug, or directly into a vacant USB port on your laptop for main-free recharging. Whilst that offers some convenience and saves on long snaking cabling, it also means that even if investing in a spare battery the camera is tied up every time you need to re-charge it.

It's also worth mentioning that the camera's large backscreen swallows up all the real estate at the ST100's rear, edging out any physical buttons whatsoever, except for a dedicated playback control that sits half atop the screen surround and half atop the top plate proper. Good to have this for one-touch playback rather than having to otherwise locate a dedicated playback mode from among the screen icons. The 3.5-inch screen is large for a reason as it offers touch panel operation - so there's plenty of space for jabbing fingers this way and that, the trade off being that there's nothing resembling a grip at the back, nor front of this camera.

Like the WP10 its glossy surface means that it's tricky to hold this one rock steady and avoid camera shake, despite built in optical (and digital) image stabilization. Also, as the fingers of your right hand snake around its front searching for something to grip, they part obscure the front LCD, which is ranged toward the left hand edge if looking at the ST100 lens on. So, as usual, this isn't a camera without certain compromises, even if Samsung has furnished this camera with its slightly backwards-slanting design - the lens therefore pointing marginally skywards - which it claims makes for a natural shooting angle.

For those looking for an unobtrusive, lightweight point and shoot for occasional use however it will fit neatly into any pocket or purse. Dimensions are 100x60x20mm and it weighs a manageable 135g without battery or card - here, typically of Samsung's latest batch of compacts, compatibility is offered with the less well-loved microSD only, and up to 2GB at that. And, although the outer construction may be mostly plastic - where competitors offer a greater degree of visible metal at this price - the ST100 feels reasonably sturdy - at least strong enough to withstand the odd knock and drop (though it isn't shockproof).

From the front the ST100 would look fairly plain if it weren't for that screen tucked into the left hand corner, blending in with the all-black bodywork of our review sample very well. The lens sits top right of the faceplate where it would be prey to stray fingertips obscuring the lens if it weren't for a slightly raised lens surround that, deliberately or otherwise, your fingers gently butt up against should they come too close. Alongside this is a small porthole housing the AF assist/self timer lamp, and next to this again we find a narrow lozenge-shaped flash.

The ST100's slender strip of a top plate most prominently features its shutter release button, which has a smaller power button inset alongside, next to which is a dedicated button for switching the front LCD on or off - though it can also be brought into play with a couple of finger taps direct to the screen. Unusually for a compact camera these days, a rocker switch for operating the zoom lens sits adjacent to the shutter release at the right hand edge of the top plate rather than ergonomically encircling it; not that in practice this makes much of a difference at all in terms of speed and user friendliness. Both built-in microphone and speaker are also incorporated into the top strip, not that this should concern any aspect of the Samsung's operation.

Press the power button and the camera readies itself for the first shot in just over a second - a commendably swift response given the ST100's humble point and shoot status. Nudge the zoom lever next to it and the camera takes around three seconds to travel slowly yet surely from maximum wideangle to extreme telephoto. The optical zoom is quieter than most in operation - you have to press your ear to the camera to actually hear anything - with the result that it can be deployed when shooting video clips, which isn't always the case with competing compacts in its class.

With the camera ready for action the user has the choice of seven shooting modes, including two video options, selected via an icon located top left of the screen. Incidentally, if shooting in regular 4:3 mode, black bands crop the otherwise 16:9 ratio LCD left and right, and it's on these borders that the icons mostly sit. Opt to shoot widescreen format however video and said crop naturally disappears to provide access to the screen's full width. Furthermore, should the 'hide info' mode have been previously selected, with a half press of the shutter button the icons disappear from the screen edges to present a clear view. A subsequent tap of the screen retrieves them from the void.

Tap the shooting mode icon - denoted by the familiar stills camera shape, or movie camera if you have previously selected the latter instead - and a virtual mode wheel of choices is presented centre of screen, overlaying the image so photographers can still see their intended subject through it. It's here we find not only Samsung's scene and subject recognizing Smart Auto option, but regular auto mode and program option as well. Moving round the dial we are also given a dedicated dual anti shake option, standard video mode and Smart Auto video mode. Select an option and the virtual shooting dial disappears, your choice displayed top left of screen.

So far so intuitive, with response times nigh instantaneous and so it continues. A half press of the shutter button and focus/exposure is determined after the briefest of pauses whilst the camera adjusts, AF point/s highlighted in green with the usual beep of affirmation that the user is ready to depress the button fully and take their shot. Do so, and a full resolution, Super Fine quality JPEG is committed to memory in a couple of seconds, the screen briefly blacking out and displaying a frozen version of your shot before returning to real time image relay.

Tap the screen in one of the shooting modes and in addition to the relevant shooting mode icon we also get one tap access to flash options, focus options (normal AF or macro AF), self timer options (two seconds, ten seconds etc), and the aforementioned ability to hide the display information, or not. In addition, in auto and program shooting modes a tap of the bottom centre of the screen reveals a toolbar from which further operational functions are selected. It's here we find the Photo Style Selector options, with the likes of vivid or cool colours selectable, as well as ISO, white balance, multi zone or centre-weighted AF, exposure compensation (+/- 2EV) and their ilk.

A 'menu' button lurks in the bottom right hand of the screen. Press this and we're presented with four further folders of options for, from the top, camera functions, sound adjustments, screen adjustments and finally, regular set up menu options, such as the ability to format the card in use or reset all settings. The camera functions options within menu are the same as those presented along the bottom of the screen as previously mentioned.

The left and right hand flanks of the camera are devoid of any controls or ports whatsoever, with only a small lug for attaching a wrist strap tucked near the base at one side. The base of the camera is where we find the uncovered output connection that hooks up to the USB/recharging cable, nuzzling next to an off-centre screw thread for attaching a tripod. As usual the battery compartment is shared with that for a microSD card. We found ourselves having to recharge the provided battery every other day, so you'll want to have some means of doing so when you're in transit.

So, while the Samsung's touch screen operation is quick and responsive and its dual screen setup works well - if you don't forget all about the one at the front, as we occasionally did - the feature set here is pretty much that of your £150-£199 point and shoot camera. Will the pictures it produces therefore justify the extra spend? Read on to find out…