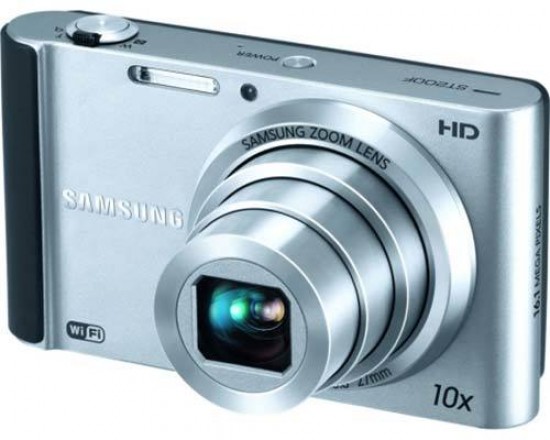 Designed for performance over looks, the Samsung ST200F has simple styling with sharp edges. The lens looks as though it's been superglued on to the front. The size isn't a problem, after all you have to house that 10x optical zoom somehow. The right side juts out slightly to provide a hand grip when shooting or holding it in between shots.

The top of the camera is nice and smooth and gives a hint of minimalism which is a little refreshing as a lot of compacts still have bits sticking out here and there. The zoom rocker is rarely redesigned so it's good to see one that suits the styling of the camera.

The class that the Samsung ST200F falls into is shown on the back because the rear plate of the camera is a textured plastic which looks and feels cheap. In fact its only saving grace is that it's colour coded to the rest of the body, which makes it look a little more attractive. On the back, the large 3 inch hVGA screen takes up most of the space. According to Samsung, the hVGA screen is better quality to the QVGA screen. The higher pixel rating of 460,000 dots will certainly help that. Samsung do make very good screens, anyway.

A simple layout of buttons is situated next to the screen. It follows the traditional pattern of a large navigation ring surrounded by four smaller control buttons. Each has a task and some have two. The bottom two buttons are allocated to playback functions; in particular delete and playback. The top right button serves as access to the main menu which is where you need to go if you want to make any adjustments to exposure, white-balance or ISO.

The top left button that has a house icon opens up the mode menu. This allows you to choose the mode, feature or effect you'd like to use – and there are plenty. The menu is split into five sections: Basic, Wi-Fi, Scene, Magic and Album. These sections offer a number of modes within them. In Basic, there's the simple shooting modes such as Smart Auto, Program, Smart Movie, Movie, Scene, Live Panorama and Settings.

Wi-Fi is for connectivity options such as Mobile Link for transferring images from the camera to a smart phone, Remote Viewfinder which will show you previews of images on your smart phone and allows you to capture pictures remotely, Social Sharing for uploading pictures to websites, Email, Cloud, Auto Backup for transferring images to a computer and TV Link for playing back images on a TV. The latter option requires the TV to be connected to the router you're using the Wi-Fi through.

Scenes are found in the Basic section but some are also separated into the dedicated Scene section. These are more specialist such as Picture in Picture, Beauty Shot and Intelligent Portrait. However, Night Shot and Close Up are also present which are much more commonplace. The most interesting tab is the Magic section. This houses the Magic Frame, Funny Face, Photo & Movie filters, Split Shot, Artistic Brush and Motion Photo modes. Magic Frame places an artistic frame around the subject putting them onto a magazine or as a face in the Moon.

Funny Face uses a warp tool to move a face around in the frame. The mode is intelligent enough to recognise a face in the picture and automatically adjust it depending on the warp option chosen. Split Shot does exactly what it says by taking a picture of the left half of the screen first and the right side after. Artistic Brush adds brush effects such as Sketch, Cartoon or Ink Painting effects to the picture. On the screen they look strong and garish so we'll have to test them and see how they look after the picture has been taken.

All these options pale into insignificance beside the Motion Photo mode. It's based on the growing Cinemagraph craze that recently came to light and is gathering pace as a new way of taking pictures. It even has its own iPhone app. With a DSLR, you take a photograph and some video of the same scene with some movement in it. With the ST200F, the camera takes a series of pictures at high speed. You select the area of motion you want by manoeuvring the box and making it bigger or smaller with the zoom ring. You then only have a portion of the picture moving while the rest is frozen. Done properly it looks great.

The downside is that they're in a very low resolution; 300,000 pixels (VGA) to be precise. Saying that, how big do you need them, really? They're only viewed on a screen online or TV and they're no bigger than 2 megapixel in resolution.

Another cool feature is the Wireless Remote feature. You can download a free app onto your smartphone (works with Galaxy models best) and you can shoot remotely from your phone. The phone and camera link up so that the screen is shown on your phone. You can zoom, set the flash, add a self-timer and adjust the resolution. There's a second or so delay and the zoom feature isn't very responsive. Pictures are saved to the camera memory card, not the phone so if you want them on the latter, you'll have to transfer them later.

If the price is to be believed then the Samsung ST200F is at the lower end of the spectrum but it feels really well made. The screen is flush with the body which almost never happens at this price tag. The battery door is sturdy with metal backing to increase its rigidity. It barely moves when manipulated. Even the USB port has a snazzy flip type door to protect it. The camera takes MicroSD which is a lesser used format but means the camera and Samsung phones are interchangeable with their cards. Keeping in line with this interchangeability, the USB connection is also the same as the Samsung phones so if you have a phone and camera, you can use the same charger.

From the turned off position, the ST200F can start, focus and take a picture in just under 2.5 seconds. In burst mode, we managed to capture seven pictures in the 10 second period. There was no sudden pulse of pictures before a slow down, the camera simply plodded along. There's an option called Stop Motion which is a term given to a certain type of animation that uses real props to create an animation such as Tony Hart's Morph or the AT-AT machines in Empire Strikes Back.

In playback, the pictures can be scrolled through in the usual fashions; ie, full screen or zooming out to create a thumbnail gallery (this can be done twice to show 12 thumbnails or 24 thumbnails per page). Pressing the Disp. Button will bring up a small box with the shooting information in it such as ISO, aperture, shutter speed, flash status, resolution and date. This is useful if you're thinking of taking up photography as a hobby. As you upgrade your camera and get more options open to you, this information will help you understand how a digital camera responds to light and scenarios.

Diving into the Samsung ST200F's menu, there are a few options that aren't normally seen. The usual options are there such as delete, protect and DPOF but the ST200F also has options to share via Wi-Fi, set the picture as a wallpaper and some basic editing options such as rotate and resize. There's also an intelligent portrait option which starts automatically and edits the picture to make it more pleasing to the eye. This includes cropping and rotating if necessary.

In the box, the Samsung ST200F comes presented the same way a smart phone does; in a small plastic tray sat over the accessories in the box below. In the box is a wrist strap, USB cable that connects to the charging plug. This means the camera will charge from computers which is useful for travellers. There's also a paper based quick start guide and a CD which holds the full manual, Adobe Reader, PC Auto Backup and Intelli-Studio which is Samsung's picture viewer/editor.