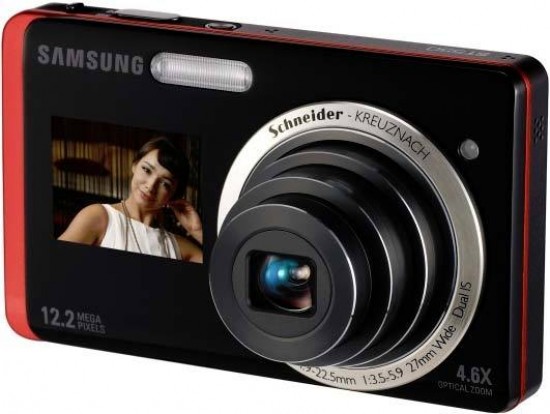 The Samsung ST550 (also known as the TL225) is a 12 megapixel point and shoot camera with a unique twist - it has a 1.5 inch LCD screen on the front which makes it easier to take self-portrait pictures. In addition to this World-first feature, the ST550 also offers a clever 3.5 inch, 1,152k touch-screen LCD with built-in Haptic vibration effect for extra feedback, a Smart Gesture user interface with built-in Acceleration Sensor that responds to finger commands, and a One Touch Auto Focus feature that allows you to focus on a specific part of the frame simply by touching the desired area. A 4.6x 27-124.2mm lens provides a versatile focal range, the Smart Auto mode automatically chooses from 16 different settings ranging from landscape to portrait, and 720p video recording at 30fps completes the headline specs. The Samsung ST550 / TL225 comes in black, gold, orange and purple priced at £299.99 / $349.99.

Constructed out of robust plastic with a glossy finish on the front and matt on the back, completed by shiny orange detailing on our serious black review model, the Samsung ST550 is a very stylish and quite slim compact camera. The 4.6x optical lens extends to provide a 27-124.2mm focal length, versatile enough for anything from wide-angle landscapes to candid head and shoulder portraits, although there are other similarly-sized models that offer a bigger zoom.

The lens dominates proceedings at the front of the ST550, taking up almost the full height of the face plate, with the built-in flash bulb shifted over to the left out of harm's way. On the right of the lens is a small porthole-style window for the AF assist/self timer lamp. There's no hand-grip at all on the glossy front of the ST550 or on the rear, which makes the camera more difficult to hold steady when shooting handheld at the extremities of the zoom.

Also positioned on the front of the camera is the headline-grabbing secondary LCD screen, which is 1.5 inches in size. Virtually un-noticeable when not in use, this provides an intuitive way of taking better self-portraits, either with your arm out-stretched holding the camera or mounted on a tripod. Being able to see a preview makes it easy to tell if you're going to cut the top of your head off, and the large self-timer countdown (if that feature is activated) also helps in the timing of that award-winning smile. Samsung have also added a range of "fun" effects via the special Children scene mode, aimed at attracting children's attention so that they look towards the camera, although there's only a handful of them, so they may get bored if over-used.

Looking down on the ST550's top plate we find 6 controls. Starting at the left when viewed from the rear, there are holes for the microphone, a Power button that's a little too small and recessed for easy operation, and a tactile shutter button. Next up is the rather plasticky but responsive rocker switch for operating the zoom. Controlled by a protruding lip that falls naturally under the forefinger, the zoom takes around three seconds to travel from maximum wide angle to full telephoto - which is pretty much par for the course for its focal range. We did find on occasion that the zoom took a moment or two to 'wake up' - and that its transitions are sound-tracked by a low mechanical blur - but it's low enough to avoid being off-putting. A small activity LED and the self-explanatory Play button complete the top of the ST550.

Once you've zoomed in and got your composition how you want, with a half press of the shutter button the Samsung ST550 is commendably swift to determine focus and exposure, the AF point highlighted in green and an operational 'beep' confirming you're good to go on and take the shot. Annoyingly there's no central AF point option, only Multi AF or One Touch Shooting, which as mentioned in the introduction allows you to interactively set the focus point by tapping the touchscreen LCD (more on that below). With little noticeable shutter lag, at highest resolution setting an image is committed to memory in just under two seconds, the screen blanking out briefly, which isn't bad at all.

The rear of the ST550 is dominated by the very large 3.5-inch LCD screen, which in the absence of an optical viewfinder is the only way of composing your images. The excellent LCD has a very high resolution of 1,152k dots, a real treat for the eyes during both image composition and playback. We didn't have too many problems viewing the ST550's screen in all but the brightest sunlight conditions.

The ST550 incorporates some very clever touch-screen technology, with virtually all of the camera's functions activated and controlled via its LCD. It offers the best interactive experience of any digital camera that we've reviewed, thanks to a winning combination of high-resolution, intuitive menu layout, and immediate feedback from the haptic sensor technology. As you touch the LCD screen, it emits a sound and more usefully vibrates, making it easy to tell if you've successfully performed an action, something that is often easier said than done on other touch-screen cameras. The sound can be turned on or off, and there are 3 levels of vibration on offer.

In addition, you can do certain things, like scroll through your images or delete a picture, simply by performing a specific gesture, although often it proved quicker just to press the appropriate on-screen icon. If you're especially lazy, the ST550's Smart Gesture feature goes even further by using the camera's built-in acceleration sensor to allow you to use gestures to perform certain actions. Flick the camera left or right to scroll through images, for example, or draw a cross to delete an image - although again it's usually quicker just to use the icons.

An ever-present icon in the top-left of the screen provides quick access to the shooting modes. On offer are the expected Auto and Program settings, plus Samsung's own 'Smart Auto' mode. As it sounds, this is the manufacturer's equivalent of the intelligent auto modes on competitors from Panasonic (its Lumix range), Sony (the latest T-series Cyber-shots) and Canon (Digital IXUS family). Namely you point the ST550 at a scene or subject that hopefully the camera recognizes, automatically adjusting its settings to deliver optimum results. This means that it's not necessary for the user to manually delve into scene modes to call up the likes of 'landscape' or 'flower'; the ST550's operation is merely a case of point and shoot.

There's also a 'Dual IS' mode, which offers both optical image stabilization and the ISO boosting digital variety. In terms of light sensitivity the Samsung ST550 offers a very respectable range, stretching from ISO 80 up to ISO 3200. We'll of course be examining how well it does at its higher settings in the 'Image Quality' section of our review. Samsung's 'Beauty Shot' mode, useful for both acne-d adolescents and those of us who have over-indulged by automatically retouching out spots and blemishes, is the first Scene mode. Spotlighting the ST550's intended audience as the family, Samsung clearly wants its users to have to spend as little time post-processing images as possible - if any. In addition to Beauty Shot, there are 12 other scene modes on offer.

Also useful is the omnipresent Function menu which can be quickly accessed by pressing the bottom of the LCD screen, which allows quick access to some of the ST550's key settings. As expected the amount of information and options accessed via a press of 'Fn' varies dependant on which shooting mode is selected. For example in regular auto mode the user merely has the ability to adjust image size and resolution. Choose program mode however and there's the ability to change the EV, choose metering modes, change from single shot to continuous capture, choose from the range of ISO settings, adjust white balance, set the photo style or turn the ubiquitous face detection mode on or off. Like its rivals, Samsung also allows user access to blink detection and smile shot in this mode.

Finally, the full menu of options can be opened via the Menu icon in the bottom-right corner. Depending on the particular mode that the user is in, an icon illustrated vertical list provides access to four menus - Functions, Sound, Display and Settings. These include the ability to tweak operational sounds, LCD display, plus access to a setting menu, enabling memory to be formatted or previously selected functions reset. The ST550 also has its very own Recycle Bin, with every deleted shot automatically stored in a temporary folder just in case you change your mind.

Although it hasn't got an 'HD' suffix in the model name, the Samsung ST550 nevertheless offers High Definition video clips, though at 1280x720 pixels rather than the Full HD 1920x1080. In what Samsung is claiming as a first for digital compacts in its class, these can be paused mid-recording then re-started. The user can therefore perform rudimentary 'editing' as they shoot, a clever idea that hasn't yet been picked-up by other manufacturers. Fortunately the full extent of the optical zoom is also accessible when shooting movies. The video mode provides the opportunity to either shoot at top resolution, a less memory hungry 640x480 pixels, or 320x240 pixels; choice dependant on intended use (whether playing back on an HDTV or merely posting on the Internet). Maximum frame rate at 1280x720 resolution is 30fps, with a reduced 15fps rate also selectable. Should users however plump for the very lowest picture quality, a faster frame rate of 60fps is selectable.

There are holes for the built-in speaker on the left hand side of the ST550 (if viewing from the rear), and a very small camera strap eyelet on the right side. On the bottom we find an included HDMI port for hooking the camera up to an HDTV. Increasingly common for DSLRs that also shoot movies, it's still a comparative rarity to find such on a digital compact, even if it does shoot HD video. The required HDMI cable is an optional extra though, so bear in mind if you're on a budget. The HDMI port also doubles up as the means of re-charging the camera, with the battery left in the camera itself, either from an electrical socket or or alternatively straight from a USB port connected to your computer. Also in the box is a quick-start guide as a hard copy, the full manual on CD ROM, plus a wrist strap.

Completing the bottom of the ST550 is a screw thread for attaching a tripod and alongside that a sliding cover for protecting the compartment that jointly houses the removable SD Micro media plus the provided battery. Battery life is good for approximately 200 shots from a full charge, but that's only if you don't use the secondary LCD screen, which then reduces it to less than 150 shots - you'll definitely need a second battery for day-trips. Equally annoying is the tiny SD Micro format, which makes sense in Samsung's extensive range of mobile phones, but not in a larger camera. It's much too easy to lose in a pocket or bag, requires investment in yet another format, doesn't offer as much capacity or speed as SD / SDHC, and also needs the supplied adapter to be used in most external memory card readers. There's also 55Mb of built-in storage, enough for a dozen photos.

The Samsung ST550 offers the best touchscreen interface that we've tried, plus a useful secondary LCD screen, although it does suffer from poor battery life.