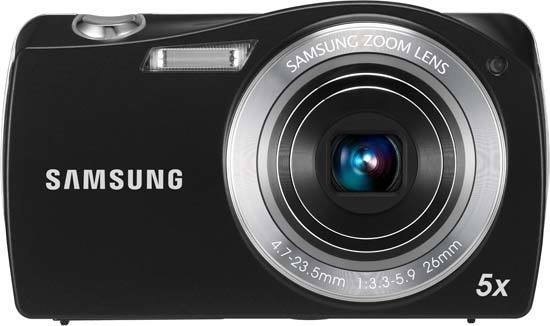 The Samsung ST6500 is an innovative 16.1 megapixel digital camera with a unique curved design and a 3 inch touch-screen LCD. Also on offer are a 5x optical zoom lens with dual image stabilisation, 720p HD video recording at 30 frames-per-second in the H.264 format, Smart Touch 3 user interface that responds to finger commands, wide range of special effects, and the intelligent Smart Auto feature which automatically adjusts the camera’s settings. The Samsung ST6500 is available in black, red or silver priced at £179.99 / $229.99.

In the past, cameras have been released with unusual designs and to add to that group is the Samsung ST6500. It's main rectangular base shape is that of any other digital compact camera, but the oversized lens barrel housing and the way the casing sweeps over the top like a wave gives it a fresh touch. The shutter release button is angled slightly and not a complete circle or it would hang over the back of the camera. It looks a bit incomplete but sits flush with the silver trim that lies around the circumference of the body making it part of the design.

For such a large lens barrel, the lens is annoyingly small. We would've liked to see Samsung take advantage and fit a big piece of glass to the front with a wide aperture to make it more appealing to a wider audience even if it's just because a large lens looks like it's a more professional camera.

On the back is the 3 inch touchscreen in the letterbox shape of a cinema screen. This is so that the menu buttons can occupy either side of the monitor without causing problems to the main picture. Next to the touchscreen are a few controls such as the zoom switch which is a spring loaded slider that we really like. It's not often you see one like that and it' a welcome decision.

Below the zoom are two buttons, one for playback and the other has a home symbol next to it. This brings up 8 options to access. They are Smart Auto, Program, Scene, Smart Movie, Movie, Photo Editor, Album and Settings. So it's essentially a command dial, without the dial.

That may seem pretty sparse for what is being tagged a “smart” camera and it's not until we noticed the small iPhone style pages at the bottom that we realised there was a lot more to see. Swiping our finger across the bottom of the screen took us to the next page where there were 8 more options for Vignetting, Beauty Shot, Magic Frame, Photo Filter, Movie Filter, Night, Palette Effect and Close Up. If that wasn't enough, there's a third page with a further 7 options such as Simple Shot, Object Highlight, 3D Album, Slide Show, Voice Recorder, Magazine and Dual IS.

So lots to do then. We've only scraped the surface of the test and – like an episode of Lost – we keep opening up more questions and prolonging the end. The camera sports a 5x optical zoom which starts at an impressive 26mm but an ultra wide-angle lens means you lose out on the top end and the ST6500 gets to 130mm in 35mm terms. The focal range is modest in compact terms as cameras evolve and with a short range like this, you shouldn't have to worry too much about camera shake but just in case, Samsung have added two image stabilising modes to the camera.

Diving into the menu system, there's lots to look at. The pages don't seem to be arranged in any sort of sensible order. A good idea would be to have the first page for shooting, the second for special effects and the third for playback and menu systems but there's an album creator on the first page and a 3D album and slide show on the third page.

It gives a feeling of confusion within the menu system but here's the best bit: just like an iPhone, if you don't like the way that it's arranged, you can rearrange the icons to your own preference. Simply hold your finger on the icons for around a second then drag them to the position you want them to be in. The screen is a bright, clean display with clear icons that make it easy to navigate should you decide to leave it alone.

There are some pretty cool features such as the photo editor and filters. The photo editor does what it says on the tin and allows simple editing to pictures you've already taken. After choosing the picture you want to edit, pressing the menu button will bring up some simple tasks such as contrast, saturation, face retouch and red-eye fix.

We think that the most intuitive option is the smart filter. Using this option means that if you take a picture and realise it would've looked better with a vignette, you can add it after which is a neat idea. Some features could benefit from an in-camera help system such as the palette effect mode. It applies simple colour tone changes to the video mode but that's not clear unless you download the user manual from the CD that's provided in the box .

We've tried other touch-screen cameras in the past and some of them have proved to be unreliable in terms of how sensitive the screen is. Not so with the Samsung ST6500 because although it's not as sensitive as smart phones, it's much more sensitive than a lot of cameras. We found on the whole that the menu system is intuitive although it does have its problems such as trying to scroll through the selections. Especially if you don't use the supplied touch pointer.

Start up time is great with the ST6500. The lens shoots out of the front like light speed (untested) and the image is on the screen and ready to shoot in under a second. Focusing can take around the same amount of time as a normal compact unless and we found that using macro, it sometimes found a distant item to focus on instead of the close-up subject.

With a metal exterior, the camera feels nice to hold. It has a solid feel to it including the lens barrel which doesn't have too much play in it. We never like to see plastic tripod bushes on cameras but it's to be expected on a camera at this level, so it can't be marked down because of it. We would mark the camera down on a flimsy battery door but it's actually nice, firm and even has a locking switch on it.

The battery and MicroSD card are placed in the same slot. That's right, Samsung cameras take a MicroSD card which is the ultra small memory card usually found in mobile phones. Samsung make phones, so maybe that's why they integrate similar technologies. There are adapters available and they usually come with the card. The adapters are SD sized so will fit into regular card readers and even other cameras. So apart from the unusual styling on the front, the camera looks just like a normal camera until you delve into the menu systems and find a camera more akin to smart phones with its finger swipe style layout and many interesting modes and features.