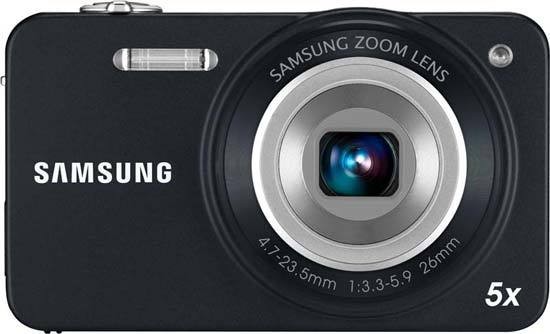 Ten years ago, hearing about a digital compact camera having 16 megapixels would have made us splutter into our Latte's but these days it seems to be the norm. Enter the Samsung ST90, a particularly tiny digital compact camera that's just 16.5mm front to back not including the lens. It also has a modest 5x optical zoom, 2.7 inch LCD screen and some quirky digital filters such as miniature effect, sketch effect and half tone dots. We'll take a look at those later in the review but let's look around the camera first.

The most noticeable part of the Samsung ST90 is the oversized lens barrel that overlaps the top plate of the camera. It's an unusual design feature and apart from breaking the typical design of a digital compact camera, we can't see any real reason behind it. It could've been a good opportunity to put a longer zoom lens in than the seemingly standard 5x optical. Obviously the depth of the camera is an issue but considering what other manufacturers, such as Pentax have been able to do in the past, it's possible and wouldn't need much more zoom to make it stand out.

On the top of the Samsung ST90, there's the usual shutter release button which has a zoom rocker wrapped around it. Next to that is the power button and Samsung have also included a smart button. This switches between the smart auto and whichever mode you were previously in. If you're unfamiliar with smart auto, it's Samsung's version of the intelligent automatic modes that are sprouting up on all the digital compacts these days. It's a feature that analyses the scene and selects the appropriate scene mode to cope with the results. For example, if you're taking a picture of a person, the camera will select portrait mode and switch on face detection.

At the back, the 2.7 inch LCD screen shares its space with several buttons. The top mode button accesses a small sub menu for choosing which mode you'd like to use such as smart auto, program, scenes and video. There are some unusual scene modes not normally seen on digital compact camera including magic frame and object highlight. The latter takes two photographs in succession. One is focused, the other is blurred. The camera then superimposes the focused subject and places it on top of the other image creating one picture with a better depth of field than a typical small sensor can provide.

The main menu uses the typical Samsung menu system of a black/blue background with white lettering. The shooting section will set itself up for whatever mode you're in. For example, if you're in the aforementioned object highlight mode, the shooting menu will give options for that mode. It's a good idea because it means if you're not into setting the white balance or adjusting ISO then this way of doing things will be a lot easier to understand.

If the menu system is too confusing for whatever reason, there's also a function button in the bottom right corner denoted by the letters fn. It brings up the same menu system you get if you press the menu button and go into the shooting section. It's a similar menu to the one found on Canon digital compact cameras and has always worked together.

The Samsung ST90 is a camera geared towards the happy snapper who simply needs a camera for days and nights out or holidays. That means that the camera has fun stuff to make picture taking more exciting. In the fn menu there's digital effects menu that applies different filters over the picture you're taking. You can choose from miniature, vignetting, half tone dot, sketch, fish eye, defog, classic, retro, negative and custom RGB.

The miniature filter blurs the bottom and top of the picture and keeps a thin strip of focused image in the centre. Using a high vantage point and shooting down on a scene gives it the impression that it's a model toy town. Usually, you'll find that the effects are the same across all cameras in the sam price bracket, regardless of make but we've not seen the half tone dot on any other manufacturer's cameras. It gives the pictures a dotted effect that you'd see if you put a magnifying glass over a newspaper black & white photograph. The other unusual effect is sketch which makes your pictures look like they've just stepped out of an A-Ha video.

There are plenty of focus aids to ensure that your pictures of family and friends come out as good as possible. On top of the standard face detection there's also an option for the camera to provide an audio response when it detects a face in the picture. There's a smile shot option which was originally developed by Sony and will automatically take a picture when the camera detects a smile in the frame. If someone blinks in the shot as can sometimes happen, the blink detection feature will take another shot straight away  to avoid people looking like they're asleep.

The Samsung ST90 also features a face recognition mode which allows you to register faces into an internal database, give them names and then the camera will prioritise those faces in the frame making sure they're focused and metered before any other.

Because of its positioning in the market, the Samsung ST90 has a half metal, half plastic build. The lens barrel is a nice shiny silver but we feel that the lens cover lets it down because it's that boring light grey plastic. All the buttons are firm and very responsive. The click is quite loud and it's the same noise that a computer keyboard makes when a key sticks.

While bendy and flexible, the battery door isn't too flimsy - we've seen worse. Inside the battery compartment is the rechargeable lithium ion battery and MicroSD card slot. Charging the battery is done in camera and the charger cable plugs into the HDMI slot. The cable also detaches from the plug and doubles up as the USB download cable. The camera will charge from a computer.