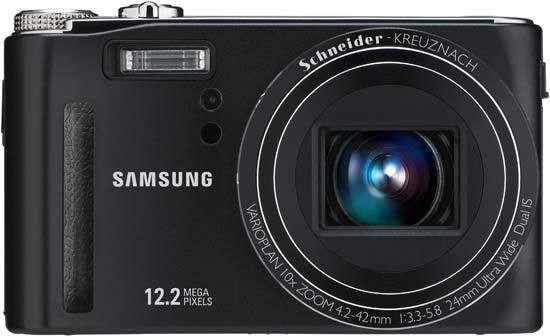 All of the sample images in this Review were taken using the 12 megapixel JPEG setting, which gives an average image size of around 3Mb.

Even when left on its normal default colour effect setting, the Samsung WB550 delivers warm, well-saturated images. Whilst this treatment is flattering for portraits, on occasion other subjects are rendered a tad 'hyper realistic', as if torn from the pages of a manga comic.

While the blues and greens of landscapes and the reds of flowers notably leap off the screen, pixel fringing is far more noticeable between areas of high contrast on the Samsung WB550 than on competing brands; here it's not so much purple as mauve and is evidenced without the user having to actually zoom in to check for it. Images therefore look quite obviously digital and 'processed' on close inspection.

When shooting at maximum wide angle there is some slight barrel distortion though not to an intolerable degree. The camera's built-in flash doesn't however quite match the breadth of the range at its extreme setting, and we ended up with darkened corners of the image as our test shots show.

In terms of low light shooting without flash, as noted the Samsung WB550 offers a broader ISO range than most, extending from a manually selectable ISO 80 up to ISO 3200. It seems Samsung was right to offer such, as the WB550's performance at ISO 3200 rivals that at ISO1600 from its point and shoot competitors. Even at ISO 800, though detail is slightly softening in the jump up from ISO 400, noise is kept well at bay. Not bad at all then.

Overall then the Samsung WB550 rewards users with a better performance than expected, even if we weren't quite satisfied with the flash and very obvious pixel fringing.

There are 7 ISO settings available on the Samsung WB550. Here are some 100% crops which show the noise levels for each ISO setting:

The Samsung WB550 suffered quite badly from chromatic aberrations during the review. Purple fringing was mainly present around the edges of objects in high-contrast situations, as shown in the examples below.

The Samsung WB550 offers a Macro setting that allows you to focus on a subject that is 5cms away from the camera when the lens is set to wide-angle. The first image shows how close you can get to the subject (in this case a compact flash card). The second image is a 100% crop.

The flash settings on the Samsung WB550 are Auto, Auto & Red-eye reduction, Fill-in flash, Slow sync, Flash off, and Red eye fix. These shots of a white coloured wall were taken at a distance of 1.5m.

The Samsung WB550's maximum shutter speed is 16 seconds in the Manual mode, which is great news if you're seriously interested in night photography. The shot below was taken using a shutter speed of 1 second at ISO 400. I've included a 100% crop of the image to show what the quality is like.