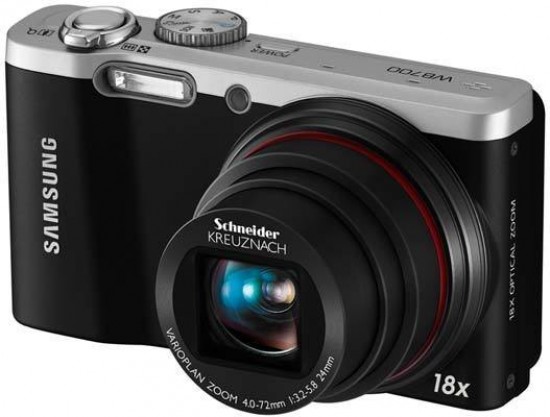 In the past, manufacturers that weren't seen as the most popular would generally offer more to entice the consumer to buy their cameras instead of the big names. If the Samsung WB700 is anything to go by, the world's largest electronics company is doing the same to entice buyers away from Panasonic's popular TZ series. Featuring an independently made Schneider lens, 18x optical zoom from a wide 24mm, manual controls, a 3 inch LCD screen, 720p HD video recording, an HDMI port for quick and easy playback on a High Definition TV set. and smart filters to keep you entertained, it certainly looks like a viable alternative. The Samsung WB700 is available in silver and black and officially retails $299.99 in the USA and £249.99 in the UK, but can now be found for around £140.

It's a fact that when Panasonic fit Leica lenses to their cameras, it's not Leica that actually make them. Panasonic make them to Leica specification under the careful eye of Leica technicians. This helps keep the cost down while still producing excellent quality optics. So how have Samsung managed to get a Schneider lens fitted to the WB700 which is actually made by Schneider while still keeping the cost so low? Well, Schneider aren't as well known but they have nearly 100 years of history with other popular names under their wing such as B+W filters and Rollei. This goes to show that while they may not have the same status as Leica or Carl Zeiss who work with Sony, they still provide good quality equipment that has even won them an Oscar.

The Schneider lens is at the front of a huge 18x optical zoom which is operated using the rocker switch wrapped around the shutter release. Joining the shutter release on the top plate is a command dial and a flush power button situated next to that.

On the back of the Samsung WB700 is a large, clear 3 inch TFT LCD screen with navigation controls to the right. We're happy to see a small dedicated video button right where the thumb rests so that video can be recorded straight away without having to work your way through a menu. As well as the usual buttons found on the back of Samsung compacts such as the menu and function button, there's the addition of a custom function button. It can be changed in the main menu and you get the choice between exposure compensation, ISO and white-balance.

The function (fn) button acts in the same way as many Canon digital compact cameras by bringing up a brief menu system with your most used options down the left side of the screen. Options such as resolution, image quality, ISO, white-balance, focusing, metering, smart filters and image stabilisation. The menu is attractive with a small circle around the mode you've selected so you can see it easier.

Diving into the main menu brings up a slick looking page with the main sections listed down the left side and the sub sections to the right. The options are clear, concise and ordered logically.

The Samsung WB700 is built to a very high standard. When it's switched on there's hardly any play in the lens. The size of it will be due to the large lens barrel needed for the 18x optical zoom but it also serves to give the camera a more expensive look. This is merely down to the consumer expecting a large camera to give much better results. The command dial on top of the camera moves easily through the selections without sticking and it seems that Samsung have managed to get the balance right of tenseness and fluidity in the dial so it doesn't slip out of the setting you've selected.

We like the flush screen on the back. It's clear, bright and makes picture taking a breeze. On the bottom of the camera is the memory card and battery bay. The battery is a rechargeable lithium ion type which is charged up through the camera just like the other Samsung cameras. It makes travelling easier because there's no massive charging unit to pack, just a plug and a USB cable. The cable can be disconnected from the plug and placed into a computer so the camera can charge off there too. This is useful for travelling photographers to upload their pictures directly onto a computer in an internet cafe and charge up the camera at the same time.

One surprise is the use of a standard size SD and SDHC card in the WB700. Other Samsung digital compact cameras use MicroSD because they're interchangeable with Samsung smart phones. We would have liked to see Samsung take this golden opportunity to make the camera SDXC capable but unfortunately it's not, which is a shame.

What we are impressed with is the metal tripod bush and the quality of the doors to the battery compartment and USB/HDMI ports. The battery door is really solid with a metal plate on the underside while the USB/HDMI area has a hard plastic flip up door to protect the ports against dirt and debris.

Overall the Samsung WB700 is pretty responsive. Start up time is a little under a second from pressing the power button to the camera being ready to take a shot. The zoom is less so with us having to twist the switch, let it go and twist it again before it started to zoom. This problem is even worse when zooming into pictures during playback. Another issue we uncovered is with the shutter release button. All AF cameras have a focus lock enabled by pressing the button halfway down. The WB700 we tested appeared to have an extra bit of resistance to it that we sometimes thought was the focus lock level. At those times, we thought the camera would focus but it didn't. On other occasions, we thought it was the problem bit so pushed down a bit harder and inadvertently took a photograph. This may have been our test unit so it's worth trying this out if you're in a shop looking to buy one.

Although the camera does hunt through the focal plane to find focus which is a contrast detection system, it's actually pretty fast. In fact, the performance of the WB700 in terms of system speed is very good. It's just a shame that it's all let down by the flash. Samsung say that the WB700 has a 4 second recycle time on the flash. It seems a lot longer and at times we'd focused and pushed the button down and had to wait for 6 or 7 seconds before it took a shot. Even with a full battery.

In playback, the camera will display the pictures with either no information, basic information which shows the picture number, shutter speed & aperture, battery level and type of memory that the picture has recorded to (internal or memory card).

The playback menu looks simple enough on the first section which has options for simple editing sequences such as resizing, rotating and adding a filter. The second section has the playback arrow repeated and is actually a slide-show option. There's a playback main menu section for deleting or protecting pictures along with the sound and display sections found in the recording menu.

Samsung have managed to reduce the amount of stuff that's in the box by putting the charger on the inside of the camera instead of taking the lithium ion battery out and putting it into a stand alone unit. This means all that you have is a plug for the mains and a cable. The cable can be taken out of the plug to reveal a USB socket which can then plug into a computer. The camera will then charge off a computer while downloading pictures onto it.

So Samsung have saved space on a charger and the USB lead. All that's left in the WB700's box is a wrist strap and the driver CD software which also has the user guide on it. A small booklet provides a quick start guide.