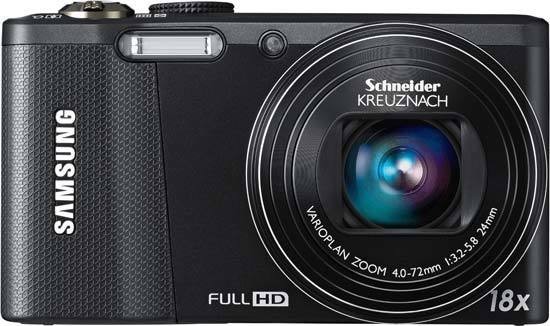 The Samsung WB750 is a 12.5 megapixel compact camera that utilises the company's own BSI CMOS sensor, a 18x, 24-432mm optically-stabilized lens and a 3 inch LCD screen. The WB750 travel-zoom also offers full 1080p HD video recording with a creative movie mode, simultaneous stills and video capture and an HDMI port, advanced A/S/M shooting modes for the more experienced user, auto modes for the beginner, 10fps burst shooting, Live Panorama mode, 3D photos, and a range of creative filters and effects. The Samsung WB750 is available now in black for £249 / $279.

First impressions of the Samsung WB750 are of a more refined and slimmer design than previous WB-models, with a depth of 25mm and weighing less than 200g. Constructed out of robust plastic in a sober all-black, the WB750 is small and light enough to carry in a trouser pocket or small camera bag. The WB prefix stands for 'Wide' and 'Big' - not necessarily the attributes you'd want attributed to a 'compact' - but here it actually refers to the lens reach, equivalent to an impressively versatile 24-432mm in 35mm terms, which should cover almost every subject that you'll encounter.

Although it hasn't got an 'HD' suffix in the model name, as indicated in our introduction the Samsung WB750 nevertheless offers Full 1080p High Definition video clips at 1920x1080 pixels at 30fps in the economical H.264 format. Videos can be paused mid-record and recording then re-started, so the user can therefore perform rudimentary 'editing' as they shoot. The full extent of the 18x optical zoom is accessible when shooting movies, and it's also possible to take a 10 megpixel still image whilst shooting a movie. The in-camera Creative Movie Maker allows you to combine stills and videos in a slide show complete with background music, although the available templates are a little cheesy and you can't create your own. There are also faster frame rates of 440fps and 250fps available, although only at tiny sizes of 224x160 and 368x272 pixels respectively.

As expected, the large lens dominates proceedings at the front of the WB750, its surround jutting out almost a centimeter even when the camera is inactive, suggesting Samsung could have found room for a lens thread for supplementary attachments. The lens takes up the full height of the face plate, meaning the built-in flash bulb is shifted over to the left out of harm's way. Alongside the flash is a small porthole-style window for the AF assist/self timer lamp. The WB750 has quite a nice textured hand-grip, with a slight outward curve in the camera body providing further purchase, making it easy to hold steady.

Looking down on the camera's top plate, we find a twin set of holes for the stereo sound recording system, and to the right is a small circular indented Power button. To the right, and 'sunk' slightly into the bodywork, is a familiar bottle top style dial for the shooting modes. This feels firm to the touch and well implemented, in that it rarely accidentally slips from one setting to the other.

Ranged around the dial are the usual Program setting and Samsung's own 'Smart Auto' mode. As it sounds, this is the manufacturer's equivalent of the intelligent auto modes on competitors from Panasonic (its Lumix range), Sony (the latest T-series Cyber-shots) and Canon (Digital IXUS family). Namely you point the WB750 at a scene or subject that hopefully the camera recognizes, automatically adjusting its settings to deliver optimum results. This means that it's not necessary for the user to manually delve into scene modes to call up the likes of 'landscape' or 'flower'; the WB750's operation is merely a case of point and shoot.

Incidentally, as you turn the shooting dial, a virtual version which the same eight settings rotates in tandem on screen, highlighting and explaining each one as you select it. Also found on the dial are a 'Dual IS' mode - which offers both optical image stabilization and the ISO boosting digital variety. In terms of light sensitivity the Samsung WB750 offers a respectable range, stretching from ISO 100 up to ISO 3200. We'll of course be examining how well it does at its higher settings in the Image Quality section of our review.

The dedicated scene mode requires the user to press either the Function button or the Menu button at the camera's rear and scroll through the 12 options to find them. Along with the usual staples of Night, Text, Sunset, Dawn, Beach and Snow, and Landscape, we also get the more interesting HDR, 3D Shot, Zooming Shot, Magic Frame, Beauty Shot and Backlight.

The Beauty Shot mode is useful for both acne-d adolescents and those of us who have over indulged by automatically retouching out spots and blemishes, while the Magic Frame applies various garish frames around your image with the effect previewed on the LCD screen. In the HDR mode the camera takes two shots at different exposures and combines them to create a single image with more detail in the shadow and highlight areas. Spotlighting the WB750's intended audience as the family, Samsung clearly wants its users to have to spend as little time post-processing images as possible - if any.

The adjacent setting on the dial is for the new Live Panorama mode, which shoots a Live, Action or 3D panorama simply by holding down the shutter button and sweeping the camera across the scene, much like Sony's pioneering Sweep Panorama mode in fact. The next mode is for the previously mentioned Creative Movie Maker, followed by video mode, which isn't really needed as there's a one-touch movie record button on the back of the camera.

Completing the WB750's range of shooting modes is the A.S.M option, which as the name suggests accesses the Aperture and Shutter priority and full Manual modes. There's no external dial for changing the values, instead you have select from the on-screen graphical options and then press the OK button a couple of times to actually be able to change the aperture or shutter speed. Despite this rather slow form of operation, the A/S/M modes make the WB750 more appealing to a wider, more experienced audience looking for a more capable compact camera.

Staying on the Samsung WB750's top plate, the next control along is the large-ish and springy shutter release button, surrounded by a rocker switch for operating the zoom. Controlled by a protruding lip that falls naturally under the forefinger, the responsive zoom quietly takes around five seconds to travel from maximum wide angle to full telephoto.

Once you've zoomed in and got your composition how you want, with a half press of the shutter button the Samsung WB750 is commendably swift to determine focus and exposure, the AF point highlighted in green and an operational 'beep' confirming you're good to go on and take the shot. With little noticeable shutter lag, at the highest resolution setting an image is committed to memory in just under two seconds, the screen blanking out briefly, which isn't bad at all.

Moving to the back of the Samsung WB750, this is dominated by the three-inch LCD screen, with a vertical strip of controls running from top to bottom at its right. The LCD screen is bright and has a commendable 460k pixel resolution, although we do miss the excellent AMOLED screen of the older WB650 model.

At the top of the run of controls is a welcome one-touch movie record button, making it a cinch to start and stop your high-def movie masterpieces, alongside a dimpled area to aid your grip on the camera. Underneath is the Menu button which provides a range of selectable options, the brevity or otherwise of which is dependant on the particular mode the user is in. Let's assume, for example, we're shooting in Program mode. Selecting Menu opens an icon illustrated vertical bar with five main options that provides drop down access to fine tuning the Camera, Movie, Sound, Display and Settings.

Next to the Menu button is the Continuous Shooting button. The WB750 can shoot at an impressive 10fps for up to 8 images, or slower 5fps and 3fps modes. There's also a precapture mode which takes 8 images between half-pressing and fully-pressing the shutter button, plus single mode and various bracketing options (exposure, white balance and photo styles).

Directly underneath the Menu and Continuous Shooting buttons is a four-way directional control pad with an OK button at its centre encircled by a control dial. This will be familiar to just about anyone who has ever used a digital compact before. Ranged around the four points are options for toggling the Display modes to show a nine zone compositional grid, all shooting information or just the very basics (i.e simply the number of shots remaining), self-timer modes, macro and focus modes, and the various flash settings.

A press of the OK button when shooting video meanwhile allows the user to pause and play/resume the recording - the feature which Samsung is highlighting as one of the WB750's unique ones. It works, though whether most of us would actually need/use it is a moot point. The circular control dial is a little thin and on the sensitive side, but it does allow you to quickly change the camera's options, and it's the only way to alter the aperture and shutter speed in combination with the OK button.

Below the control pad is a self-explanatory Playback button and the useful Function button, which handily doubles up as a delete button in playback mode. As expected the amount of information and options accessed via a press of 'Fn' again varies dependant on which shooting mode is selected. For example in Smart Auto mode the user merely has the ability to adjust the image size. Twist the dial around to the Program mode however and there's the ability to set the image quality, exposure compensation, ISO speed, white balance, smart filter, face detection, focus area, image stabilisation mode, and metering mode.

While that's it for the rear of the Samsung WB750, at its right hand side (if viewing from the rear) we find an included mini-HDMI port for hooking the snapshot up to an HDTV. Increasingly common for DSLRs that also shoot movies, it's still a comparative rarity to find such on a digital compact, even if it does shoot HD video. The required HDMI cable is an optional extra though, so bear in mind if you're on a budget.

Alongside the HDMI connection is a proprietary connector for Samsung's power and sync cable - the WB750 is recharged with the battery in-camera, either from an electrical socket or or alternatively straight from a USB port connected to your computer, rather than via an external recharger, which means that annoyingly you can't use the camera with a second battery whilst charging the first. Note that there is no port for USB and AV out. Also in the box is a quick-start guide as a hard copy, the full manual on CD ROM, plus a wrist strap.

The bottom of the Samsung WB750 houses a centrally located plastic tripod mount and a a sliding cover for protecting for the shared rechargeable battery / SD/SDHC/SDXC memory card compartment - there's also a meagre 8.3Mb of internal memory. Battery life is good for approximately 225 shots from a full charge - adequate if not incredible. As previously noted, Samsung provides a compact plug/charger set up in the box that charges the battery within the camera itself.