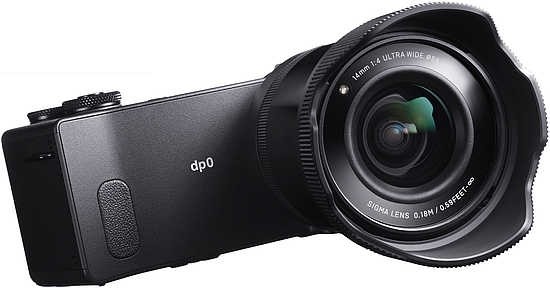 Essentially identical to the previous three Quattro cameras, the new DP0 Quattro extends the family even further by offering a 21mm equivalent ultra-wide-angle lens that offers a 90-degree view of the world.

Sigma continue to take a solitary path with the new DP0 Quattro, remaining the only camera manufacturer to use the Foveon sensor technology. Despite some improvements to the processing speed, the Sigma DP0 Quattro is a rather slow camera that's really only suited to static or slow-moving subjects, while the rather radical new design favours image quality over usability (apparently moving the memory card and battery away from the sensor helps to improve the former) - suffice to say, we didn't really get on with the much bigger DP0 Quattro with its awkward grip.

Despite those misgivings, though, the images that the DP0 Quattro produces are simply outstanding, by far the best images that we've seen from a mere compact camera and even rivaling a high-end DSLR with an equivalent and expensive prime lens. The DP0 Quattro may take a lot of getting used to, but it certainly takes great pictures.

The Foveon X3 Quattro sensor, whether you believe it to have the 39 megapixels that Sigma claim or or the native 20 megapixels of the top blue/luminance layer, and the prime 14mm lens deliver stunningly sharp, high-resolution images. Chromatic aberrations are once again non-existent on the DP0 Quattro, testament to the excellent prime lens. The maximum aperture of f/4 is a stop slower than the f/2.8 of the other Quattro cameras, but we'd argue that's not a deal-breaker for landscape and architectural use.

So once again, it's a case of image quality to the rescue for the DP0 Quattro - the 3-layer Foveon technology really does deliver a different look to cameras with Bayer sensors, a look that we like a lot. Only you can decide if this is enough to persuade you to splash out quite a lot of cash for an undeniably quirky, pared-back camera with a fixed focal-length lens that is really only suited to a slower, more considered approach. If that sounds like your cup of tea, then you won't be disappointed by the breath-taking images that the Sigma DP0 Quattro is capable of...