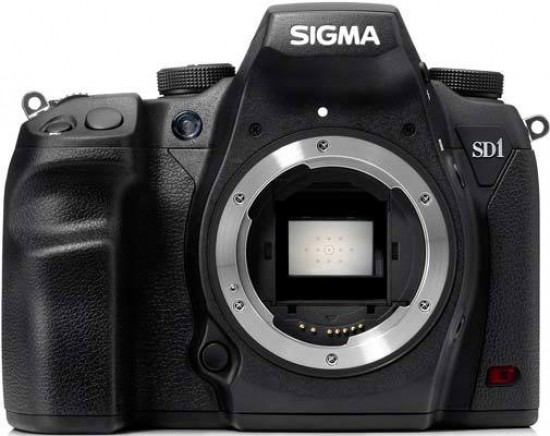 The Sigma SD1 Merrill DSLR is the flagship camera of the well-known Japanese lens manufacturer, renamed from just "SD1" in honour of Foveon’s founding father, Richard B. Merrill. It features a huge 46 megapixel APS-C X3 sensor, dual TRUE II processors, 11 AF cross points, magnesium body with O-ring weather sealing, ISO 100-6400 and a 3 inch screen on the back. On the surface the Sigma SD1 Merrill looks like it can compete with the big boys, especially with a revised price of £1,840 / $1,900, which is much, much lower than the SD1 originally sold for at launch.

Because of the status that the new Sigma SD1 Merrill has carried with it since it was unveiled last year, it's easy to get lost in the hype of the Foveon sensor technology, so let's cover it first to get it out of the way. Anyone interested in buying this camera will likely know how the Foveon sensor works. However, there will be a few who don't so for their benefit, we'll try to relay it in layman's terms.

The X3 sensor essentially has 15 megapixels. However, it's how the sensor is constructed that gives it the higher megapixel reading. You see, on a typical sensor, the pixels are laid out side by side and each pixel is responsive to a certain primary colour; red, green or blue. The pattern they follow is a row of red/green, a row of blue/green then it's cycled. The reason for more green is that the human eye is more receptive to this colour.

What Foveon do differently is stack the sensor in colour responsive layers meaning that each photosite is responsive to any of the three colours. Sigma and Foveon (as well as die hard Sigma fans) say that this means that the resolution can be  multiplied by three because - in a nutshell - each pixel has three pixels (if you were to compare it to a typical sensor). Many people argue this and it's an argument that's been going on for a long time. But surely, as long as it gives a sharp, well exposed, detailed picture, does it really matter? Shouldn't the end justify the means?

Every manufacturer has a dedicated image processor to fit to their cameras and usually one will suffice. Sigma have fitted two TRUE (Three layer Responsive Ultimate Engine) II processors to deal with the vast amounts of information that will be channeling onto the memory cards, of which you can only use Compactflash Type II or UDMA enabled cards. Given that a typical RAW image will output up to 45Mb, both of those TRUE II image processors are more than welcome.

Mirror vibration seems to have been a big thing for Sigma in the development of the SD1 Merrill. It features two separate motors, one dealing with the shutter and one with the mirror. This means less vibration as the mirror is actuated. There's also a mirror lock-up facility on the left command dial so you can get it out of the way before exposing. Should you activate it accidentally while changing lenses, the SD1 Merrill has a dust cover sat in front of the mirror chamber which will keep dust away from that area. It's fully removable for cleaning and also acts as the camera's IR filter. Removing it will help nicely for taking infra-red pictures.

Stripping away the controversy over the sensor, what you have is a well-built picture taking machine. There are two command dials on the top of the camera; one for selecting drive modes and the other for selecting shooting modes. Despite the SD1 Merrill being the top model, it features a pop-up flash just in front of the hotshoe. This isn't a bad thing - Olympus and Pentax do the same - it's just that stereotypically, built-in flash is seen on lower grade cameras and it seems unusual to have it on a camera that's so expensive.

Focusing is good on the Sigma SD1 Merrill. There's single or continuous AF found in the QS menu. Pressing the button on the top right shoulder allows you to select an individual focus point which is good for off-centre subjects. The camera does have a depth of field preview button on the front. Scrolling through the focus options will bring it back to all points where the camera will choose the best option. It's accurate and using an HSM lens, it's fast enough.

There are lots of dedicated buttons for changing features that will get a lot of use out of a professional photographer such as ISO, metering, exposure compensation, AF and AEL. If you can never remember where these buttons are, there's another way of changing things by pressing the QS button in the top right corner of the screen. There are 2 QS screens and you toggle them by pressing the QS button. It dedicates the navigation buttons to different tasks depending on the screen you're currently on. However, choosing an option from here, you have to keep pressing the same button to scroll through them instead of a simple left/right display. If you miss the option you want (as we did) then you have to scroll through again although there is a small counter alongside the selection you're scrolling through. It's akin to the Canon function menu or the Panasonic Q-menu which could be confusing to anyone currently using those brands because there's also a function button on the SD1 Merrill.

However, the SD1 Merrill function button brings up the full set of options on screen, kind of like when playing back the images and you press the info button on the left of the screen. This is where it gets a bit tricky: to choose the AF points, you need to press the OK button in the centre of the navigation pad but for the rest of this function menu, you need to press left or right. Pressing up or down will scroll through the options within the setting you're currently on. You got that? Pressing function will bring you out of the function menu, not pressing the shutter release button half way as you'd expect.

There are some features which are lacking on the SD1 Merrill which is disappointing. There's no live view which is a staple requirement of DSLR cameras these days, especially as the camera has a mirror lock up feature so it's possible to integrate it. There's also no video mode which is surprising because it's still a feature that people want to see on DSLR cameras, despite the uproar when it first got fitted. We first got confused when we saw the video output option in the main menu but quickly realised that this is for viewing still images on a television.

The SD1 Merrill's body is made of magnesium alloy for rigidity and it's good to see a camera made of sturdy stuff. It's also weather sealed for protection against rain. The grip has a sharp inward curve on the front but this fits the creases of your fingers nicely. The top command dials are tough to move, but that's OK because it means that they won't fall out of place or get knocked. We like the use of Compactflash II and the UDMA enabled cards. Frankly, the faster you can get a write speed, the better because these file sizes are huge.

From switching on to actually focusing and taking a picture took us around 2.5 seconds. Shutter lag with focusing takes around 0.07 seconds while focusing then shooting takes 0.60 seconds. In the burst test, we managed to get 11 fine JPEGs in ten seconds. This gives an average of 1.1 fps although the drive mode is much faster until the buffer fills up. In the drive mode test, the first shot we took was at 00.00.44 seconds and the fifth picture was 00.01.44 seconds. With this information and taking human reaction times into consideration, we're happy to agree that the camera can take 5fps as per Sigma's specification. The SD1 Merrill utilises DDR III technology to buffer the imaging information. We switched the camera into RAW and managed to get 7 images in a row in just over 1.5 seconds before the buffer filled up and the camera simply stopped taking pictures.

So far, so good. The SD1 Merrill looks like a perfectly capable camera. There's plenty to do and a lot of features for professionals and semi-pros. We like the flash sync socket but not the lack of tethering. We like the large LCD screen but not the low resolution. It makes thumbnails look like badly taken pictures and it's not until you zoom into them that you see just how sharp they are. But then it's easy to argue Canon's previous point that the screen isn't for pixel peeping, it's for basic preview and histogram checks. Proper viewing should be done on a computer or printed out.

We downloaded the software on the enclosed CD which is Sigma Photo Pro 5. It took around 30 seconds to prepare the installation and full installation takes another minute or so. We've excluded the time it takes to read all the terms and conditions (because everyone does that, right?). Converting the RAW images is a simple task, simply open the correct folder on Photo Pro 5 and go to Save Images As. You can choose all the pictures, just one or if you've selected any, it will default to the selected images option. You can choose JPEG, 8-bit TIFF or 16-bit TIFF files. We converted 1 picture to 16-bit TIFF which took us just over 1 minute and converting the set of sample images to 16-bit TIFF took around 45 minutes. Still, that's what happens when you choose a camera that can produce RAW files that are 45Mb in size. It's a lovely piece of software and our favourite we've seen from a CD with a camera.