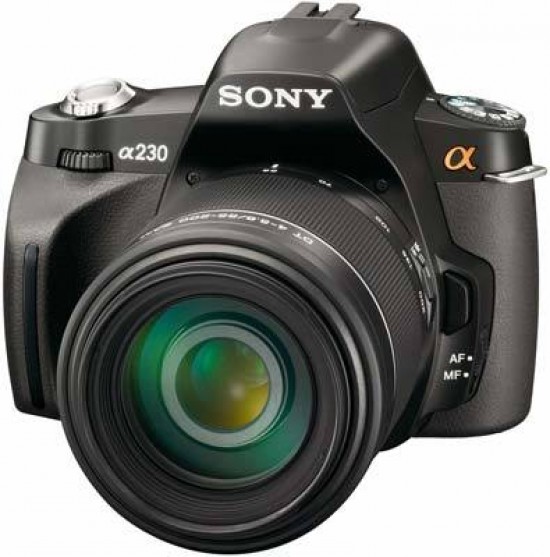 The Sony A230 is a new entry-level 10.2 megapixel DSLR camera, replacing the popular A200 model. Intended to be easier to use for people new to SLR photography, the A230 features a smaller and lighter design and enhanced user interface. The A230 retains all of its predecessor's key features, with a 2.7 inch LCD screen, anti-dust system, ISO range of 100-3200, anti-shake that's built into the body, eye-start auto-focus and Dynamic Range Optimiser. Sitting at the bottom of the Sony Alpha range below the A230 model, which additionally offers Live View and a tilting LCD screen, and the 14 megapixel A380, the Sony A230 has a street price of around £530 / $550 with the new 18-55mm kit lens. Does the A230 offer enough to beat the Canon EOS 1000D / Rebel XS, Nikon D3000, or Olympus E-450? Mark Goldstein finds out...

The first thing you notice when picking up the Sony A230 is that the build quality feels cheaper than its predecessor. There is little doubt that at least some of its weight loss comes from the use of less robust materials (which probably helps Sony's bottom line too), and is not only due to the smaller overall dimensions. The right-hand grip has been completely redesigned - for the worse, unfortunately. It is so uncomfortable it makes you wonder if the camera would do better without it (grip-less SLRs were the order of the day for decades, and nobody complained about that). And the grip is but one example where the new design lags behind the old one. The smaller body apparently forced the engineers to re-think the control layout and philosophy of the camera, and this has resulted in a number of questionable design decisions.

For starters, the number of external controls has been reduced, making the A230 less intuitive to use. The A200's separate Drive Mode, ISO and Display buttons are gone, and these functions are now mapped unto the four-way controller. That alone would not be objectionable at all - we have seen similar solutions that worked quite well - but unfortunately Sony's implementation has caused the four-way pad to cease functioning as a quick AF point selector. Now you need to enter the Function menu via the Fn button, navigate to 'AF area', enter, select 'Local', then repeatedly press the left or right arrow button until the desired AF point is highlighted, and finally exit the Function menu. That's about half a dozen button presses (sometimes more) required for something as simple as changing the active AF point!

This effectively means that most people will only use the central AF sensor for focusing, and recompose if needed. This age-old focus-recompose technique is much faster than selecting an off-centre focus point on the Sony A230, and works every time except when dealing with extremely shallow depth of field. To choose the central AF point, enter Fn --> AF area, select 'Spot', exit and don't ever change it again. Alternatively, you can use the AF button in the centre of the four-way navigation pad to focus on whatever is in the centre of the frame, and hold it down not only while recomposing but also while releasing the shutter too (so that pressing the shutter button does not cause the camera to refocus).

The AEL (auto-exposure lock) button is also gone, as is the highly useful Manual Exposure Shift function we liked so much in the A200 (which allowed you to quickly change the aperture/shutter speed combination without changing the EV in manual exposure mode). Of probably less importance is the omission of the SteadyShot switch - the A230 retains the sensor-shift image stabilisation feature of its predecessor, but now you need to enter the main shooting menu to activate or deactivate it. Given that about the only time you will want to deactivate it is when you mount the camera on a tripod, the omission of an external switch for this particular function seems a logical decision.

The controls that do remain are rather haphazardly placed, with almost nothing falling readily under your thumb or fingers. The new power switch is in a place where you would expect the control wheel to be - in the dark, or with the camera up to my eye, I sometimes switched the camera off accidentally, when my actual intention was to change the aperture setting. The control wheel itself is located further down, and the best thing you can do is try to train yourself to use your middle finger to spin it.

The optical viewfinder (OVF) of the Sony A230 appears to be identical to that of its predecessor, delivering 0.83x magnification and 95% frame coverage. The nine autofocus points are permanently marked on the focusing screen, and are therefore always visible in the viewfinder. The active AF point lights up in red when in use, and if focus is acquired, a green focus confirmation dot appears on the left side of the in-finder LCD; similar to other manufacturers' models. The LCD screen is a fixed 2.7-inch, 230,400-dot affair just like the one in the A200. The brightness of the screen can be set manually, but it can also adapt to ambient light levels automatically. Outdoors visibility is average - we've seen much worse (more reflective) LCDs on some competitors, but would still like to see some improvement to the antiglare coating.

The Sony A230 has a pop-up flash with a guide number of 10 (in metres at ISO 100). This is a small step back from the one built into the A200, which had a guide number of 12. Of more importance is its mode of operation. There is no mechanical button to raise the flash, and neither are you advised to raise it by hand. Instead, if you would like to use it, you need to enter the Flash menu by pressing the right arrow key on the four-way pad, choose the required flash mode (Fill, Slow or Rear) and exit the Flash menu. The flash will only pop up when you (half-)press the shutter release. If you don't want to use it any more, it is not enough to push it back - you need to re-enter the Flash menu and select the Flash Off option. Otherwise it will pop up again the next time you hit the shutter button. As with the AF point selection procedure described above, I found this solution to be unnecessarily complicated and in conflict with the A230's billing as an easy-to-use SLR. To be fair though, some shooting modes allow the user to choose an Auto Flash option, which will probably please novice users - but it's no substitute for a well thought-out user interface.

The pop-up flash can also act as a TTL controller for wirelessly slaved external flash units. External flashguns can also be mounted to the camera itself via the hot shoe. Be reminded that it is not of the standard variety - non-dedicated flashguns and other hotshoe-mounted accessories such as PocketWizards cannot be mounted without a separately sold hot shoe adapter.

The A230 has a few niceties inherited from its forebears. These include the sensor-shift image stabilisation system we already touched upon (and which Sony now calls SteadyShot Inside), an orientation sensor that rotates the status display so it remains readable even if the camera is in portrait orientation, a pair of eye proximity sensors beneath the viewfinder that automatically shut down the LCD when raising the camera to your eye, and Minolta's legacy Eye-start AF technology. In the field, I found the eye-start autofocus system to be somewhat useful, though not necessarily faster than the more traditional solutions.

As far as the anti shake system goes, it works very well for providing camera stabilisation at relatively slow shutter speeds - see a demonstration in the Image Quality section of this review - but it's less effective at the other function Sony has tasked it with; namely, shaking off any dust particles that may have settled on the sensor during a lens change. Apparently the anti shake system was simply not designed to move the sensor fast enough to shake off the dust - this will be evident if you look at some of our samples that clearly exhibit a few dust spots.

New to the Alpha A230 - and also to its bigger brothers the Alpha A330 and A380 - is a so-called help guide display, which teaches beginners about the effects of aperture and shutter speed, both by way of a text guide and via icons such as stick figures. This approach is certainly better than simply throwing in an auto mode and a host of scene modes, which is not to say the A230 lacks any of these, but the inclusion of the help guide does mean it goes a step further.

The Sony A230 has slots for both SD/SDHC and Memory Stick PRO Duo memory cards. Dual card slots are always welcome, though the A230 unfortunately has one of the least useful implementations of the concept we have seen to date. The camera cannot record simultaneously on both cards, cannot copy images from one to the other, and cannot even switch automatically to the second card when the first one fills up. To do that, you need to open the sliding cover that hides the memory card compartment and manually move a small mechanical switch to the desired position. The same compartment that houses the memory cards gives shelter to the USB and HDMI OUT ports too.

In use, the Sony Alpha A230 proved to be fairly quick, putting aside the operational glitches and design flaws described above. Start-up was nearly instant, autofocus with the kit lens was fairly speedy if not quite as quiet as with an SSM lens. The camera's burst mode was an unimpressive 2.5 frames per second. Image playback speeds were more acceptable. Magnifying into an already captured image does take a couple of seconds though. Maximum image magnification is 12x, but there is little point in going beyond the default 6.1x setting as the image progressively falls apart at higher values.

To round it off the Sony DSLR Alpha A230 has a few features that put it ahead of its immediate competitors, such as an Eye-start AF option for when shooting with the optical finder and eye proximity sensors that automatically shut down the LCD when lifting the camera up to one's eye, but it has a few comparative disadvantages too, namely no Live View, no video mode, and no tilting LCD screen. It's actually a step back from its predecessor the A200 in terms of ergonomics and handling, which ultimately leads to a less pleasant shooting experience.

But handling, features and performance are only one side of the coin - the other one is image quality. Read on to find out how the Sony Alpha A230 measures up in that area...