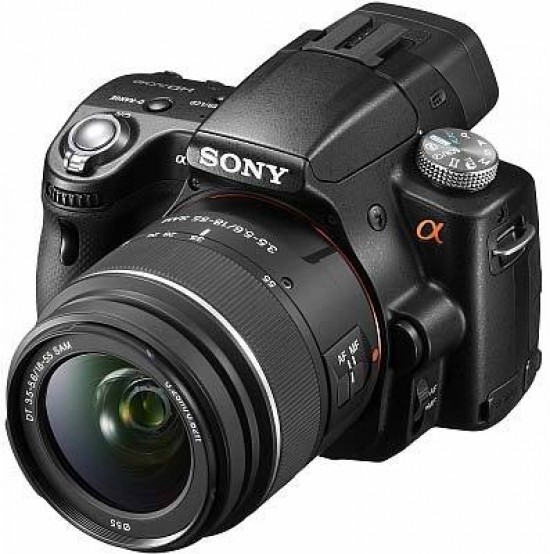 Since stepping into the DSLR market in 2006, Sony have become possibly the most progressive company around. They've built on the existing reputation from Minolta and turned the cameras into something unique. In 2010, they took it one step further and introduced the SLT cameras. SLT stands for Single Lens Translucent and the major feature is the mirror that stays in position during an exposure. This leads to much faster shutter speeds on lower specification cameras. One such camera is the new SLT-A35, which boasts a 16.2 megapixel sensor, Full HD AVCHD video, 3D Sweep Panorama, 5.5fps continuous shooting, an ultra wide 3.5 inch screen as well as the more frequently seen Minolta A mount and SteadyShot Inside. The Sony A35 SLT camera starts at £520 / $600 body only and is also available in single and twin lens kits.

Despite its historic roots, the Sony SLT-A35 has changed a lot from the blocky Minolta SLRs, or indeed the early Sony DSLRs. The camera has a curvier look to it with smooth bulges and sweeping edges. There's lots of buttons on the A35 to keep you occupied. Newcomers to photography thinking about this camera might be a bit bewildered at first. There are 5 buttons on the top plate alone. Funnily enough, though the camera isn't cluttered. There's even enough space for a contoured thumb rest area next to the function menu button.

Pressing the function menu will open up a quick access menu on the screen which can then be accessed using the navigation pad on the back. The 3.5 inch LCD only uses the equivalent of a 3 inch screen for shooting, the black sides are used for the function menu options which are constantly displayed. It sounds an unusual way of doing things but it serves as a constant reminder of what settings the A35 has. General shooting information is displayed across the top of the screen such as shooting mode, file type, pictures left and battery power which is shown as a percentage. In the bottom right corner are the picture styles. The 6 options are standard, vivid, portrait, landscape, sunset and black & white. Within these settings, you can also manipulate the contrast, saturation and sharpness. The exception is black & white which can't adjust the saturation for obvious reasons.

The screen features a TruBlack coating which is a gel coating that sits in between the LCD and the glass. It removes the traditional air gap making images clearer, contrasts harder and the actual screen more durable. The resolution of the screen is 921,000 dots, which is around 307,000 pixels. The viewfinder is electronic and doesn't come on as a default. It's activated by the small sensors on the bottom of the eyepiece that detect when you've moved the camera up to your eye. The screen then switches off and the electronic viewfinder (EVF) comes on. One of the 5 buttons on the top plate is to switch between the two, but it's not a permanent thing. If you switch it to EVF by pressing the button, as soon as you take your eye away again, it switches on the screen.

Getting back to the translucent mirror, Sony aren't the first company to have such a feature. Canon had a pellicle mirror from as early as the mid 1960s and released one every decade until the Canon EOS 1n RS in 1994. Nikon also released 2 models called the F2 HS and the F3 HS. There are distinct advantages to having a mirror that doesn't move for a number of different styles of photography. For example, the lack of mirror movement means a quieter function because of the lack of mirror slap. However, the Sony is still loud in its operation. No movement also means a still camera which is great for macro or fine detail photography where even the slightest movement can produce a blurred image.

The Sony A35 has a continuous shooting capability of 5.5fps or 7fps when the command dial is in the telezoom mode (this reduces the resolution to 8.4 megapixels and sets the compression rate to medium). It also allows continuous focusing in Full HD video using the 15 point TTL phase-detection instead of settling for the slower contrast detect AF system. This is the reason behind having the translucent mirror. You see, the camera operates in a similar way to mirrorless cameras such as Sony's own NEX series. However, those cameras have to use a contrast detection AF system. The mirror reflects part of the image onto the phase-detection AF system which is in the roof of the mirror chamber. phase-detection is much faster than contrast detect and a lot more precise with less hunting.

There are downsides though, such as an amount of light loss because the light is split between the sensor and the viewfinder or in this case the EVF. The mirror has to be kept as clean as possible as well because unlike a DSLR, any dust on the mirror will affect the end result.

The Sony A35 is an intermediate level camera designed for users who want the advanced features and manual control of a high end camera with the small size and ease of use of an entry level model. The body is a polycarbonate shell and is covered in the mottled paintwork associated with higher end models.

The battery door has a lock on to stop it opening by accident and the battery is a Sony Infolithium NP-FW50. Alongside the battery sits the memory card. The A35 has a dual slot for either Memorystick PRO Duo, PRO-HG Duo or SD/SDHC/SDXC.
On the left side of the body are the ports for plugging in the USB or HDMI cables and there's also MIC and Remote ports. The covers are bendy rubber and it would be nice to see hard covers here.

The SLT A35 sample that we received came with the standard 18-55mm f/3.5-5.6 SAM lens. It's a typical kit lens with a plastic lens mount and standard optical ability. We found we got the best results from around 35mm while at an aperture of f/8 or f/11. This is usual for any lens but the Sony still manages to produce some crisp shots. There's an AF/MF switch on both the lens and the body and this is because not all lenses that are compatible with the camera have an AF/MF switch. Bear in mind that not only can you fit Sony A mount lenses, you can also fit Minolta A mount and Carl Zeiss A mount lenses.

So the Sony A35 is driving technology forward and there's fear that older functions could be lost. The exposure compensation button has already started to disappear from digital compact camera backs. It's refreshing then, to see a small depth of field preview button on the underside of the lens.

Because the Function menu is always displayed it's easy to get used to where the options are and speed of use will increase steadily as you use the camera. The main menu is a lot bigger with 6 sections, each having 2 or more pages with the exception of the memory card section which has 1 page. It's interesting that Sony have removed the resolution from the function menu and placed it in the main menu. This could be an indication that they don't consider resolution to be that important anymore (though given the ridiculously high pixel ratings lately, that's unlikely). The menu is scrolled through using the navigation pad on the back. It's not the easiest one to use because of the bowl design of the pad and because the right side has a small lip around it. It's there because the body drops away and without this lip, it would leave a big wedge of the pad showing on the side. However, it gets in the way when pressing right which is annoying.

Apart from the fast continuous exposure, the A35 also has a fast start up time. We managed to get the camera on, focused and taking a picture in less than a second (0.965sec to be precise). Our shutter lag timings came up at 0.08 seconds which is around the same as a compact camera with the pre-focusing. Without pre-focusing, the camera responded in around 0.15 seconds. In video, the focusing uses a smoother focus routine and doesn't have to hunt through the focal plane in the same way a digital compact camera does. So it's a pretty quick camera in all fields. It's just unfortunate that the processing time takes what seems like an age.

There's not a great deal to do in the playback menu which is simply fine by us. Putting editing functions in there to make it an all-in-one module would sully the professional outlook that the A35 has. There's a provision to make a slideshow, adjust the image index and specify pictures for printing among other more frequent options such as deleting pictures or protecting them. There is a 3D view option if you have any 3D Sweep Panorama pictures on the card but this is only available with a compatible television.

Within the box, you get the camera body and the standard 18-55mm lens if you get it in a kit. There's a battery, charger and USB lead for camera to computer connection. Most computers come with a built-in card reader these days and if not, a dedicated card reader will work faster than the camera and a decent one costs around £20.

Hoping you'll love the A35 so much that you want to invest, there's a brochure on lenses and accessories which makes interesting reading. A full manual is also included while the CD is reserved for the RAW converter and Picture Motion Browser (PMB) software.