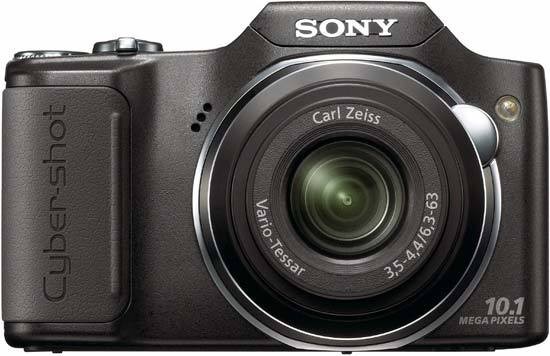 Those who take only a quick look at the Sony Cyber-shot DSC-H20 may be forgiven for thinking it to be just an incremental upgrade to the H10 model of last year – but if you read on, you will find out that significant improvements have been made to the handling, the feature set and the image quality alike.

What hasn't changed is the stabilised, 38-380mm equivalent, f/3.5-4.4 Carl Zeiss Vario-Tessar zoom lens, which is not nearly as wide as that of some of the competing compact super-zoom models like the Panasonic Lumix DMC-TZ7 or the recently announced Casio EX-H10, but does at least provide more reach at the telephoto end. Like most small-sensor compact digicams, the Sony H20 makes do without an iris diaphragm in the lens, meaning that the term 'stopping down' only refers to the engagement of a built-in neutral density filter.  In consequence, you only have two 'aperture settings' at your disposal, irrespective of where you are in the zoom range. Another corollary is that stopping down hasn't the slightest effect on depth of field, which can thus be only controlled by changing the focal length or the camera-to-subject distance when feasible.

The right-hand grip, which seemed hardly more than an afterthought on the H10, is much more of an integral part of the body on the Sony H20, and it now sports a textured rubber coating too, which feels nice to the touch. The newer model also has a thumb rest on the back of the body, which is similarly rubberised. All this means that the H20 is noticeably more pleasant to hold than its predecessor.

The controls on the top of the H20 have also undergone some changes, in terms of both design and functionality. Most importantly, the shutter release is now encircled by a zoom lever, just like on the majority of compact cameras – this solution is more intuitive than the rocker buttons that were located on the rear panel of the preceding model. Furthermore, the elongated power button of the H10 has given way to two round buttons, one of which offers the same on/off functionality, whereas the other one toggles the 'Smile Shutter' function.

When the camera is in 'Smile Shutter' mode, you do not need to use the shutter release at all – the H20 constantly monitors the scene for smiling faces, and when it detects one, it fires off the shutter automatically for you. The sensitivity of the 'Smile Shutter' can be tailored in the menu. This is a fun feature that will likely keep any company entertained for a fairly long time – but we would really love to be able to reprogram this button to directly access ISO settings or exposure compensation, both of which functions are menu-driven on the H20.

The mode dial is in the same place as on the H10, but it no longer features the confusing high-ISO mode that did not belong on the dial anyway. Fortunately, the full-manual exposure mode, which definitely puts the Sony H20 ahead of its direct competitors, has been carried over. Obviously, with no iris diaphragm in the lens, you don't get much in the way of actual aperture control - but having a manual mode is still nice when shooting in constant light, for instance. The Program and Movie modes have also been retained – what's more, the H20 now offers HD video recording as well, at 1280x720 pixels. Another improvement is the ability to use the zoom while recording a movie. The microphone does pick up some of the zooming sound, but it's fairly unobtrusive, and not a huge price to pay for what is still a rare functionality on most digicams. Film clips can be colour, black and white or sepia toned. Exposure compensation, the metering and focusing mode and white balance can be set for movies as well as stills. You can also use image stabilisation.

The Sony H20 features two auto modes, Easy and Intelligent Auto Adjustment, the latter of which is labeled with a lowercase 'i' followed by a camera icon. In this mode, the camera analyses the scene in front of the lens and picks the scene mode it deems appropriate. Of course, there is a separate SCN setting on the mode dial if you want to pick the desired scene mode yourself.

Moving to the back of the camera, we are presented with a completely re-thought and accordingly redesigned user interface. We have already mentioned that dropping the rear zoom rockers in favour of a top-mounted lever has freed up space for a rubberised thumb rest, but this is not the only change. Those who have read our review of the H10 will remember that we criticised that camera's Playback button for being too small and occasionally difficult to push – well, apparently Sony have listened and made it bigger. Not only that, they also moved it to a better location, where the Menu button was on the H10. The latter has in turn occupied the position of the Home button, which is now gone altogether. The only things that have remained practically unchanged are the 3' LCD screen and the four-way pad (although the latter is now black instead of silver).

The LCD is gorgeous and remains visible even in direct sunlight – it's really among the best screens out there, which is great news as there is no eye-level viewfinder of any sort on the H20. The four-way controller provides essentially the same functionality as on the H10, with the Left button giving access to the macro mode, the Down key bringing up the self-timer options, the Right arrow controlling the flash mode and the Up button cycling through the various display settings, including a live histogram, which I found really useful.

The long, multi-page menu of the Sony H20 is similar to that of the H10 but importantly, it now wraps, meaning you can now simply jump from the end to the top without having to work your way back. This menu is essentially a graphical user interface that lets you modify a legion of settings, particularly in P and M modes. These include image resolution and aspect ratio (4:3, 3:2 or 16:9), drive mode, colour settings, ISO sensitivity, ambient and flash exposure compensation, metering, focusing mode, smile detection sensitivity, red eye reduction, white balance (which now has a custom setting, something we missed from the H10), Dynamic Range Optimiser (DRO), contrast, sharpness,, SteadyShot image stabilisation and camera setup.

Many of these are self-explanatory, but a few deserve special attention. Among these are the focusing mode, DRO and SteadyShot settings. Focusing can be automatic or manual, with the auto-focus options being Multi, Centre and Spot AF. Face detection can also be activated and tailored to your needs. This means you can tell the camera to give priority to adult or child faces. Manual focus isn't what you would think it is: you can only set the focus to one of four predefined subject distances, including 1m, 3m, 7m and infinity. Nevertheless it's useful when you want to do street photography with the lens fixed at the wide end - you simply set the subject distance to 3m and shoot away happily, knowing that everything between less than 2m and infinity will be in focus. This speeds up the camera as it doesn't have to engage the AF, and increases the chances that you'll capture the moment.

The DRO settings are off, DRO Standard and DRO Plus. DRO is the same thing other manufacturers call D-lighting, i-Contrast and Shadow Adjustment Technology - it automatically lifts the shadows to prevent them from coming out too dark when photographing a contrasty scene. This is done in a way so that it doesn't affect the midtones or the highlights – see a demonstration in the Image Quality section.

SteadyShot is Sony's brand name for image stabilisation. You can specify if you want it to kick in only when you half-press the shutter release button or to be always on or turned off. 'Always on' drains the battery quickly, so it is not really recommended. Turning it off might be a good idea when the camera is mounted on a tripod, so that the stabilisation system won't cause any motion blur by trying to counter vibration that is not there.

The Sony Cyber-shot DSC-H20 is powered by a proprietary lithium-ion battery and records images on Memory Stick Duo and Memory Stick Pro Duo cards (note that it is not compatible with the older, bigger Memory Sticks). Battery and card share the same compartment, and each has a practical lock that keeps it from falling out of the camera when the cover is open. The tripod mount, which is made of metal just like that of the H10, has been moved further away from the battery/card compartment door, so now it is possible to change batteries and memory cards even when the camera is mounted on a tripod – another small but very welcome improvement over the preceding camera model.

There is only one connection port on the H20, and this is what you use to hook the camera up to a printer, computer or standard-definition TV set via the supplied 'octopus' cable. To connect the Sony H20 to an HDTV, you will need a separately sold Type2b-compliant HD output adaptor cable.

In use, the Sony DSC-H20 proved to be a capable and responsive camera. The AF system is surprisingly fast, especially at wide angle. One thing I noticed was that it seemed to be 'always on', adjusting itself continuously even when I was not holding the shutter release pressed halfway – this is no doubt one of the reasons why the system was faster than on most compacts, although it did mean that things would go out of focus occasionally, without my intervention. The ability to set the focus manually to one of a few predefined distances meant that you could effectively 'zone focus' with the H20, something few other digicams will allow you to do.

Camera operation was smooth and straightforward, though I did miss dedicated direct-access buttons for ISO control and exposure compensation. As noted earlier, I wish the 'Smile Shutter' button was reprogrammable to perform one of these tasks. Card read and write speeds were adequate with the Lexar branded 512MB Memory Stick Pro Duo I was using. Curiously, the H20 would regularly display an error message saying, 'this Memory Stick may not record or play', even though the card worked just fine. This was just a minor annoyance though, as a half-press of the shutter release always caused the warning to disappear. Overall, the Sony DSC-H20 was a pleasant, versatile and rewarding camera to shoot, and one you could take pretty much anywhere, even in a standard shirt pocket if you were so inclined.