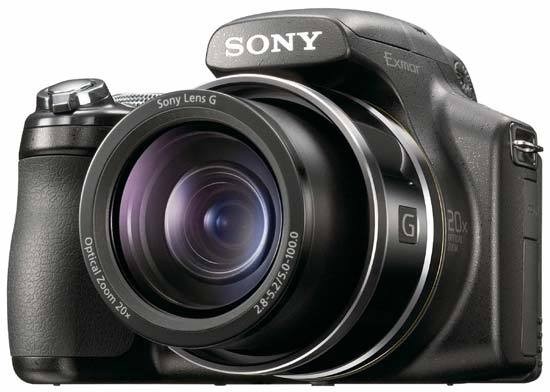 All of the sample images in this Review were taken using the 9.1 megapixel JPEG setting, which gives an average image size of around 3.5Mb.

The Sony Cyber-shot DSC-HX1 produced images of good quality during the review. The G lens proved surprisingly sharp for an ultrazoom, and at normal subject distances, it is also exceptionally well corrected for geometric  distortion. It is only at extreme close-ups that you can see some barrelling. And the lens is indeed capable of some truly extreme macro performance, filling the frame almost completely with a subject as tiny as a common Compact Flash card.

Chromatic aberrations, while noticeable as purple fringes along contrasty edges, was less of a problem than I expected it to be with a 20x zoom. As far as noise is concerned, there is more of it at base sensitivity than we would have liked to see, but the images remain usable up to ISO 800 (and ISO 1600 is passable with reservations). The Sony Cyber-shot DSC-HX1 lets the user define the amount of noise reduction applied, so you have a choice of more noise and less detail smearing or vice versa.

The Hand-held Twilight and Anti Motion Blur modes produce images with less noise but generally less sharpness than a single high-ISO shot. Owing to the unique Sweep Panorama mode, panoramas couldn't be easier to take - but it's a shame that they are of fairly low resolution only. With a maximum shutter speed of 30 seconds, the camera is well suited to night photography, although night shots are somewhat noisier than we'd like.

The base sensitivity of the Sony Cyber-shot DSC-HX1 is an unconventional ISO 125, with 200, 400, 800, 1600 and 3200 being also selectable. The images aren't perfectly noise free even at the lowest settings, but they are usable up to ISO 800. At ISO 1600, the photos take on a painterly look when viewed at 100% magnification, but they are still more than acceptable for onscreen viewing and small prints. ISO 3200 brings about yet more noise and a massive drop in saturation. Unusually for a compact digicam, the Sony Cyber-shot DSC-HX1 allows you to set the strength of the noise filtering to one of three levels. The crops below were shot at standard settings.

The 20x zoom lens has a massive focal range, as illustrated by these examples; taken from the same viewpoint at the wide and telephoto end of the optical zoom range.

The Sony Cyber-shot DSC-HX1's G lens delivers sharp results at most focal lengths, and the photos do not stand up particularly well to further sharpening. Nevertheless you can try applying some unsharp masking in a program like Adobe Photoshop. The crops below represent what you can expect. The right-hand images had some sharpening applied before being Saved for Web - Quality 50.

For an ultrazoom, the Sony Cyber-shot DSC-HX1 handled chromatic aberrations very well during the review. The crops below represent the worst case scenarios encountered.

The Sony Cyber-shot DSC-HX1 has an excellent macro mode. The following photograph, which shows how close you can get to the subject (in this case a compact flash card), was taken at 2.4x zoom. As you can see, the card fills the frame almost completely.  Note that there is still some barrle distortion visible in the image - you can't see this at normal subject distances though.

These shots of a white ceiling were taken at a subject distance of 1.5m. There is very little light fall-off in the pictures taken without flash, and noticeably more in the flash shots, but it's still above-average performance.

The flash caused very little red-eye in this test.

The slowest shutter speed available on the Sony Cyber-shot DSC-HX1 is 30 seconds, which is very good news if you are seriously interested in night photography. The following photo was taken at a shutter speed of 8 seconds at ISO 125. We have included a 100% crop to show you what the quality is like.

These examples are 100% crops from two photos taken at 1/15 second at the 560mm equivalent setting. As you can see, the Super Steady Shot image stabilisation system can mean the difference between a sharp and a blurred photo when taking hand held shots at shutter speeds that are critically slow for the focal length used.

DRO is Sony's solution to bring up the shadows in a photo taken in contrasty light without blowing out the highlights. The available settings are Off, DRO Standard and DRO Plus. These photographs, taken at identical exposure settings, illustrate the difference.

The Sony Cyber-shot DSC-HX1 allows you to apply a set of colour filters to your images digitally, and their effect can be previewed live on the monitor or in the electronic viewfinder. The available settings are Off, Red, Green and Blue, plus there is a warming and a cooling filter too.

One of the high points of the Sony Cyber-shot DSC-HX1 is its ability to shoot a burst at up to 10 frames per second. The following series of 6 photographs was shot at 10fps.

Another standout feature is the Hand-held Twilight mode, in which the camera takes six high-ISO photos in rapid succession, and combines them into a single image. To test this, we took the same shot twice, once with the feature enabled, and once in manual mode at the exact same exposure and ISO settings. The Hand-held Twilight photo turned out to have somewhat less noise, but was noticeably softer too. (The other new mode, Anti Motion Blur, works in a similar fashion.)

The Sony Cyber-shot DSC-HX1 allows you to take panoramic images very easily, by 'sweeping' with the camera while keeping the shutter release depressed. The camera does all the processing and stitching. The catch is that the resulting image is of fairly low resolution. Check out some examples below.