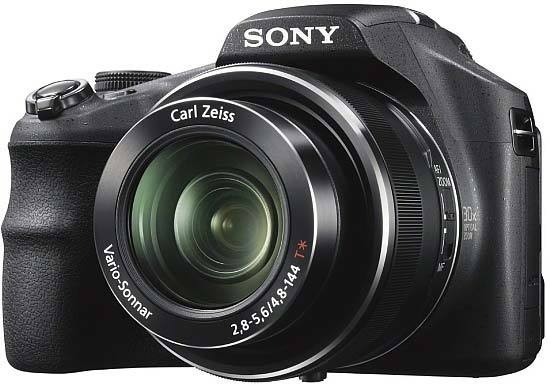 All of the sample images in this Review were taken using the 18 megapixel JPEG setting, which gives an average image size of around 5Mb.

The inherent beauty of any super zoom camera is the ability to choose from a wide range of framing options, and photograph a broad range of subjects, without having to take a single step forward or back. Unfortunately most new product releases appear to be about impressive specification lists rather than impressive performances. Fortunately for the 30x optical capacity of the Sony Cyber-shot DSC-HX200V, it’s not just an exercise in numbers however. Here the entirety of the focal range is actually useful in that we were able to achieve sharp results consistently from shot to shot when shooting handheld at maximum telephoto - a rare thing indeed. The performance at the telephoto end of most competing models is distinctly soft.

Conversely, at the extreme wideangle setting we did notice some slight fall-off towards the corners of the frame, though this is only visible if you’re looking for it and is subtle at best, as is the inevitable pixel fringing between areas of high contrast. Generally though, the HX200V acquits itself very well indeed, with bags of detail in every shot and good, even exposures too that manage to maintain both highlight and shadow detail. The result is that you will very rarely find yourself wanting to alter any of the results straight out of the camera in Photoshop or its ilk.

For shooting in low light, this Sony of course offers the impressively broad light sensitivity range option of captures between ISO100 and ISO12800 at top whack. You’ll want to stick at ISO3200 or below however if you want to avoid the effects of vigorous processing to keep image noise well under control. However at ISO 6400 we’d offer that results are still perfectly usable, so it appears this pushing of the spec is advantageous to the user rather than just a number to stick on the box.

The Sony Cyber-shot DSC-HX200V is a super zoom camera that is actually not only a jack-of-all-trades, but also a master of most of them. Picture wise, there’s not a lot here to find fault with.

There are 8 ISO settings available on the Sony CyberShot DSC-HX200V. Here are some 100% crops which show the noise levels for each ISO setting.

The Sony CyberShot DSC-HX200V handled chromatic aberrations well during the review, with some purple fringing present around the edges of objects in high-contrast situations, as shown in the examples below.

The Sony CyberShot DSC-HX200V allows you to focus on a subject that is just 1cm away from the camera when the lens is set to wide-angle. The first image shows how close you can get to the subject (in this case a compact flash card). The second image is a 100% crop.

The flash settings on the Sony CyberShot DSC-HX200V are Auto, Forced Flash, Slow Syncro, No Flash, with a Red-eye Reduction option in the Main menu. These shots of a white coloured wall were taken at a distance of 1.5m.

The Sony CyberShot DSC-HX200V's maximum shutter speed is 30 seconds in the Manual mode, which is great news if you're seriously interested in night photography. The shot below was taken using a shutter speed of 4 seconds at ISO 100. I've included a 100% crop of the image to show what the quality is like.