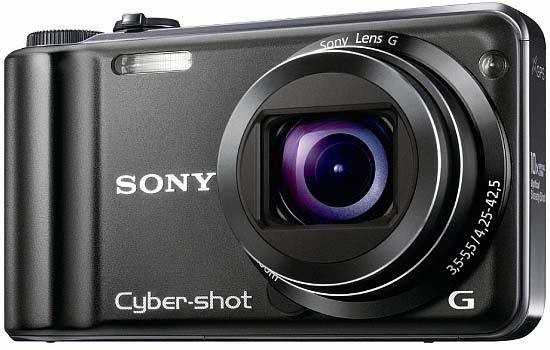 Reviews of the Sony Cyber-shot DSC-HX5 from around the web.

Like most of its peers the HX5 is designed more for practicality than for style, but it's still a good looking camera, and is available in black or silver. It has an all-metal body which is rather box-like, but which has a rounded grip moulded into the right-hand end making it very comfortable to hold. It's quite small by long-zoom compact standards, measuring 102.9 x 57.7 x 28.9mm and weighing 200g including battery and memory card.
Read the full review »

The Sony Cyber-shot DSC-HX5V ($349) is a compact ultra zoom camera with several features that differentiate it from most of its competitors. They include a back-illuminated CMOS sensor, which promises better-than-average low light performance and super-fast continuous shooting, plus a built-in GPS, unique sweep panorama feature, and 1080i HD movie recording. That's on top of the 10X, 25 - 250 mm Sony "G" zoom lens, optical image stabilization, 3-inch LCD, limited manual controls, HDMI output, and support for both Memory Stick Duo and SD/SDHC memory cards.
Read the full review »