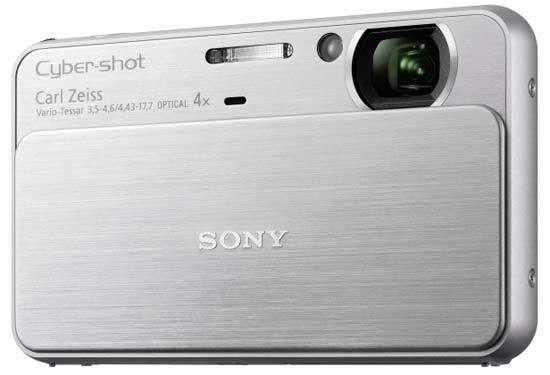 Unlike Sony's Cyber-shot WX5 with its conventional boxy shape and protruding zoom lens, the flat-fronted brushed metal 14.1 effective megapixel, 4x optical zoom T99 is a slim-line snapshot contender of the slide open and shoot lens cover variety. This means its internally stacked optics are hidden from view when the camera is inactive, and at no point extend proud of the faceplate surface when in use.

This enables the camera to retain coolly minimalist proportions of 93x55.6x16.8mm that are almost an exact match for a business card in width and height (if not quite depth), while rounded edges further ensure that the T99 slips easily into any trouser pocket, shirt pocket or handbag to be ready for spur of the moment snapping. It's available in the usual array of colour options - five in the UK - including the smart silver version we had in for review, and weight is 105g without rechargeable battery or SD/SDHC/SDXC or Pro Duo card (32MB internal capacity providing back up). At the time of writing its manufacturer's asking price is £179.

While the above could describe almost 50% of compact JPEG-only point and shoots these days, the difference here is that the T99's entire back screen is taken up by a 3-inch widescreen ratio touch sensitive display boasting a standard 230,400-dot resolution, meaning that what few physical controls there are have been pared back to the essentials and are found located only on the camera's top plate.

These comprise the shutter release button, small and indented on/off button, equally small and slightly fiddly zoom lever shunted to the top right hand corner and given a roughened surface to improve purchase, plus, thankfully, a dedicated playback button so that images can be viewed quickly without having to slide open the faceplate and expose the lens first. A press of this also powers up the camera, without having to first press the on/off button. So getting up and running with the T99 is also fairly intuitive.

Again, lens, LCD and resolution aside, a smattering of the latest must haves are on board. These include HD movie recording - albeit at 1280x720 pixels, 30fps and in widely compatible MPEG4 format - along with Sweep Panorama, in 2D, rather than the triple aspect provided by the WX5 and TX9. Though more unusually for your otherwise standard snapper here we get an Underwater Sweep Panorama option (the camera itself isn't waterproof), as found on the TX9, along with more regulation issue Bionz processor and Carl Zeiss branded lens. There's no HDMI output however for hooking directly up to a flat panel TV; just the standard AV/USB out via a multi component cable attached to exposed universal port at the camera's base.

For those looking to shoot in a wide variety of lighting conditions, ISO800 up to IO3200 is offered in incremental steps, the lens optically stabilized to help further prevent blur when shooting handheld, though as with other cheaper snapshots we found the T99's built-in flash is overly keen to fire to preserve detail when the camera is in 'auto everything' intelligent auto mode - and seemingly when there is plenty of available light. Inevitably it's tricky to hold the camera rock steady as there's no concession at all to a handgrip, so the rear screen becomes covered in finger and thumbprints as your digits slip and slide over its surface and you wrestle with it.

More positively it's also worth mentioning that the T99's lens starts out at a wide angle 25mm (35mm equivalent) and runs up to a more modest 100mm at the telephoto end. So it's adept at those wide angle landscape shots and group portraits, if not quite the ideal for candid portraiture as you do have to get fairly close to any subject if looking to fill the frame with it. At the macro end of the scale, subjects as close as 1cm from the lens can be captured.

Of course you want any point and shoot camera to be as easy to use as possible, and Sony here includes the scene and subject recognizing intelligent Auto mode as the T99's default option, though alternative shooting modes, including program, the aforementioned Sweep panorama and movie mode, plus a 13 option strong scene mode are also available for selection with a finger tap.

In normal 4:3 aspect ratio mode, black bands crop the T99's screen at left and right hand side, and it's on these bands rather than overlaying the image itself that shooting display and selection options are provided, though if you do select shooting modes these choices fill the screen instead. However, if choosing menu option, the available choices overlay the picture itself, so there's a lack of consistency there.

As we noted at the outset, from the front the Cyber-shot DSC-T99 looks very smart when held in, and almost enveloped by, the palm. With faceplate obscuring the lens, it won't be immediately obvious to the untrained eye that this is a camera at all. Slide open the faceplate and there's an audio flourish while the rear screen bursts into life.

This exposes the fact that the lens is located top right of the flat faceplate when inevitably it can fall prey to fingertips straying into shot if gripping the camera in both hands to take a picture, though it's light enough for one handed operation. To the left of the lens is a small AF assist/self timer lamp window, and to the left of this again a very narrow sliver indeed housing the built-in flash, which has to be one of the very smallest we've ever seen on a digital camera. Beneath the flash is housed the built-in mono microphone.

On the subtly rounded top plate we find the physical controls. These include a dedicated power button which here feels slightly superfluous, as - as noted - the camera can be activated by sliding open the lens cover to take a shot, or simply pressing the playback button on the rear to review any image captures. Press this however and the camera readies itself for the first shot in a second, which is commendably swift. The largest control is the shutter release button, which, like the on/off button, is set into and falls flush with the body for maximum compactness.

A half press of this and auto focus point/s appear on screen framed in green with a beep of affirmation that focus and exposure has been determined and the user is free to proceed and take the shot. Do so and a maximum resolution top quality JPEG is committed to memory in around three seconds, screen blanking out briefly and then freezing to display the captured shot as the image is being written to card or internal memory. The only control therefore standing proud on this camera is the knobbly zoom control lever.

Give this a nudge and the zoom powers swiftly and silently through its range from maximum wide angle to extreme telephoto in all of two seconds. Nudging back and forwards more gently results in the zoom taking incremental baby steps, though it's hard to be particularly precise in this manner.

Start recording video with a press of the shutter release button - there's no on-screen 'record' button, meaning that you actually have to have video mode selected before filming can commence - and you'll discover the full extent of the optical zoom can be accessed here too, which is a blessing. The screen also loses the black bands from its edges and the full width of the LCD becomes your viewfinder. If you like the aspect ratio when shooting stills can also be altered, from the default 4:3 to 16:9 though inevitably you do lose something in resolution, with either 11 megapixel or two megapixel images being offered in this setting.

Set back from these controls, on the ridge that slopes down toward the backplate LCD, are a built in speaker and the dedicated playback button, as previously mentioned, being narrow and lozenge shaped and therefore requiring fingernail precise activation. Those with larger hands may find the T99 just a little too petite and fiddly, as the on-screen function icons are similarly small as a default.

This being a fully auto point and shoot camera, some of the manually adjustable settings that might have been given their own controls as time-saving shortcuts on enthusiast models - such as being able to access and change ISO settings - are instead located within the main menu options, meaning that it takes a few button presses to find and implement them.

Also included within the menu screen are an additional operational mode - easy mode, which enlarges font and button sizes as well as paring down the adjustable options to flash, self timer and image size - making the camera virtually idiot proof one might say and useful if you're handing it over to someone to take a snap who isn't familiar with it and might otherwise make accidental button presses.

Likewise included on the menu screen and adjustable with a tap of the relevant icon are an exposure compensation slider (+/- 2EV), access to burst and macro settings, along with white balance, focus (multi AF, centre AF or spot) plus metering choices (multi, centre or spot). It's here that face detection options also 'live'. With the default being auto detection, this can be changed to bias a particular face when it is touched on screen and therefore specified, or to bias adults or children in particular. The camera can also be directed to search for a smile and fire the shutter automatically when it finds one via the relevant smiley face icon on the T99's opening screen - which is useful for those self portrait shots. The intensity of the smile to be captured can also be specified, from wry thin smile to open mouthed belly laugh.

Sony has also seen fit to include its dynamic range optimizer ('DRO') settings on the T99 for theoretically more even exposures, which are also manually swappable, with 'standard' being the default, and the other choices being either to switch it off entirely or to go for the more intensely processed 'DRO Plus' option if the former doesn't satisfy.

When the T99 is in playback mode, users are given the opportunity to carry out a limited degree of in-camera retouching (trimming, red eye retouching or in camera sharpening) or 'paint' onto the image if scribbled annotations are your thing. There are also the usual slideshow with music and calendar date options found as standard features of the Sony Cyber-shot range. At each point the screen is quick and nigh instant in its response to each inquistive touch and proud, so users can get to where they want to be quickly and easily.

Moving back to the outer body for a moment, the smooth side flanks of the T99 are devoid of any features entirely, except for a means of attaching a wrist strap at one side. The base meanwhile features an off centre screw thread for the attachment of a tripod, centrally located output port, and shared compartment for battery and card (SD or Memory Stick Pro Duo sharing the same slot) protected by sliding catch.

The provided wafer-slim battery is good for 230 shots from a full charge, which is average for the T99's point and shoot class. But what about the images the T99 provides; are they average in themselves or do they transcend the T99's relatively modest point and shoot aspirations to deliver potential masterpieces for your mantelpiece? Read on to find out.