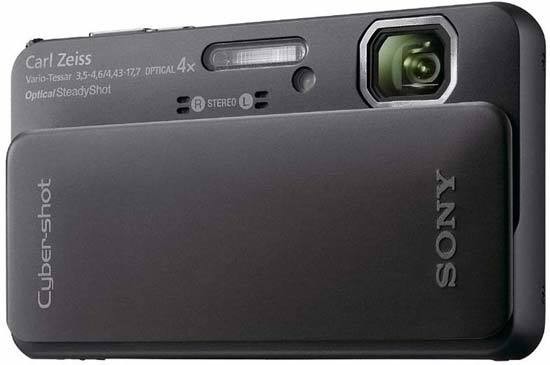 Like its predecessor in the DSC-TX5, the TX10's lens starts out at a wider than most 25mm, which sounds good on paper for its ability to shoehorn in holiday landscapes as readily as group shots of friends and family enjoying the pina coladas.

However in practice we noticed some softness towards the edges of the frame at this extreme setting, particularly noticeable with people shots. That said, most point and shooters will be pleased with the results straight out of the camera. As a default the colours here are well saturated and exposures pleasantly even  - which means good results are to be had with minimal effort being made, as should always be the case with the TX10's class. Plus, you don't want to be fiddling around with settings whilst traipsing frozen Arctic wastes or even when taking pictures in the rain - as close as we got to such unpleasantness during our test period.

In terms of what this svelte Cyber-shot offers to make it stand out from the crowd, the Sweep Panorama feature is fun for anyone wanting extra wide landscapes (wider than the 25mm lens will already allow that is), though what you gain in fun you lose in critical sharpness when downloaded and viewed on a desktop. Sony claims the technology has been refined to better align images even when people are moving in the frame, so we tested in during rush hour outside Waterloo station - perhaps the most unforgiving test of all. Though as expected we got a disjointed and at times curtailed sequence as the camera struggled to keep up with commuters rushing home, we were pleasantly surprised by how well it did do.

In terms of how the TX10 performs in low light, with an adjustable ISO range stretching from a higher than usual starting point of ISO125 though to ISO3200 - again no change from its TX5 predecessor - there is theoretically the ability for the camera to cope with a wide range of lighting conditions. Whilst the additional auto ISO setting works well, surprisingly good results are to be had up to and including ISO1600, and even though ISO3200 is noticeably softer it's still a setting that would be usable.

So if you need to push things a bit in low light - despite the fact that there's a lack of anything approaching a decent grip on the camera - as on the TX5, the TX10's Exmor R CMOS sensor does seem to live up to its manufacturers hype. Plus, if you do want to shot in the near dark, decent results can be had from choosing the Twilight mode/s among the scene mode options.

There are 6 ISO settings available on the Sony CyberShot DSC-TX10. Here are some 100% crops which show the noise levels for each ISO setting.

The Sony CyberShot DSC-TX10 handled chromatic aberrations very well during the review, with limited purple fringing present around the edges of objects in certain high-contrast situations, as shown in the example below.

The Sony CyberShot DSC-TX10 offers a Macro setting that allows you to focus on a subject that is just 1cm away from the camera when the lens is set to wide-angle. The first image shows how close you can get to the subject (in this case a compact flash card). The second image is a 100% crop.

The flash settings on the Sony CyberShot DSC-TX10 are Auto, Forced Flash, Slow Syncro, No Flash, with a Red-eye Reduction option in the Main menu. These shots of a white coloured wall were taken at a distance of 1.5m.

The Sony CyberShot DSC-TX10's maximum shutter speed is 2 seconds, which is not good news if you're seriously interested in night photography. The shot below was taken using a shutter speed of 1/30th second at ISO 500.