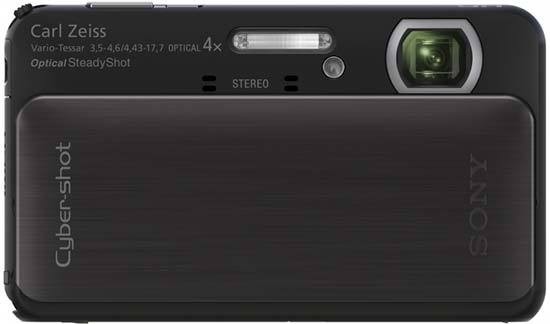 The Sony Cyber-shot DSC-TX20 is a slim-line digital compact camera that boasts a number of interesting features such as a 16.2 megapixel Exmor R CMOS sensor, Tracking Focus, Background Defocus, 1080i Full HD video, Optical Image Stabiliser and 3D Sweep Panorama. On top of that, it's water, freeze, dust and shock proof. In our test, we look to see if these features are as impressive as they sound and what other delights it has hiding under it's brushed metal covering. The Sony Cyber-shot DSC-TX20 costs around £280 and is available in Blue and Black.

To look at the Sony Cyber-shot DSC-TX20 digital compact camera, you'd be mistaken in thinking that it's another run of the mill model. That's partly because of the unassuming fascia and partly due to the lack of buttons on the back of the camera. In reality there's a lot to this little camera. Slide down the front cover and you're greeted by a Carl Zeiss Vario Tessar lens. It has a 4x optical zoom and the Stereo Sound microphones are also hidden behind the protective cover. Sliding down the cover will switch the camera on but it can also be powered up using the power button on top of the camera.

There are four buttons that adorn the top plate. As well as the aforementioned power button there's also a raised shutter release button, a small playback button and even smaller video direct record button. Many reviewers have speculated over the reasoning of still including buttons when you have a touch-screen camera. The reasoning is that users still like to know that there's some tangible buttons on the body. Like a safety net. That theory is bolstered by the replication of a playback button on the screen in the bottom right corner. Why include it there if there's a physical button on top of the camera? The zoom switch has been removed from the typical position of sitting around the shutter release button and is situated on the shoulder of the camera. This is to prevent the need for a circular shutter release.

There are lots and lots of features on the Sony Cyber-shot DSC-TX20 and to go through them all would create a vast article. We'll take a look at some of the more interesting features on the camera. For example, the 16.2 megapixel sensor is an Exmor R CMOS type. CMOS (Complementary Metal-Oxide Semiconductor) is a type of sensor commonly used in digital cameras. There are two popular types; the CMOS and CCD (Charge Coupled Device). The latter is said to provide sharper images while the CMOS is more fuel efficient. Sony's Exmor R sensor has been developed to further the quality of the output from the CMOS. It's been designed to reduce the amount of noise generated on it allowing to be more noise free in low light situations. This down to the way it's designed. The circuitry that normally surrounds each pixel has been moved to the back of the sensor. This allows more light to land on the pixel (with a normal sensor, it's partially blocked due to the circuitry) To look at an Exmor R sensor in a camera, it looks as though it's been fitted backwards so is called a Back Illuminated Sensor. This extra light makes the sensor more responsive in low light and therefore produces lower noise.

If you like taking pictures of people, pets or flowers, you'll desire a blurry background so the subject pops out of the photograph. The Background Defocus mode can be especially useful for this as it takes two pictures – one in focus, one slightly blurred. It cuts out the subject you want to stay sharp and pastes it over the blurry image. It creates an effect that photographers with DSLRs can create very easily because they have larger sensors on the camera to help achieve this. The smaller sensors on a digital compact camera can't do this as easily so need help.

Sony developed the Smile Shutter a few years ago and it's been plagiarised and developed ever since. It's a software program that not only detects a face but can also tell when the face is smiling. Once it sees that happening it automatically takes a picture for you – no need to press the button. You can now adjust the intensity of the smile so if someone is simply smiling a bit, the camera won't take a picture if you've selected Big Beaming Smile mode.

Look on a digital camera these days and you'll be hard pressed to find one without a dedicated video button so you can film at any point without having to go into a pesky menu and choose the correct mode. The Sony Cyber-shot DSC-TX20 pushes the envelope one step further with Duel REC. It allows you to record video and take a photograph while filming. Interestingly, these are high resolution images and not the same resolution as the video. The resolution we managed to record at was 12 megapixel which looks like the highest you'll get. Still it's a reasonable setting although other settings such as metering and focusing are at the mercy of the video mode.

The Sony Cyber-shot DSC-TX20 is actually a lot tougher than it appears on the surface. Opening the switch locked battery door and HDMI/USB port compartment and you can see rubber seals around the edges. That's because the TX20 is waterproof to 5m (16ft). It's also freeze proof, dust proof and shock proof. However, this doesn't appear to be the crowning glory of the camera. After all, there's no mention of it whatsoever on the box. The only indication is a splash of water behind the photo of the camera which could just be artistic expression. However, it's quite a major feature of the camera. After all, this “slip in the pocket” digital compact camera will be very interesting to the extreme sports crowd that don't want a camera to look like a submarine.

The touch-screen is sensitive enough that it obeys your commands while not being too over zealous. We did find on occasion that while the camera was in our pocket, the cover would slide down and switch the camera on. This leads to the possibility of a damaged lens and/or embarrassing photos of the inside of your pocket.

At first, the menu systems of the Sony Cyber-shot DSC-TX20 can be a little over whelming. Switch the camera on and the screen bursts into life with lots of information either side of the main viewing screen. The reason behind is simply down to the lack of buttons on the camera. On the left, there's a desktop with your favourite options on. If you don't like the default options, you can change them in the menu. Access to the Main Menu is gained at the top left corner of the screen. To the right is a bit of information with regards to the settings you've already selected such as Resolution, Aspect Ratio, Display, Shooting Mode and an on-screen Playback button. You can change these last three by pressing the icons to enter a menu with the exception of the Display button which simply removes all the information from the screen. To return the information, you have to hold the button down (press on it) for a few seconds.

Pressing the Program Menu button will open up an entire screen of shooting options such as Intelligent Auto, Superior Auto, Program mode, Video, Panorama Options, Background Defocus, Picture Effects, Scenes and 3D Shooting. The latter is compatible with a 3D television. Pressing the ? Button at the top of the screen simply asks for verification of your choice before entering that mode. The options are easy to see and are also attractive with a faint picture in the background of each tile.

Continuous shooting has a Hi-Speed and Lo-Speed. In Hi-Speed mode, the burst rate is fast and short covering 10 shots in under a second. It then takes a further nine seconds to download onto the memory card. The cool part is when you're viewing the pictures in Playback. You get the option to tilt the camera side to side and the camera will scroll through the images as though they're television sequence. It's very clever and fun to use. In Lo-Speed, the camera once again takes 10 pictures but this time over a period of five seconds. It then takes a further 10 seconds to download (15 seconds in total). All images in Hi-Speed or Lo-Speed are taken at full resolution. Perfect for action shots.

From the switched off position, there are two ways to switch the Sony Cyber-shot DSC-TX20 on. Either by dragging the cover down to expose the lens or by using the power button on top if the cover is already down. If it's the latter then the camera will start up, focus and take a picture in 1.6sec which is very impressive. Using the cover was marginally slower at 1.8sec. Still, that's a lot faster than the 2.5sec average of a digital compact camera.

As we mentioned earlier there are two ways to enter the Playback Menu. We found ourselves using the screen more than the button on top though. The Menu button is present in the top left corner but has changed when in Playback mode. Now there's Calendars and Slide-shows, Retouch options and View modes. That's just a part of the first of two pages.

When looking at a picture in Playback, there's lots of information available but we noticed straight away that basic shooting information is absent such as Aperture and Shutter Speed, ISO, White-Balance and Metering. This information can be switched on in the Playback Menu.

In the box, you get a camera, battery and AC adapter. This links up to the USB cable in the box which then charges the battery by plugging it into the camera. There's also a wrist strap and paint pen for using the touch-screen.