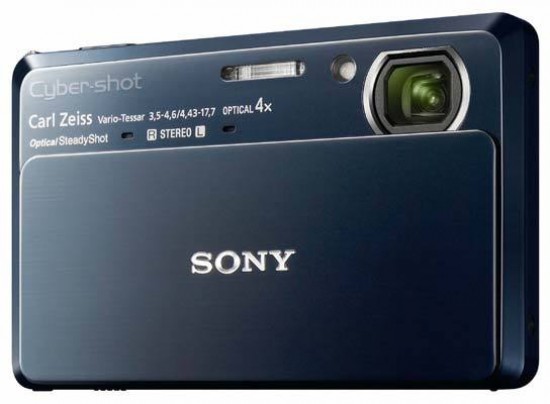 The ideal point and shoot camera is surely one that is as unobtrusive as possible, whilst still coming packed with the latest technological must haves. Could the credit-card sized Sony Cyber-shot DSC-TX7 with 25mm equivalent wide angle lens, which goes up against the likes of Fuji's Z800EXR, be that camera? At first glance the glossy, metal build compact with easy-to-use slide open and shoot lens cover/faceplate appears remarkably similar to the equally slender DSC-TX5 that we reviewed late spring/ early summer. But, chiefly, whereas that model reflected the seasons in being waterproof, this one isn't.

Powering up from cold in just over a second, in common with its sibling the TX7 is a model almost entirely operated by a widescreen ratio touch screen at its rear, here a welcome 3.5-inches to the TX5's 3-inches. The touch screen controls are clearly labelled and easily navigated. So for once this feature doesn't feel like a triumph of form over function. Everything is pretty much where it usually is, so you don't have to waste time hunting around, as on Sony's NEX hybrid cameras.

The LCD surface coating doesn't hide fingerprints well unfortunately, so you'll be constantly wiping it free of smears, or attaching the plastic stylus Sony provides in the box to the wrist strap that also comes with it. More positively, Sony suggests the monitor's 'TruBlack' screen technology minimises reflections and boosts contrast for a richly detailed view, even when outdoors in bright daylight. We were using the camera in a sunny environment and didn't have to resort to cupping a hand around the screen, so in that respect the hype rings, um, true. In terms of low light performance, selectable light sensitivity settings stretch from ISO80 at the bottom end to ISO3200 at the highest, matching that we'd expect for its class.

In terms of portability for anyone looking for an able photographic companion for that short city break meanwhile, the camera weighs 133g and sports overall dimensions of 97.8x59.5x17.5mm. As we'd expect from Sony, the build quality is high and the camera feels solid despite its diminutive size. It's available in dark blue, silver or red, which on our review sample appeared more cough sweet purple.

The TX7 boasts a reasonable feature set for its price tag in the region of £300. At the heart of the camera resides a 1/2.4-inch Exmor R CMOS sensor (Sony's flagship chip) offering what we'd describe as a 'sensible' pixel count of 10.2 megapixels (same as the TX5). Also worth shining a spotlight on is AVCHD format video capability at Full HD 1920x1080 pixels and a frame rate of 50fps, a maximum (stills) continuous shooting speed of 10fps, while Sony's intelligent Sweep Panorama function that produces an elongated image if the user spins around on the spot 'sweeping' the camera in an arc, and as also seen on the TX5, again makes an appearance. It's fun if inessential and works rather well if you time the speed of your own movement just right, which takes a couple of goes. Shots are saved to either SD media Sony's own Memory Stick Pro Duo or 45MB internal capacity.

The lack of physical controls lends this Cyber-shot an attractively contemporary, minimalist appearance overall, though, unlike the TX5, this model finds room for a stereo microphone at the front. We also get the lens with internally folded 4x optical zoom mechanism over at the top right hand side of the body where it again falls prey to fingertips straying into the frame when shooting handheld. Next to this is a similar set up to the TX5; a lozenge shaped integral flash is incorporated next to an AF assist/self timer lamp. All these features are hidden by the lens cover when it has been slid shut and the camera is inactive. Expectedly there's nothing approaching a grip at all on the camera, which can make it difficult to hold rock steady. As a result we ended up with our fair share of soft images in lower lighting conditions, but perhaps a lower percentage than we might otherwise had got if it weren't for the Sony's built-in anti shake in the form of optical image stabilization.

The top plate of the TX7 is where what few physical controls there are reside. We get a stubby (and so rather fiddly) zoom control lever over at the far right, adjacent to a lozenge shaped shutter release button and next to this again, an on/off button inset into the metalwork to prevent accidental activation. Although opening or shutting the faceplate/lens cover also powers the camera up or down, this separate control is useful should one wish to quickly review images without otherwise exposing the lens.

A half press of the shutter release button and the camera determines focus and exposure in the blink of an eye. Take a shot at maximum 10.2 megapixel resolution and with barely perceptible shutter lag a shot is committed to memory in two seconds, the screen briefly freezing with a display of the captured image whilst it is written to memory. Switch to playback mode to review what you've just shot and left and right directional arrows appear at the bottom right hand corner of the screen for tabbing through previous images too.

Set back from the uppermost controls, where top plate meets back plate, are dedicated controls for playback, and a shared button for alternating between stills and video capture. This seems slightly superfluous as a red camcorder-style record button features on screen, a virtual press of which kick starts recording whatever alternative shooting mode might have been previously selected. Whilst the wider screen is a boon for watching video playbacks, in regular 4:3 stills capture mode, black bands crop the image either side. These disappear once you've hit the red video record button however. It has to be noted that older PCs and Macs will struggle with replaying the AVCHD format video files the TX7 records in, if they'll be able to access them at all, so fortunately there's the option to drill into the set up menu and swap to MPEG-4 format at 25fps if required.

In terms of stills photography meanwhile there is a choice of seven different record modes. The default snapshot setting is of course Intelligent Auto - being Sony's scene and subject recognising 'smart' mode - which is mostly reliable for those who do just want to point and shoot, plus there is also a program auto setting for those who want to get hands on to a greater extent. In this mode menu functions that were previously inaccessible in 'iA' mode suddenly become so.

Among the other offered mode icons on screen we have the intelligent Sweep Panorama mode fast becoming a standard feature of Sony Cyber-shots and NEX models, an Anti Motion Blur setting, a useful Handheld Twilight mode, an equally handy and reliable Backlight Correction HDR mode for shooting against the sun whilst maintaining both shadow detail and highlights - which in practice delivers a rather washed out looking shot - plus, finally, a Scene Selection mode. Press this for access to 12 pre-optimised settings for photographing pets, fireworks, underwater scenes and even the food on your plate courtesy of the gourmet mode also found on the TX5.

When shooting stills there's the further option to adjust the point of focus simply by tapping a portion of the LCD screen - again, a feature introduced with the TX5 - thus providing the ability to bias attention to something or someone who might not be traditionally dead centre of the frame.

The above shooting modes aside, also presented within the black bands either side of the screen are a means of kick starting movie recording with that red virtual record button - along with a means of controlling the flash (merely off or on in intelligent Auto mode) and altering self timer settings (10 seconds, two seconds or off, along with a  couple of self portrait options). Continuous or burst shooting can further be selected here, with a choice of 'Hi', Mid, or 'Lo' speed options, the camera's maximum being a respectable 10 frames per second as mentioned at the outset of our review and which it rattles through machine-gun like, the resultant shots slowly appearing as a collected series of thumbnails on its rear screen for review.

Tap the 'menu' icon top left and even more options are presented to the user. It's here we're offered the chance to switch to 'easy' mode or select 'smile shutter' mode, adjust image size and ratio - with the ability to shoot stills in 16:9 format rather than 4:3, albeit with a resolution drop to 7MP at best - plus select macro mode, adjust exposure compensation (+/- 2EV), and metering modes, switch on face detection and turn display settings on or off.

Top left of this icon-led menu screen - and only found once you've accessed menu itself - is a small toolbox icon; its placing meaning that it is easy to overlook. Tap this inquisitively however and four further sub folders are presented. In decreasing order of importance, the top one, denoted by camera and spanner icon, is a Shooting Settings folder, just below which is a second 'Main Settings' folder, then a 'Memory Card Tool' folder, and lastly Clock Settings (date and time etc) weirdly get a folder all to themselves.

Going back to the Shooting Settings, it's here if shooting in Program Auto mode that the user can summon up the AF illuminator (or turn it off), as well as the compositional aid of on-screen grid lines, digital zoom, red eye reduction when using flash, plus blink alert to warn if a subject might have closed their eyes at the crucial point you fired the shutter. LCD brightness can further be adjusted. All the essentials you'd expect are here in fact, including the ability to alternate between capturing video in AVCHD or MPEG4 format.

In playback mode we have the further ability to view/search images by date via an on-screen calendars - or view them collectively as a series of thumbnails, the tapping of any one of which displays it full size on the screen. There's additionally the ability of course to view all images on the back screen in the form of a slideshow accompanied by a selection of different musical styles, or hook the camera up to your TV to do the same.

A press of 'menu' alternatively when in playback mode and, along with the menu options offered in capture mode we have the ability to paint or draw cutesy hearts onto images - the kind of thing beloved of Japanese youngsters - with a virtual eraser button also presented to wipe clean any such doodles. Limited retouching can also be carried out in camera - in the form of red eye correction, trimming or unsharp masking to add some saving grace definition to slightly soft shots and avoid having to do the same in Photoshop. And all this with the press or swipe of a fingertip.

If there's an obvious Achilles' heel on the TX7, apart from the lack of grip and lens positioning encouraging fingertips into the frame, it's that battery life is unimpressive, equivalent to some 115 minutes or 230 images according to Sony, but in practice amounting to around 130 shots. As operation is reliant on the screen and the larger LCD size also tempts you to review captured images frequently, the TX7 evidently sucks up power quite quickly.

And yet, as we found with the TX5, once you've surveyed all the options and got used to the touch screen operation the TX7 is easy and fun to use. There are more options here than provided on regular point and shoot cameras so that users won't get bored easily. But, at the end of the day it's image quality that counts more than a collection of features and functionality, so how does the TX7 measure up? Read on to find out.