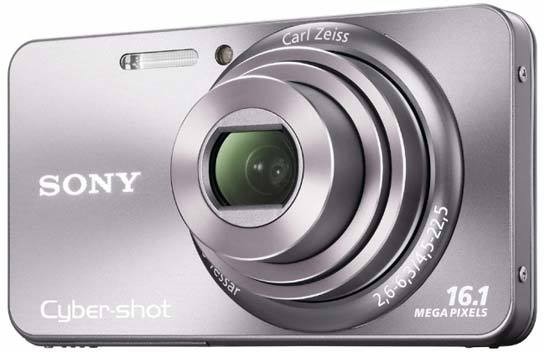 Not content with ruffling the feathers of the bigwigs in the DSLR market, Sony are also marching on the sexy digital compact cameras with the W series. The new W570 features 16.1 megapixels on a CCD sensor collecting light through a Carl Zeiss Vario Tessar lens that sports a 5x optical zoom starting at 25mm and ending at 125mm in 35mm terms. On top of that, there's also a BIONZ processor, smile shutter, sweep panorama and D-range optimiser, all for a very reasonable price. Aimed at the happy snapper needing a small, slim compact to take on holiday to get the best possible results without a massive price, the Sony Cyber-shot DSC-W570 is available in black, silver, violet or pink and costs around £149.99 / $179.99.

Sometimes it's possible to look at a camera and realise that the design is so astonishingly simple that rivals must have looked at it and slapped their foreheads. The Sony Cyber-shot DSC-W570 employs a simple, small rectangle with a large lens barrel on the front accompanied by a small flash. The shutter release button echoes the shape of the camera applying a running theme of rectangles. The power button is sunken into the body to prevent accidental switching off of the W570 while shooting. On the back, the zoom rocker sits at the top to be used by the thumb while just below on the edge of the camera is a switch for selecting shooting, panoramas or video. A small navigation pad is joined by playback, menu and help/delete buttons.

The Sony Cyber-shot DSC-W570's 2.7 inch screen is the biggest difference outwardly between the W570 and W580 as the more expensive (by roughly a tenner) W580 has a 3 inch screen. It makes us wonder whether releasing an entirely different camera simply with a smaller screen is really necessary but the reduced size in the monitor does mean that the dimensions of the camera are also reduced. There's not a lot in it, mere millimetres which again makes us wonder whether it's worth it.

The build quality of the W570 is very nice. Because of the diminutive size, the components are all packed inside the metal case and as we turned it over in our hands, we could feel that there's no space inside. The SD/SDHC/SDXC memory card and battery share the same compartment on the bottom of the camera. The door feels thin and flimsy but it doesn't move or bend. There's also a locking switch to make sure the door doesn't get opened by accident although the battery has a catch to hold it in.

Sony's menu system uses a simple formula of placing the options down the left side of the screen and expanding sub menus into the rest of the screen if necessary. In the main menu you can change the program mode, resolution, ISO, white balance, metering and focusing among other things. Interestingly, there's no macro mode on the W570. There's no dedicated button for it on the outside of the camera, there's no option in the menu system and there's no mention of it in the help system. We had to open up the manual to try to get to the root of our question but even that threw no clues up.

The final option in the menu is a toolbox icon which is for accessing the set-up area of the menu. This disables the monitor from showing what the lens can see so you can focus solely on the functions within the menu. There are four tabs for shooting, main, memory card and clock settings. The shooting menu simply houses features which aren't used as often such as red-eye reduction functions, digital zoom and auto orientation. Scrolling down will go through the different tabs as they come to an end but if you know which tab you need, pressing left will let you scroll quicker through the sections.

Playback on the Sony Cyber-shot DSC-W570 can be quite a slow process. From time to time, the camera will check the database to ensure that everything is ok. While this is a good thing, it can take a few moments. It depends on how impatient you are. If you've used the memory card in a different camera and there are pictures on it, the camera will ask you if you wish to import them to view them on the W570. This also takes a few moments if you want it doing. When you first switch the camera on, it will prepare the memory card for use in the camera which takes a minute or so.

In the box is a wrist strap, lithium ion battery and dedicated charger. The USB cable that splits into three analogue video cables is a good idea to reduce the amount of cables provided but kind of defeats the object of the Full HD video because the analogue cables  lose all the high definition information. The driver CD comes with Sony's Picture Motion Browser software and the user guide on the same disc. Although the initial button asks you to install the user guide it is possible to simply view it without downloading anything.

Dynamic range is a term that's on everyone's lips at the moment and is a priority feature with manufacturers along with HD and intelligent auto. Every manufacturer has their own version of a dynamic range boost and with Sony it's called Dynamic Range Optimiser (DRO). On the Sony Cyber-shot DSC-W570 it can be adjusted in the main menu towards the bottom and there are three settings called off, normal and high. Sony sensors have a nice dynamic range anyway but switching on DRO gives a visible change to the picture by bringing more detail out in shadow areas.

Using the Sony Cyber-shot DSC W570 is very easy, it responds well to commands and the only real problem we encountered was that when we wanted to lock focus on an off-centre subject, the button is so sensitive that we found we took pictures accidentally. We got used to it but it took some time and plenty of wasted shots.

The camera is small enough to fit in a pocket and not take up the entire amount of space that's in there. While small is good, if you're the kind of person that has large hands you may find that the controls are too small for you to operate. Filming is recorded in 1280x720 HD video as stored as an mp4 format. Annoyingly, opening the folder up on the computer doesn't show the video files, you have to locate these in the PMB software on the disc.

We love the inclusion of the Carl Zeiss lens for superior image quality and the BIONZ processor is designed to gets pictures onto the card as fast as possible. However there's more information from a 16 megapixel sensor than the previous 14 megapixel sensors. Processing feels a bit slow and the update of the image database seems like it takes forever.

If we were to be over critical, we think that including a metal tripod bush would've been a big benefit and the USB port is open on the bottom of the camera which will get dirt and dust in it over time. However, there are many other cameras like this that it's unfair to be negative towards the W570 about it.