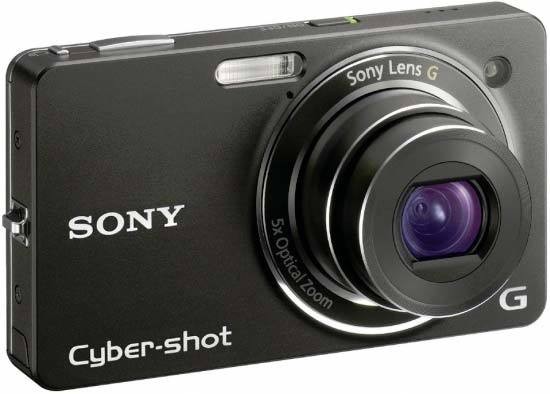 The Sony DSC-WX1 is the sister model of the slimmer and lighter TX1 that we reviewed a couple of weeks ago. Instead of the folded optics and sliding faceplate of the TX1, the WX1 has a more conventional 5x extending optical lens with a faster maximum aperture of f/2.4 and 24mm wide-angle setting, instantly making it a more serious proposition for more serious photographers. The WX1's lens is a joy to use, with the combination of the f/2.4 aperture and the Exmor R sensor making this camera very well suited to hand-held low-light photography. Also, having a 5x zoom in such a small package makes this camera more adaptable than you might first think, with everything from ultra-wide landscapes to candid head-and-shoulder portraits being within reach of the WX1.

The WX1 is still quite a minimalist and slender camera, measuring less than 2cms at its narrowest point and weighing less than 150g with the battery and memory card fitted, with a 2.7-inch 230k-dot resolution LCD screen at the rear. As you'd expect with a screen of that size on such a small compact, the WX1 has no optical viewfinder to fall back on. The other major difference between the WX1 and TX1 is that the former doesn't have the latter's touchscreen interface, instead offering a much more traditional button-driven user interface. Providing the only actual means of gripping the camera is the round mode dial on the rear of the camera which falls naturally under your right thumb - there is no handgrip at all on the front of the rather slippery metal casing. Also located on the front of the WX1 is the lens, a small and narrow window for the flash and a porthole for the self-timer/AF illuminator.

Press the small power button on the top plate and the Sony Cyber-shot DSC-WX1 readies itself for action in a just over a second, with the rear LCD bursting into life sound-tracked by a musical flourish (which thankfully can be turned off). The adequately sized shutter-release button has a definite halfway point, determining focus and exposure with a bleep of affirmation, focus points highlighted in green on the LCD. Go on to take the shot and a maximum of 10 megapixel resolution JPEG images are committed to memory in a single second, the screen momentarily blanking out and then displaying the captured image before the user can go on to take a second shot. The WX1's built-in microphone is also located on top of the camera, plus a tiny but handily placed button for turning on the various Burst modes, including that headline-grabbing 10fps mode.

Pressing the drive mode button brings up a number of options, including single shot, high-, mid- and low-speed continuous options. Out of these, the high-speed continuous mode is the most remarkable. The WX1 takes up to 10 full-resolution photos at a frankly astounding 10 frames per second, which is faster than most compact cameras and indeed most DSLRs too. The only fly in the ointment is that once the burst is completed, it takes over fifteen seconds for the camera to clear the buffer, during which you cannot take another picture. In the other two continuous shooting modes, the Sony WX1 also takes up to 10 pictures, but at slower speeds of 5 or 2 frames per second.

A fairly responsive and tactile thumb-operated rocker switch on the rear of the WX1 operates the 5x zoom and alternates between wide-angle and telephoto. The action of the zoom itself is leisurely smooth rather than rapid, gliding unhindered through the focal range in a single, steady motion. Underneath the zoom switch is the afore-mentioned mode dial, which has a nice positive action and lets you quickly switch between the various shooting modes that the WX1 offers.

In addition to the regular Program mode, Sony has included intelligent auto scene recognition in its line-up of shooting modes, accessed via this rear mode dial. This mode works in virtually identical fashion to the intelligent auto modes of Panasonic's and Canon's compact ranges. The user points the WX1 at a scene or subject and the camera analyses it and automatically chooses one of 11 pre-optimised settings to best suit. Adding to its snapshot simplicity, this feature joins enhanced face recognition and smile shutter functionality on board, the former mode biasing human faces in the frame and the latter mode firing the shutter when it detects a smiling subject.

The Sweep Panorama mode lets you capture a panoramic image very easily without the use of a tripod. All you need to decide is whether you would like to start from left or right, top or bottom. Then press and hold down the shutter release while doing a "sweep" with the camera in hand. Exposure compensation is available before you start the sweep, but the exposure is fixed once you depress the shutter button. After you are done with the sweeping, the camera does all the processing required, and presents you with a finished panoramic image. The catch is that it's of relatively low resolution: the shorter side is invariably 1080 pixels, whereas the longer side is 4912 pixels for a 'standard' panorama, and 7152 pixels for a 'wide' one. Note also that if you do the sweeping too slowly, or you let go of the shutter release button too early, the panorama will be truncated.

There are two more shooting modes that are new to the Sony W-series - Hand-held Twilight and Anti Motion Blur. In both of these modes, the camera takes six shots in a rapid sequence, typically at a high sensitivity setting and a (relatively) fast shutter speed, and then combines them into a single image that has somewhat less noise than a single shot taken at the same ISO and exposure settings. In my experience, the difference between the two modes is that in Anti Motion Blur mode, the camera is more willing to pick a really high ISO setting like ISO 1600 to maintain a fast shutter speed, whereas in Hand-held Twilight mode, it will only go as high as absolutely necessary to avoid camera shake at the chosen focal length. If light levels are truly low, however, the WX1 will pick a high ISO speed even in this mode.

There are a couple of options that are useful for taking more successful portrait photos. The enhanced Face Detection system automatically adjusts the focus, exposure and white balance for people in the frame, and can even be set to distinguish between children and adults. Smile Detection, which is toggled on and off by pressing left on the navigation pad, offers three self-explanatory options, Big, Normal and Slight. Used in conjunction, the Face and Smile Detection systems do result in more hits than misses, especially in contrasty lighting conditions, although all those smiling faces could ultimately freak you out a little!

Underneath the mode dial, you'll find a small button for playing back your images. Users have the ability to dip in and out of created folders of images or the calendar view, view thumbnails, select slideshows and choose transitional effects and accompanying music, or delete duff shots. Press the shutter button halfway and you're helpfully catapulted back into capture mode. And that's basically it. With a press of the Menu button in playback, users have access to a few in-camera retouching effects, including the ability to crop and sharpen an image and apply red-eye correction.

There's also a traditional round navigation pad which you can use to navigate through menus and options, in conjunction with the small button in the middle which activates whatever it is you've chosen. The four directions on the navigation pad also provide a quick way of setting the Display, Flash, Timer and Smile Shutter options. Finally, there are buttons for the camera's menu system and for deleting images underneath the navigation pad. The menu button accesses most of the camera's main functions - shooting mode, image size, macro mode, EV, ISO, white balance, Focus mode, Metering Mode and others - plus an icon at the bottom to open the four Settings menus. The latter includes the ability to deactivate the camera's 'bleep' that otherwise sounds at every button press.

Sony has fitted a dual image stabilisation mechanism in the shape of both optical SteadyShot and an ISO range that extends up to ISO 3200. If not quite class leading, it's better than you'll find on an average point-and-shoot. As with its recent predecessors, present and correct on the WX1 is the increasingly ubiquitous ability to shoot High Definition video clips at a maximum 1280x720 pixels video at 30fps, here in PC friendly MPEG-4 format with full use of the optical zoom and the ability to fire off a still image in the middle of filming. The movie mode also has its very own underwater shooting mode, plus the ability to change the EV level, white balance, metering and steadyshot options. There's also a direct HDMI output from the camera, useful for playing back the 60 minutes of footage that can be stored on a 4GB Memory Stick (Duo or Pro variety), although sadly there's no HDMI cable supplied in the box.

The bottom of the Sony WX1 features a standard screw thread for attaching it to a tripod, alongside which is a narrow flap with lockable catch that protects the shared lithium-ion battery and removable media (an optional Memory Stick Duo or Pro variety with a hardly worth it 11MB internal memory to fall back on). Sony claims the battery is good for up to 350 shots or 175 minutes of video from a single charge, which is fairly long-lasting but nothing out of the ordinary.