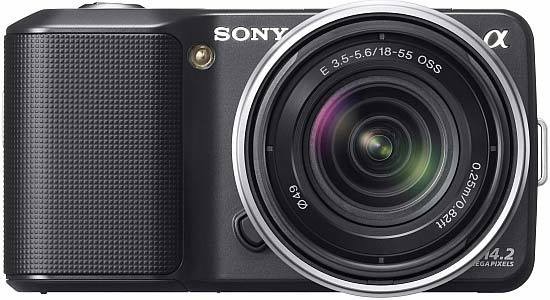 All of the sample images in this Review were taken using the 14 megapixel Fine JPEG setting, which gives an average image size of around 4.5Mb.

Viewed on the desktop there's an overall softness to the NEX-5's images that we hadn't expected - a soft sheen rather than digital crispness - which could well be down to the all-purpose nature of the zoom lens we had in for testing as much as sensor performance. Where it didn't disappoint was in the reproduction of colour, an area in which Sony traditionally excels.

The warmly saturated colours most closely reminded us of the performance of Panasonic's G-series - the GF1 readily trumping Olympus' Pens in head to head comparisons on image quality alone - while the Sweep Panorama images are a definite improvement on the video grab-style results we'd formerly seen from Cyber-shot point and shoots. We wouldn't suggest that you should buy the camera for this feature alone - visually arresting though the results can be - but throw in High Def video in a choice of AVCHD or more readily compatible MPEG4 format (as utilized by our test grabs) with stereo sound, and this feature, coupled with a better lens than traditionally found on a camera with this small a form factor, means the NEX-5 starts to look more appetizing when viewed as an a capable all-rounder rather than specialist tool.

With sharp results achievable when shooting handheld at maximum telephoto - and even at night-time thanks to the handheld Night Shot mode unexpectedly found within the scene mode options which fires a brief rapid burst of images to compensate for shake - at maximum wideangle there is some slight barrel distortion, but this is not overly distracting. Edge to edge sharpness is similarly reasonable, though - another Sony regular - pixel fringing makes an appearance between areas of high contrast.

Like its rivals the NEX-5 is not a like-for-like direct replacement for your DSLR just yet, but a better option to take out when you can't be bothered to lug around a DSLR than the other alternative of a point and shoot pocket compact. In that regard, for many the Sony's picture quality will be more than 'good enough'.

In terms of low light photography the NEX-5 does pretty well. Noise is fairly unobtrusive up to ISO 6400, the look of the image at that high-ish setting as good as results taken at ISO 800 on standard compacts. This suggests ISO 12800 as not a stretch too far, and so it proves. Inevitably you're getting a noisier image but not one that's very noticeably much softer. Thus low light shooters have broader options at their disposal, and spec that isn't just there for spec's sake.

There are 7 ISO settings available on the Sony NEX-5. Here are some 100% crops which show the noise levels for each ISO setting:

The Sony NEX-5 has 3 different image quality settings available, with Superfine being the highest quality option. Here are some 100% crops which show the quality of the various options, with the file size shown in brackets.

The Sony NEX-5 handled chromatic aberrations very well during the review, with limited purple fringing mainly present around the edges of objects in high-contrast situations, as shown in the example below.

The 18-55mm and 16mm lenses don't allow you to get very close to your subject in Macro mode, as shown below. The first image shows how close you can get to the subject (in this case a compact flash card). The second image is a 100% crop.

The flash settings on the Sony NEX-5 are Autoflash, Fill-flash, Slow sync and Rear flash sync, with Red-eye reduction available in the Main Menu. These shots of a white coloured wall were taken at a distance of 1.5m.

The Sony NEX-5's maximum shutter speed is 30 seconds and there's also a Bulb mode for even longer exposures, which is excellent news if you're seriously interested in night photography. The shot below was taken using a shutter speed of 4 seconds at ISO 200.

The Sony Cyber-shot DSC-HX5 allows you to take panoramic images very easily, by 'sweeping' with the camera while keeping the shutter release depressed. The camera does all the processing and stitching and now even successfully compensates for moving subjects. The main catch is that the resulting image is of fairly low resolution.

Upgrading to firmware version 2.0 installs an additional 3D Sweep Panorama mode on the virtual on-screen shooting dial alongside the regular (2D) Sweep Panorama. If you're lucky enough to own a compatible 3D HDTV, download the samples below to experience the full 3D effect.