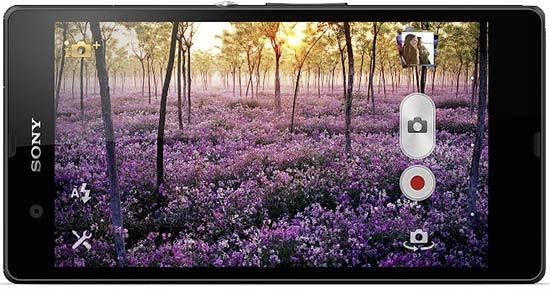 All of the sample images in this review were taken using the 13 megapixel JPEG setting, which gives an average image size of around 3Mb.

The Sony Xperia Z produced images of good quality during the review period. This camera handled noise well, not becoming too obvious until ISO 800, with the fastest setting of ISO 1600 not really worth using, a great performance for a tiny image sensor with such a high pixel count.

Chromatic aberrations were in evidence but were well-controlled, with some limited purple fringing effects appearing in high contrast situations. The images were a little soft straight out of the camera at the default setting and require some further sharpening in an application like Adobe Photoshop.

Macro performance is good, although the camera often failed to focus properly, while the built-in flash is a little underpowered. The Steadyshot anti-shake system works well when hand-holding the camera at slower shutter speeds. The camera can capture enough light for some after-dark situations.

The High Dynamic Range mode combines two shots taken at different exposures to produce one image with greater dynamic range than a single image would produce. Sony's now tried-and-trusted Sweep Panorama is a joy to use. The Picture Effects quickly produce special looks that would otherwise require you to spend a lot of time in the digital darkroom.

There are 5 ISO settings available on the Sony Xperia Z. Here are some 100% crops which show the noise levels for each ISO setting.

The Sony Xperia Z's 3.6x zoom lens offers a wide-angle focal length of 28mm in 35mm camera terms, as illustrated by this example:

Here are two 100% crops which have been Saved as Web - Quality 50 in Photoshop. The right-hand image has had some sharpening applied in Photoshop. The out-of-the camera images are just a little soft and ideally benefit from some further sharpening in a program like Adobe Photoshop. You can also change the sharpening level after the picture has been taken.

The Sony Xperia Z handled chromatic aberrations well during the review, with some purple fringing present around the edges of objects in high-contrast situations, as shown in the examples below.

The first image shows how close you can get to the subject (in this case a compact flash card). The second image is a 100% crop.

The flash settings on the Sony Xperia Z are Auto, Fill Flash, Red-eye Reduction and Off. These shots of a white coloured wall were taken at a distance of 1.5m.

The Sony Xperia Z has a Handheld Twilight scene mode that promises to take good night shots - in reality, the results are disappointing to say the least.

The Sony Xperia Z has an antishake mechanism which allows you to take sharp photos at slower shutter speeds than other digital cameras. To test this, we took 2 handheld shots of the same subject with the same settings. The first shot was taken with Shake Reduction turned off, the second with it turned on. Here is a 100% crop of the image to show the results. As you can see, with Shake Reduction turned on, the images are sharper than when it's turned off.

The Sony Xperia Z allows you to take panoramic images very easily, by 'sweeping' with the camera while keeping the shutter release depressed. The camera does all the processing and stitching and even successfully compensates for moving subjects.